I'm working on an ugly Christmas sweater with a Lilypad Arduino.

Previously it was setup to power LEDs on each side of the sweater using just the voltage from the digital output pins (alternating sets of LEDs to the beat of the music), while also operating an inductive buzzer (connected to a PWM output on pins 5 and Arduino gnd) to play Christmas tunes via modulation. This was obviously pretty under-powered and I'd like to nearly deafen/blind my friends with this project.

So this year is V2 that uses transistors as switches to pump closer to 18V from 2x 9V batteries to the LEDs.

I was having an issue getting this setup to use a separate power supply and still operate properly with the buzzer. I'm using NPNs (TIP31) that are setup the following way (from memory, so hopefully I recounted it right, but the setup is functional):

Arduino powered by a separate onboard battery. 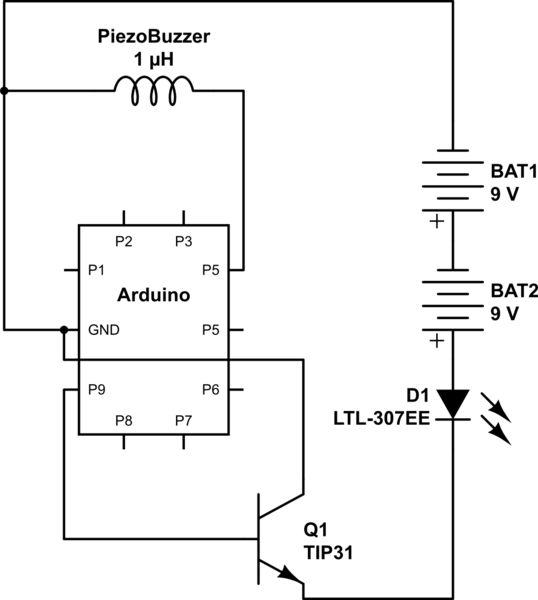 My issue was that, when the buzzer is connected (even if its not being operated) the LEDs were staying lit. I'm pretty sure it has to do with the Arduino board and the separate power supply for the LEDs sharing a common ground. Disconnecting the ground from the (-) terminal of the buzzer confirms this.

Is there some way I can set this circuit up to have separate grounds, and would that even help? I figured I could use optoisolators to fully isolate the circuits, but I don't have time to order any in. Is there a solution simply using the NPN transistors I have available? Total novice here, so please bear with me!

Your NPN power transistor seems to be connected up wrongly. 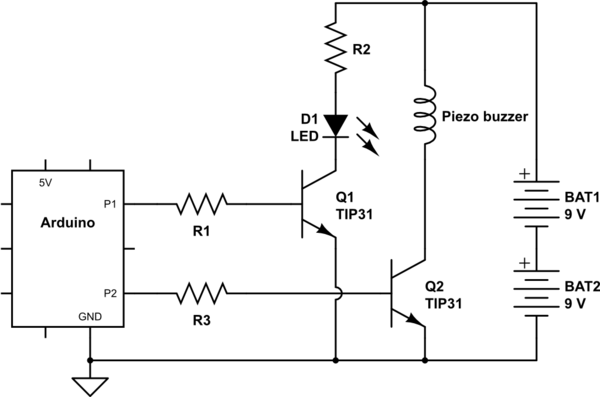 Perhaps your LED is actually an 18V LED module that has current-limiting built in?

Note: I believe piezo buzzers don't draw much current, you probably don't need a TIP31 to drive it. Check the specs and choose a more suitable transistor. To be connected as shown, the piezo buzzer should be rated for more than 18V.

Not the answer you're looking for? Browse other questions tagged arduino transistors switches piezo-buzzer lilypad or ask your own question.

6
Connecting arduino and separate power supply grounds
2
Can I supply a 12V buzzer with 18V?
8
Turning on multiple leds with arduino using transistor
1
Issue with driving multiple LEDs via transistors
1
Powering and controlling multiple 12V LED strips with Arduino LilyPad USB
0
8 Candidate Buzzer Circuit
2
Should I have had a resistor before my transistor?
8
9-volt battery connected to transistor controlling LEDs with Arduino
1
NPN or PNP for multiplex seven segment display?