I have a kitchen weight scale containing four half-bridge load cells, each cell associated to one foot of the scale.

I want to hack it to use it as a pressure sensor and link it to an Arduino microcontroller.

With resistance measurement, I have deducted the sensors were linked using this configuration: 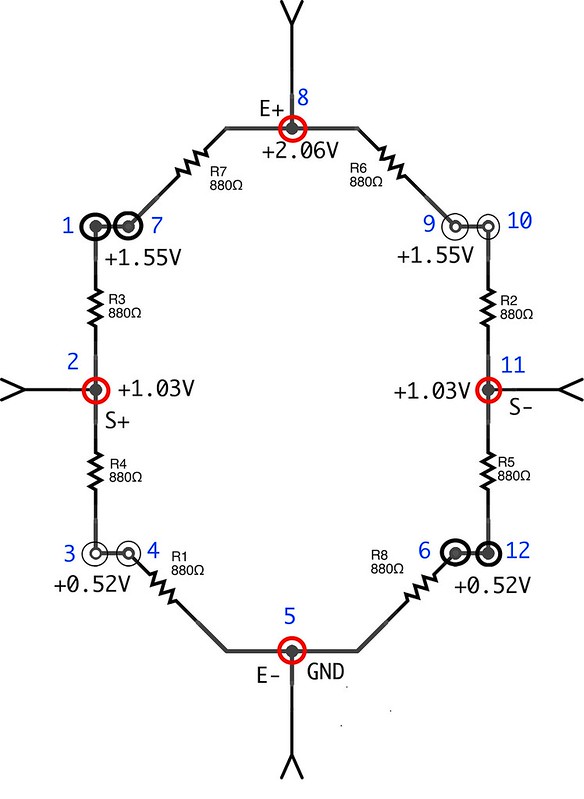 I have removed the original PCB and connected the sensors together the same way and also to an opamp (INA122) using the E+, E-, S+ and S- connections.

However I do not have consistent values according to the place where the pressure is applied.

I am now thinking about building four parallel bridges, each containing one load cell and three regular resistors. Each bridge would be connected to its own opamp. This would allow to better calibrate the output of each bridge and improve the balance between all of them.

If the load cells are arranged such that the left and right halves of the bridge move in opposite directions, then the difference between S- and S+ will increase when weight is applied.

For maximum sensitivity and linearity, you want to have one Wheatstone bridge with four active elements, and not four separate bridges.

I think your wiring arrangement is ok. However, I would bet that one of the half bridges is wired backwards.

To determine which one might be wired backwards, I would connect a digital volt meter to the points labelled S+ and S-. I would make a note of the reading with no pressure applied.

I would then apply the same known weight to each corner (half bridge) one at a time.

If I guessed correctly three voltage readings will increase (or decrease) in one direction and the fourth will decrease (or increase). The odd one is wired incorrectly. If two increase and two decrease, I would reverse the wiring on decreasing ones.

Think of each load cell as a cantilevered beam with two Strain gages (SG). One is in the direction of the strain, the other in the direction of no strain. This one acts as a temperature compensator. Because the SG is a long multi-folded fine wire element occupying a small area epoxied to the beam. So, temperature strain can change its resistance by many %, therefore the compensating no strain SG. This visualization will help to find why you have a problem. The cantilever beams may be not equalized or the balance bridge is incorrect.

Not the answer you're looking for? Browse other questions tagged arduino load-cell wheatstone-bridge hacking or ask your own question.

11
3-wire load cells and wheatstone bridges from a bathroom scale
0
What is the strain gauge resistance variation of a 3-wire loadcell?