Using a Zener diode to ease a voltage regulator

My question is: Is that also possible to use this configuration with a 10V zener diode: 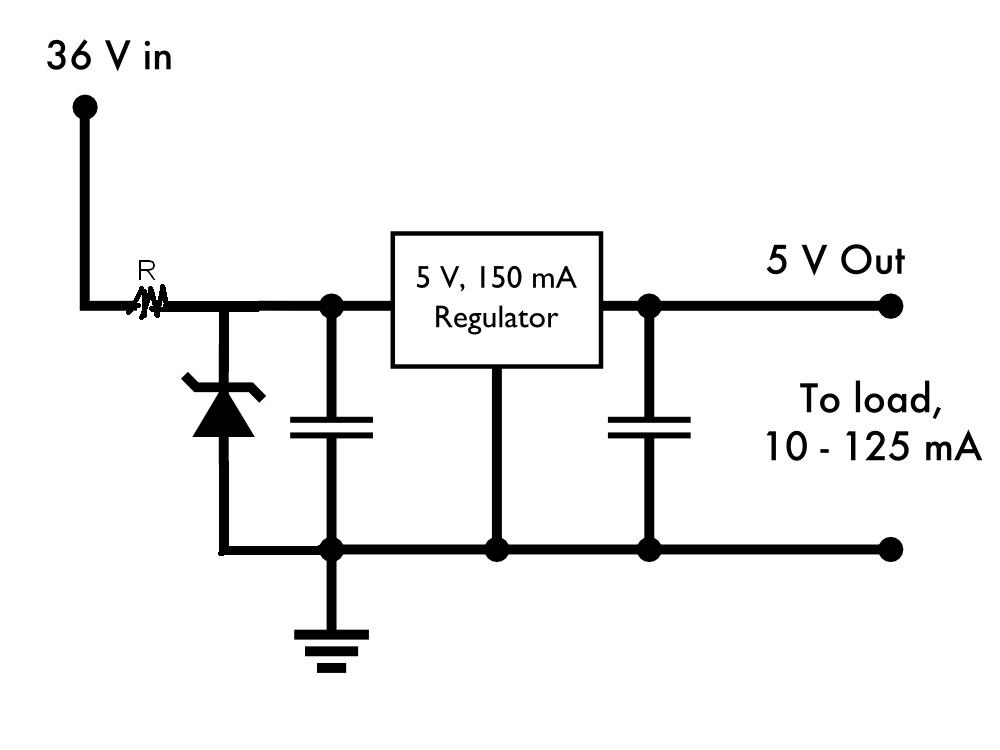 Is my figure applicable?

Which config would you prefer? Why?

If I had to solve this problem with Zener diodes, I would put several of them in series, rather than shunt. You need to drop 36V down to the neighborhood of about 7.5-8V. That's about 28V: four 7V Zeners in series, for instance. They just have to be able to handle the continuous current, and dissipate the heat. Since your current draw milliAmperes are not huge, it seems doable. Each Zener: 7V drop, about 200 mA current, hence 1.4W dissipation. Maybe 7V Zeners can be found which can dissipate 1.5W. Actually the Zeners can be a little smaller in value, since the regulator can tolerate a larger dropout. We can choose a regulator with a bigger current rating, and put a heat-sink on it, then let it work down from a larger voltage than 8V.

In the shunt arrangement, you're relying on the series resistor to drop the voltage, with the help of the Zener. The arrangement is sensitive to the current draw. The less your regulator draws, the more current the Zener has to shunt. Essentially you have to hedge between the resistor being large enough to protect the Zener from overcurrent under minimum load, and yet small enough to allow current under maximum load without the voltage dropping too far down.

As a rule of thumb, I wouldn't do this kind of thing if it required more than one Zener, or if that one Zener had to have more than a single digit Zener voltage to do the job. Powering 5V from 36V is best done with a DC-DC switching converter.

No, a 5 V zener in that circuit won't work in front of the 5 V regulator. As others have pointed out already, regulators have a dropout voltage, which is the minimum input voltage at which it can maintain its rated output voltage. Usually you think of it in terms of the headroom the regulator needs. The ancient but robust 78xx regulator series is notorious for requiring a lot of headroom, usually around 2.5 V.

However, the zener is a bad idea for another reason. The resistor and zener basically form a shunt regulator. These are very inefficient in that the shunt causes the output voltage to go low by drawing current. A shunt regulator has a constant input current, regardless of what the load is doing. If the load isn't taking the current, then the shunt is.

Power efficiency may not be a big issue, but getting rid of the heat usually is. That is usually bulky and expensive.

The best answer power-wise it to replace the whole thing with a switcher. There are plenty of switcher chips out there that can supply 150 mA from 36 V in, although they aren't quite as simple as a linear regulator. You will have to add a inductor and a few properly selected capacitors. This is all in the datasheet for the switcher chip though, so mostly it's about following the directions carefully.

If you really really don't want to use a switcher for some reason (there aren't many good reasons nowadays, ususally this is a religious thing), at least use the zener to make a quick and dirty linear regulator. Something like this:

The zener and R1 still act as a shunt regulator, but the current it draws is so small to be irrelevant with respect to the 150 mA of your load. Q1 and Q2 provide a lot of current gain, probably around 1000 minimum together. That means the R1-D1 shunt regulator only needs to supply 150 µA for the full 150 mA out.

Note that Q2 does the heavy lifting, which is why it is a power transistor. This is still a linear regulator, so you can't escape the fact that (36 V - 5 V) * 150 mA = 4.7 W of heat will end up being dissipated somewhere. By making Q2 drop most of this voltage, it will take most of the heat. I show Q2 as a TIP41, which is a power transistor that comes in a TO-220 package. It can handle that power if provided with a proper heatsink.

Again, a switcher is a better answer here. It will be smaler and cheaper than just heat sink alone.

In order to get 5V out of the regulator you must have more than 5V going into it. This minimum figure should be stated in the data sheet for the regulator you intend to use. For a 7805 for example the drop out voltage is 2V so you need a minimum of 7V input to the the regulator so you may want to choose an 8V2.

So we may choose a 200 ohm resistor. The dissipation in the resistor is

Since you have now edited your question: yes you could use a 10V zener diode but the lower the value of the zener in this configuration the less power is dissipated in both the zener and regulator.

Note: the power in the zenner becomes

Depending on the exact type regulator you use, you could use a 6 to 8V zener diode, but you would not solve your problem, just move it to another spot in the circuit. Remember that a zener diode also has a maximum dissipated power and so does the resistor.

A standard zener diode has 400 or 500mW maximum dissipated power, at 8V and 400mA that would mean a maximum 50mA current through the zener. The power dissipated in the resistor in this case is already 1.2W. This is very inefficient.

Drawing more than 50mA and tuning the resistor for this situation, but stil using the 500mW zener diode is bad practice. In this case when you detach the load from the power supply the zener diode will instantly burn.

Does it work? Yes

Should you do it? No

What is a better solution? Find a power supply that doesn't source 36V but more along the lines of 8V. Another solution would be to use a DC-DC buck or step down converter that can take the 36V directly. These things are cheap on ebay, efficiency is much better and they are more reliable in this configuration.

For a 5V regulator the zener will need to be greater than 5V.
Regulators have a "dropout voltage" which is the minimum (Vin-Vout) difference that they will tolerate and still work correctly.

The required dropout voltage depends on the regulator that you choose. Some LDO (Low Dropout) regulators only need maybe 0.1 to 0.2V minimum for Vin-Vo to function correctly. Some like the LM317 family require typically 1.5 to 2 volts dropout voltage.
In your example a 6V8 zener would give you 6.8-5 = 1.8V dropout nominally. In practice the difference may be more than that as a lightly loaded zener will usually have Vzener > Vrated.

In your example the zener provides two possible forms of protection. It limits the Vin to minimise dissipation when loaded, BUT its main aim is to limit Vin_max when the regulator is unloaded. Many regulators have Vin_max of 35V or more BUT some are rated at Vin <= 20V or 15V or even only about 8V for a 5V regulator.
Microchip have a number of regulators where Vinmax is not very much more than Vout. Using a zener as shown may allow a low Vinmax regulator to be used.

Note that the zener will dissipate most power when the regulator is dissipating little or NO power - ie has no load. If protection against high Vin is not needed then the zener is also not needed - a series input resistor is enough. The resistor is sized in resistance such that it allows enough headroom for the regulator under maximum design load.
eg say
Vout = 5V,
Vsupply_min = 36V min
Iout_max = 150 mA
Required minimum headroom = 1 V say.

Not the answer you're looking for? Browse other questions tagged voltage-regulator zener or ask your own question.