Correct use of Flyback or Snubber diode across Motor or Transistor?

Which of these are "correct"? Or does each have a separate purpose?

As a note, the diodes are normally listed as external 1N400x type diodes (on TIP120 Darlingtons), not the internal body diode of the BJT or Mosfet.

Final note, I have seen a few schematics that have both diodes, one across the coil and another across the CE terminals. I assume that one is just redundant without really affecting the circuit in that case, is that a wrong assumption? 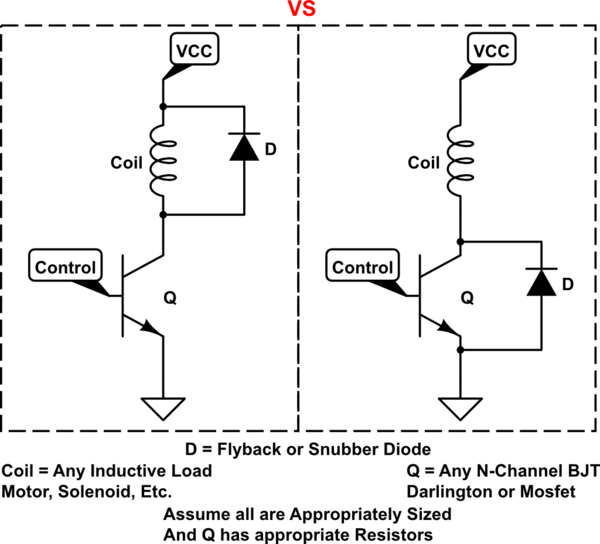 Consider the operation of the circuit.

It should be noted the allowing the voltage across the coil to reverse to an higher voltage means the current can decay more quickly which is why you sometimes see a zener in the right hand circuit or more than one diode in series in the left hand one.

A zener can work in both but a diode wouldn't

For the left it would just function a diode (with some supply clamping..) For the right it will rapidly discharge the coil (if rated correctly - tvs)

For the left it will be a normal chopper with a free wheel path. For the right you have a dead transistor

The latter can't possibly be correct. The induced current flows in the same direction that the original current did, and a reverse-biased junction diode won't help. The voltage that builds up from such a current across the now near-infinite resistance is what damages the transistor in the first place (the Zener works by allowing the current to flow past once the voltage reaches a given maximum). That the transistor is still operational after switch-off in such a configuration is dumb luck.

The inductor is causing a high voltage peak because it the current path is interrupted. The current will try to find the a new path and until it does, it increases its voltage. Best alternative

The left circuit is the best of the two, it suppresses the voltage spike at the source. If the voltage across the inductor rises, the diode starts conducting until the energy is all dissipated in the circuit.

The right circuit attempts to do the same thing, but relies on power supply having a low impedance path. This is not always true and some voltage regulators don't like reverse current to be fed into its output. Bad alternative.

The zener or MOV alternative suffers from the same issue as the right circuit, it relies on a low impedance path through the power supply. Bad alternative.

I personally don't like 1N400x for this use because it is rather slow. For small currents (<100mA) I prefer a 1N4148 which is much faster. For larger currents I would check one of the various selection guides on Internet.

You want to use the circuit on the left (whether you're using a standard diode or a diode+Zener combo) for two reasons:

The back-EMF incurred by a fast turn-off of coil energizing current causes a rapid collapse of the coil's magnetic field, thus inducing a reverse current equal and opposite the current the coil had charged or saturated to. This negative current will take the resistive paths through which a negative voltage will result.

That danger presented to the switching element is best dealt with quickly and decisively with an anti-parallel, free-wheeling diode across the coil.

This reduces the EMI radiating path length, and simplifies the analysis by keeping the problem between the coil and the diode. That alone avoids any unnecessary reverse voltage breakdown stress on the junction of the driving transistor, as well as avoiding fancy zener selection to try and match the transistor's breakdown threshold, or worrying about spreading the power incurred between a coil and a zener, all of this being dependent upon switching characteristics, duty-cycle, saturation current etc., etc.

With a freewheeling diode, the only power you need to worry about is the power dissipated given the coil/core's maximum saturation current times the forward-biased diode's drop. Secondly, if the coil is going to heat-up by being snubbed, it will be heated at least as much, typically more by its being energized; the snubbing cannot dissipate more energy than the power it dissipated across the time it was energized.

The diode PIV can only matter in the perverse case of a very high supply voltage and a very lengthy, highly resistive coil.

If power dissipation in the diode is a concern at all, the duty-cycle can also be considered, as that may avoid heat-sinking or a constant Pd rating at least as high as the max Pd calculated.

A more detailed snubber analysis is generally a DFM (design for manufacture) refinement for maximizing a cost-effective, mass-produced product, which invariably puts reliability in the balance, as thermal management defines the rate of long-term breakdown in semiconductor devices.

For prototyping, the freewheeling diode involves the least number of terms in its selection, and is the most direct approach.

The capacitance presented through VCC means that from an AC standpoint, the cathode of the diode in the left hand diagram is effectively connected to the emitter of the transistor. It would appear, therefore, that there is little difference in the protection provided in both the left hand and right hand diagrams. Mr Dorian Stonehouse.

Not the answer you're looking for? Browse other questions tagged diodes protection inductive flyback or ask your own question.

8
What is the purpose of a diode connected to the pins of a motor?
24
When/why would you use a Zener diode as a flywheel diode (on the coil of a relay)?
6
Why would you bypass a zener diode in the flyback protection of a relay coil?
4
How can I tell if my power supply/regulator will accept backfed current?
3
Best choice between flyback diode or an RC snubber
0
Will utilizing a TIP120 transistor to control the power from 2 9volt batteries in series powering a 12volt fan generate heat?
1
Confusions with placing and sizing the flyback diode, TVS and Zener
-1
Choosing the correct flyback diode (if necessary at all)