I am puzzling over this schematic, the datasheet just says to follow their recommendations exactly, and doesn't give explanation of the IC actions or circuit functions.

The lower half is easy to understand, it deals with incoming rings, and splitting and directing the signal with the bridge.

I assume that R1 and c4 deal with the received signal.

The upper right part has me perplexed though. I assume between Q4 and Q3, one is the offhook signal, and the other the output. R2, Q5, and R11 appear like they could be the output gain, although they tie into Q3 as well??

I really want to up the gain on this circuit, our existing church sound system install has a circuit designed around this schematic, and I find it is not fully saturating the phone system adc, our volume is too low. The previous system we had based on a transformer had much better volume.

I have punched this into LTspice, its a little unclear at this point. Voltage on DCT gets the best response, as partially predicted by an answer below. I have use voltage values on pins based on SI AN94. A sine wave on DCT is the only that outputs a reasonable value. Not sure if I have telephone line modeled correctly, but ma shown seems reasonable. LTspice model 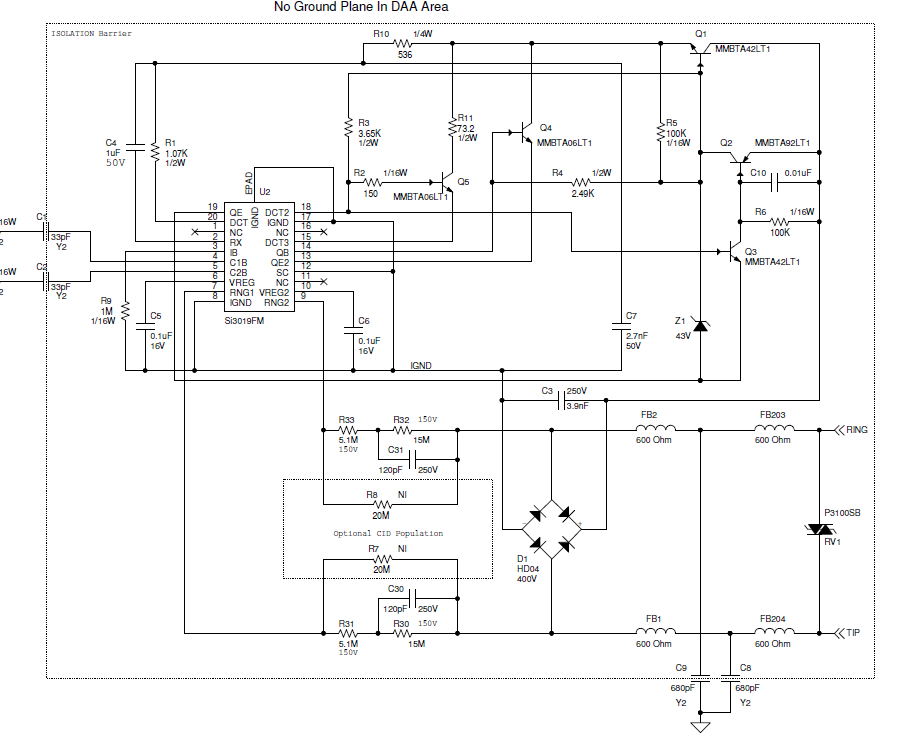 I'm not going to pretend to understand many aspects of how that circuit operates but I found United States Patent 6771696 that was issued to Silicon Laboratories that contains similar line-isolation circuitry. It also uses the same nonclemature which makes it easier to follow.

To answer the main part of question it appears the IC must have the line driver built-in. In the patent the DCT (DC termination) pin connects to the phone line via an attentuation resistor Rc. That is R1 in the above circuit so I'd try a value of say 820 ohms for a start and see what difference it makes. It sounds like you're connecting to privately owned equipment so won't get hassled by the phone company if you modulate it more than the usual phone standards.

From the patent and the datasheet block diagram QB, QE and QE2 are shown as part of the off-hook circuitry. In the patent QB is shown with an internal MOSFET that goes to ground so I'd say that Q4 is being used to take the line off-hook and Q5 is used for off-hook detection.

It's outside the scope of the patent and I couldn't find a good explanation for DCT2 and the associated Q2 and Q3. Judging from the circuit my guess would be it's disconnecting parts of the circuit while off-hook to reduce loading or some other compliance issue. But it's hard to know without a description / diagram of how the chip operates internally which I couldn't find anywhere.

You are looking at the wrong chip. As the datasheet says, this is a DAA (direct access arrangement), which is designed to provide isolation between the tip and ring pair going to the central office, and the audio circuitry in a phone.

This particular DAA consists of two chips: the Si3019, shown in your schematic and a companion chip, Si3056, not shown. The Si3019 is the interface to the CO line. As shown in your portion of the schematic, the entire part of the circuit associated with the Si3019 chip is surrounding by a dotted line labeled "ISOLATION barrier". There can be no direct audio connections to the Si3019 chip since it inside the isolation barrier.

Pins C1B and C2B of the Si3019 go off to the left of your schematic, and connect via capacitors C1 and C2 to the Si3056 chip. These two lines carry both audio and control information. This Si3056 chip is shown on the remainder of the schematic on page 18 of the datasheet which you left out. It interfaces to the remaining circuitry in the phone. Since the coupling between the two chips is strictly capacitive, this meets the telephone company's requirements for isolation.

Unfortunately there are no direct audio connections to the Si3056 chip either -- all the audio and control information is passed over a SPI interface (SCLK, SDI and SDO leads) to/from a host processor or DSP. The gain is adjusted by setting registers (15 and 38-41) inside the Si3056 using commands sent over the SPI bus so you can not do this externally.

I believe your only course of action is to add some amplification to the audio before it goes into the host processor or DSP.

Not the answer you're looking for? Browse other questions tagged transistors analog integrated-circuit telephone or ask your own question.