How is transition from three-phase distribution without neutral to three-phase consumption with neutral achieved?

A typical distribution grid supplies 6 or 10 kilovolts AC to a substation near the consumers. This is typically done with a three-phase line without neutral - just three wires going in parallel. Then there's a transformer that lowers the voltage to something like 110 or 230 volts AC.

The consumers typically have single-phase load and so here comes the neutral - we now have three phase wires and the neutral wire as the transformer output and those single-phase loads from different consumers are connected to phases in round-robin fashion so that the current in the neutral is hopefully minimized and phases conduct equal currents. Yet unless the load is perfectly balanced different phases will conduct different currents on the secondary side of the transformer and the difference is the current flowing through the neutral.

How is that addressed on the primary side and the high voltage line where there're just three phase wires and no neutral wire?

A typical distribution network in Australia will look something like the below. 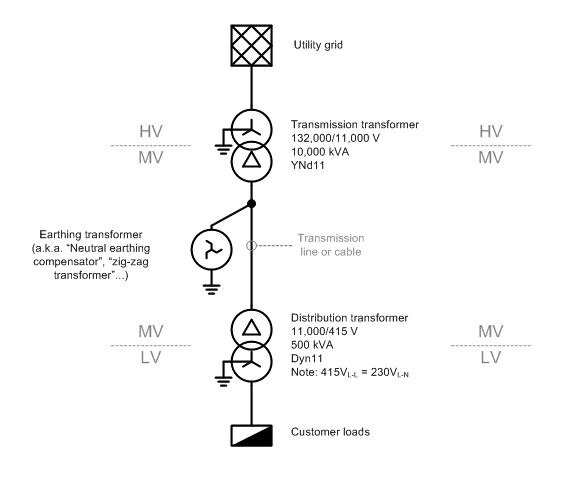 The "MV" section is a delta-connected "three-wire" system, so you are correct in asserting that there is no neutral wire. However, there is a path for neutral or "zero-sequence" currents to flow to ground, via the earthing 'zig-zag' transformer that is installed for this purpose. (The reasons for installing a earthing transformer deserve a separate question and answer.)

There are a few phenomena that may give rise to neutral current on a MV transmission line, but unbalanced LV loads, which cause a current to flow in the LV star-point/neutral, don't cause MV neutral current. 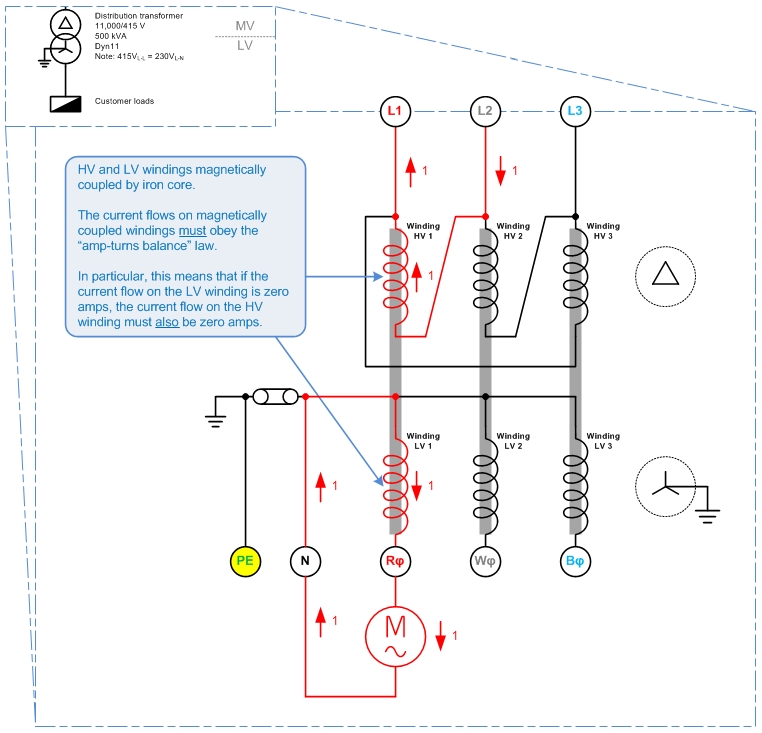 The picture above shows a delta HV, grounded-star LV system. There is a single-phase load which draws 1 unit (1 p.u.) of current from LV winding 1, with the current returning via the LV neutral.

What happens on the HV?

Each of the transformer's HV and LV windings are magnetically coupled by iron cores, so that the law of "amp-turns balance" must apply. I.e. conservation of energy applies between the pairs of HV and LV windings, HV1-LV1, HV2-LV2, and HV3-LV3.

By Kirchoff's Current Law, the 1 p.u. current in Winding HV1 must be sourced from HV line L1 and HV line L2. That is:

For a delta-HV, grounded-star-LV system, single-phase LV loads appear as phase-to-phase loads on the HV system.

This answers your original question: no matter how unbalanced the load on the LV side, no neutral current will flow on the HV side, so no neutral wire is needed.

This leads to the question of: "If no neutral wire is needed on the delta-connected system, why do we bother putting an earthing transformer on it?"

A couple of reasons I can think of - though I am uncertain on these, so don't quote me here... 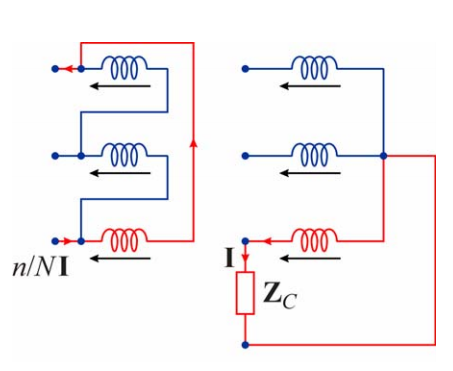 For reference, I got this picture from prof. Franco Mastri slides.

If you feed three phases with no neutral to a delta connected transformer primary side and connect the three output phase windings in star mode you get a neutral (centre point of the delta) plus 3 x phases. The secondary loads need to be balanced if balanced primary phase currents are required. Thusly:

Not the answer you're looking for? Browse other questions tagged transformer wiring high-voltage three-phase power-engineering or ask your own question.

15
Why are there only 3 wires on this power line?
0
How do distribution/transmission operators manage unbalances from LV grids?

2
What causes unequal phase-to-neutral voltages in three-phase distribution systems?
36
How do transposition towers in transmission lines work?
2
Grounding a 30KVA isloation transformer
1
Three phase balanced transformer network with b-phase fault
0
Is balancing the only mechanism that regulates the phase currents in a three phase system?
0
How to wire a three phase bridge rectifier
0
How are the individual homes connected in a 3 phase power distribution system (power grid) so that they have correct voltage?