I have a question about using an Arduino to control a MOSFET with optocoupler. The question is, the supply voltage may vary from 5 to 36 Volts. For example, sometimes I will use a 5V switching regulator with a 5V LED strip, and other times using a 36V to supply something else at 36V ratings.

I choose an Onsemi MOSFET: NTD70N03R, it has MAX VGS for 20V. So apply the maximum 36V directly to Gate will just kill the MOSFET right? After considering another topic, which used a resistor divider to scale down the gate voltage to half the supply voltage. This is OK under 36V supply, but I will have a voltage too low (5-0.4/2 = 2.3V, 0.4 is optocoupler's saturation voltage) using the half divider under 5V supply voltage. NTD70N03R's VGS(th) is 2V max, so 2.3V is just OK to "open" my MOSFET. But after considering this curve: 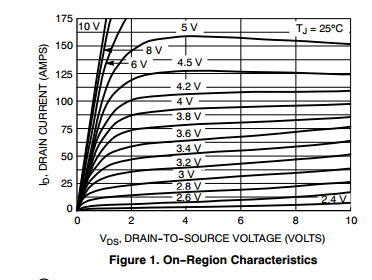 I found that the RDS(on) is larger under small VGS like 2.3V. So I want a larger VGS for smaller RDS(on), then I thought to use an 10V zener diode 1N4740A without resistor divider, here is my schematic:

I am a newbee in electronics, I don't know if all I said (calculate and design and so on...) is right. I will definitely wire up my circuit to test it later, but I am wondering if I can get some suggestions?

If you are using a logic IO pin that can drive 3.3V, the current into the opto's diode will be about: -

This is a current of about 6.4 mA. The current transfer ratio of the opto is a minimum of 50% therefore you can expect to deliver at least 3.2 mA to the emitter of the photo-transistor.

It could be more - according the the opto's data sheet, CTR can be as high as 600%. However, there are other problems to solve. If you look on page 7 of the data sheet you are pretty much limited to only being able to supply 5 mA from the device when the collector-emitter voltage is above 10V and because your supply is 36 volts you are likely to fry the chip if CTR is higher than 100%.

To avoid all of this I'd be tempted to use a voltage regulator from the 36 volts supply - bring it down to 12 volts then use the opto - no need for the zener protection.

The specified Vds_max will kill the MOSFET that you have specified.

The NTD70N03R MOSFET that you have specified has a max Vds of 25V so you should not operate it over about 20V, and even then with due care.

What max current do you anticipate?
How are you mounting it? What switching speed and duty cycle and general switching uses do you intend?

If your load is an amp or few then Rdson at anything over a few volts Vgs is going to be irrelevant. eg at 25 milliOhm and 2A you'd get 100 mW dissipation and maybe 10C rise when heatsunk to PCB as suggested in the datasheet.
At say 20A, (or even 10A) you'd have trouble keeping the FET alive.

The circuit is relatively sound as long as you stay inside specifications for all devices concerned. BUT the device you have specified suggests that you are trying to deal with 'rather large' [tm] currents for a beginner to electronics. All sorts of nasty little traps can occur if you are wanting to deal with the sort of current that this MOSFET can notionally handle. It would be wise to 'cut your teeth' at power levels that don't reward bad practice with instant flaming death (of device if not person).

The catch diode across the load is a 1N4007 rated at one amp. This may be OK for a few amps of load current depending on duty cycle and switching frequency. It's a slow diode and with some loads this may matter. For serious PWM speeds a gate driver will usually be required. (Say 100 mA to 1A gate drive capability). Large gate currents are only needed to charge and discharge the gate capacitance, but without them it can take far too long.

Tjhe gate zener D2 serves a very important function even if not needed for drive voltage clamping and should not be omitted. If you have an inductive load (and if you are not absolutely certain by design that you never will have then Murphy will sooner or later supply one) then Miller capacitance may (will) at some stage couple drain voltage back into the gate. D2 stops this over voltaging the gate and exceeding Vgs and destroying the FET. This is such a useful addition that it's worth including in almost any FET power application.

The proposed gate drive is OK enough for slow speed on/off switching, but at more than a fast crawl (say 10's to a few 100 Hz) the gate switching speed is going to be far too slow with attendant horrendous switching losses.

Not the answer you're looking for? Browse other questions tagged arduino mosfet diodes opto-isolator zener or ask your own question.

24
How to drive a MOSFET with an optocoupler?