I'm thinking about a simple home automation project, containing a Rasberry Pi, a Sainsmart SPDT Relay, I would like to switch the state of a ordinary bulb (ON , OFF) using both the relay and the old switch, so here if I'm in a remote area away from the bulb, I cannot get the bulb state exactly, is there any low cost way to get if the current exist or not?

I have found this current sensor but it is not the solution, it is not cheap, compared to the relays.

Andy already showed you how to connect 2 switches to 1 load. But this isn't the best solution for a home automation system. Better is to have all inputs (switches and buttons) connected to the Raspberry Pi, and at the other end have the actuators (relays and dimmers, for instance). Separate inputs from outputs.
You mention more complicated wiring, but on the other hand all your inputs can be low-voltage.

As for the number of relays you can connect, there's no limit. Use cheap 74HC595 shift registers and daisy-chain as many as you need. You'll only need 3 lines to control the chain: data, clock and latch. You clock the successive states of the 1000 or so relays into the shift registers, and complete the action by applying the latch signal.

The only other way I can think of is using an photodiode/phototransistor which change properties based on light. They are usually less than a dollar at your local electronics store.

So if you mounted the sensor in such a way that the diode gets activated when the bulb turns on you can get its state from the photodiode. You will have to calibrate the sensor yourself but you might even be able to get a value of brightness instead of just on/off.

You can learn more about photodiodes here: http://en.wikipedia.org/wiki/Photodiode

I would like to switch the state of a ordinary bulb (ON , OFF) using both the relay and the old switch

Here is an article from wiki about using a multiway switch. Here's a picture from the article: - 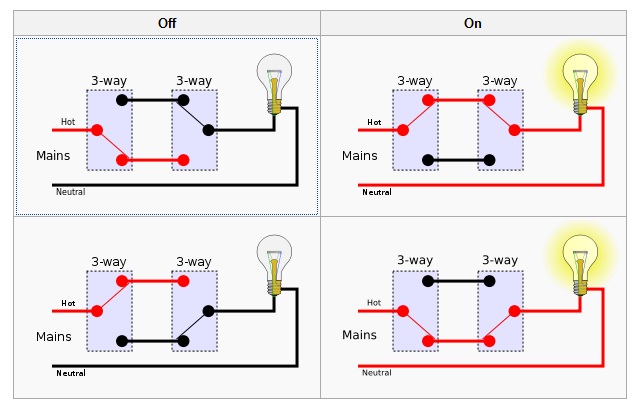 There are two switches shown - one is your old switch and one is your relay contact. No matter what the state of the lamp is, if the relay flips over, the lamp state will reverse. Ditto the old switch.

You don't need to know the state of the lamp to be able to switch the state.

An alternative would be to disconnect the old switch from the mains wiring and wire it to an input pin on the Raspberry Pi.

The Pi then controls the lamp from the relay, on command from either the switch or the internets, and will always know both the state of the switch and the lamp.

Not the answer you're looking for? Browse other questions tagged current relay raspberry-pi current-measurement or ask your own question.

0
Failsafe for home automation with Raspberry Pi
5
Switching frequency of a solid state relay?
1
Is there any wearout mechanism for a relay simply from current flowing?
2
I am having an issue with relays sticking
1
filament led bulb inrush current
1
Relay to control electrical plug and non-electrical wire
0
Help with circuit to alternate a light switch with solid state
1
Two way wiring with relay during power failure