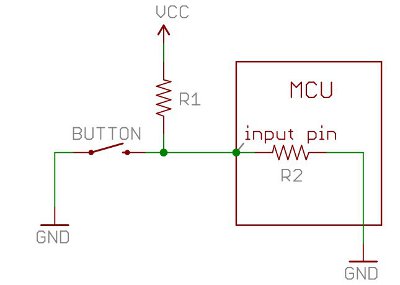 I understand that there are two possible current flows :

Because when the current gets to the "crossroad", it has two options to go to GND. One is through R2 and the other is direclty to GND. In other words this is like putting R2 in paralell with a resistor whose value is zero ohms. This lead us to a zero ohms equivalent, which is like a short circuit (left path).

In a intuitive way, it finds no resistance to go to the left while there is R2 if it goes to the right. The current division in a "crossroad" is a proportional division calculated by the resistance ratio of each path. Since one path is free, all current goes to there.

Logic circuits are operated by voltage much more than by current - in fact, in CMOS logic, inputs are essentially open circuits, so no current flows in or out of a CMOS input pin, execept during signal transitions.

If you visualize the button as being connected in the right side between the input pin and the ground pin of the mcu it will help you understand better why the current flows through the button that represents a 0 ohm resistance rather than the resistor that wants to resist the current flow. 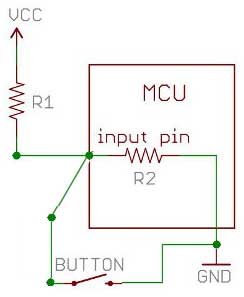 Think of it like this: The current is divided.

Now imagine the resistance of the button approaching zero. As it gets smaller and smaller, it takes more and more of the total branch current, until there's essentially none flowing through R2.

Now imagine the resistance of the button approaching infinity. As it gets larger and larger, it takes less and less of the total branch current, until there's none flowing through the switch.

When you understand that a closed switch is close to zero ohms (but never zero, unless we're talking about superconductors) and an open switch is essentially an infinite resistor, you'll understand why most of the branch current flows through the switch when it is closed, why no current flows through it when it's open, and why there's always a tiny trickle of current through R2.

An ideal switch can be approximated as a zero ohm resistor, but in practice there's always some small resistance with a closed switch. An open switch is easier to envision as a infinite resistor, so no current flows through it when open (air is a pretty efficient insulator, unless the voltage gets too high...)

Not the answer you're looking for? Browse other questions tagged resistors ground pullup pulldown or ask your own question.

14
Why does a pull-up resistor not stop current flowing to the input pin when the switch is open?
19
Pull Down Resistors
33
What makes a pull-up/down resistor strong or weak?
3
How does the pull down resistor work in this circuit?
0
Can this active-high scenario be achieved without an external pull down resistor
13
Pull-up resistor clarification
6
Do microcontrollers have a big resistance?
0
How does a pull-down prevent a "false 1" in a pin?
1
Is it generally OK to ignore the current in and out of a MCU pin when analyzing circuit external to the MCU?