I'm doing the exercises from Wisc-Online. This one

I think they are really great to learn and practice and have already done a bunch of their practical trainings. But here I'm starting to be crazy. I need to calculate \$I_{r1}\$ 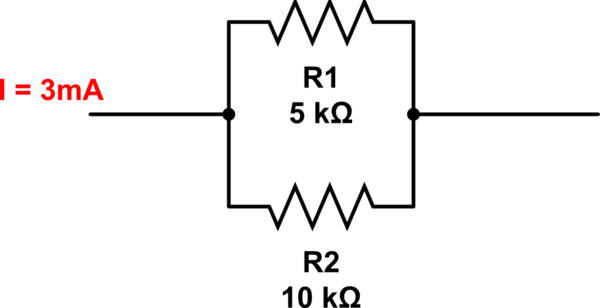 According to their lesson :

But the answer should be 2mA

And in that case I've got the correct answer.

Learn to recognize the simple cases. It will make your life easier.

The general formula for a current divider is a lot easier to remember in terms of conductance/admittance than instead of resistance/impedance. These are inverses of each other, e.g. the conductance \$G\$ of a resistor is \$\frac{1}{R}\$. Then it is the same exact analogue of the formula for a voltage divider:

For a two-resistor network that's:

For two resistors, the conductance form requires a few more computations (two more inversions) than the simplified form, but is easier to not get wrong. The thing to remember so that you get the final formula right is that unlike a voltage divider where the greatest voltage drop is across the larger resistor, for a current divider the larger current flows through the smaller resistor (which has larger conductance). Another way to remember it right is to check what happens if you put a resistor in parallel with a short circuit; then you expect no current to flow through the non-zero resistor. So if \$R_2 = 0\$ then you expect \$I_1 = 0\$.

Alas, the formula on the extreme right doesn't generalize as-is to more resistors. For three resistors it becomes much more nasty if you try to eliminate the reciprocals: 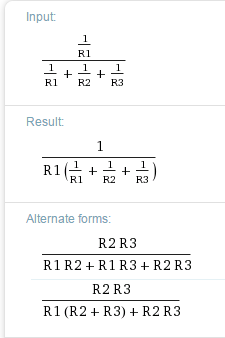 And speaking of that Wisconsin problem set, for a problem like 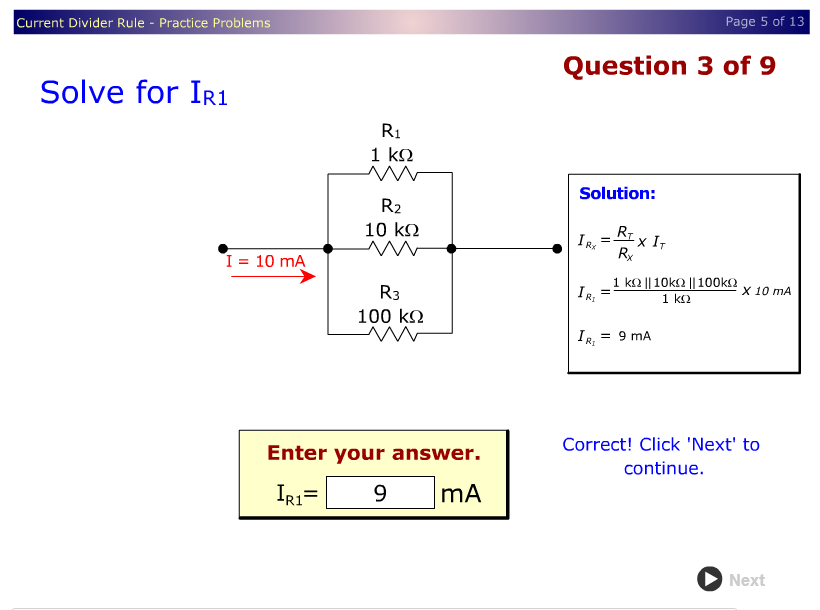 you could calculate the first current the hard way (it's actually 9.009009... mA) or just guesstimate it as 90% of the total (by ignoring the large, bottom resistor) but for the subsequent questions like the current through the next (and then final) resistors,

Assume the total current as it is = 3 mA (From the picture above). This current divided itself into the two resistors R1 and R2 and name the two currents as I1 and I2 successively. From the ohm law, we know that the voltage drop across the two different resistors but put in parallel structure will have the same voltage drop and called it V = I1 * R1 = I2 * R2. We know from the Kirchoff law that It = I1 + I2 or I1 = It - I2 or I2 = It - I1, then we can find the current that flows through each resistor by using the following formula,

Not the answer you're looking for? Browse other questions tagged current theory current-divider or ask your own question.

2
How would one go about finding the Norton equivalent current for this?
3
How to go on from here (Thevenin circuit)?