How do I model an LED with SPICE?

What diode modifiers are used in practice to model LEDs with SPICE (Berkeley v.3f5)? These are available to me:

I don't care much about high-frequency characteristics -- just would like to be able to match it's IV-curve within its operating specs (-10uA/-5V leakage to +100mA/+2.2'ishV forward): 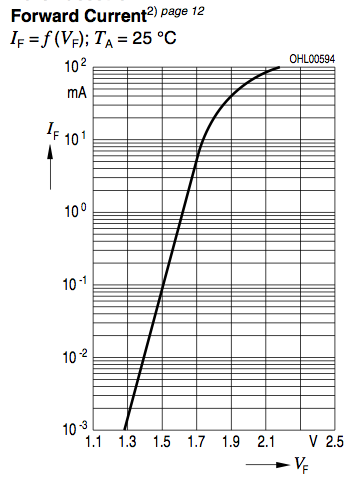 As you stated, there are 3 parameters that dictate the DC response of a diode. Those are the saturation current (IS), the emission coefficient (N), and the ohmic resistance (RS). I was able to fit the curve with a fairly high accuracy, so I'll document my model procedure.

The SPICE model for the diode closely matches the Schokley diode equation:

The first thing to do is to get a ballpark estimate of RS to use in the more accurate solutions. You can calculate the effective value of RS from the datasheet values by back-calculating for Vf using the measured If. The voltage difference between the input value and the calculated Vf can be used with the forward current to generate a resistance. At the higher currents, this will be a good starting value.

To plot the diode current using RS, you need to first calculate the diode Vf given a voltage for the resistor-diode series combination. Wikipedia lists an iterative function - it converges easily if the resistor voltage drop is significant. This function was easy enough to set up in Excel. For Vf values below 1.8, I hard-coded the input value because the iterative function did not converge. Then take this Vf value to calculate the If of the ideal diode. I plotted this with the original datasheet graph.

Using trial and error, you should be able to get a RS value that gets pretty good overlap with the datasheet values. All that's left is to throw the model together in SPICE to verify your work.

Below is my diode model that I verified using HSPICE. The simulation data is almost a perfect overlay for the datasheet graph.

I used this article, which helped a lot with the diode spice parameters.

I cleaned up my spreadsheet, and tyblu has made it available for download here. Use at your own risk, results not guaranteed, etc... etc...

First, I would point out that you can read additional diode parameters BV, Ibv and Cjo directly from the LED datasheet as "Reverse Current" Ir at Vr and as "Capacitance" C.

Adding to W5VO's great answer, I somewhat streamlined the process for myself the following way:

AFAIK, our model for the LED is essentially an Rs resistor and Is/N estimate diode in series: (-R->-D-)

Feel free to give it a try and comment.

Here are the ones I would use

If anyone is wondering why his/her single-page datasheet doesn't have an If/Vf curve, it's probably because he/she doesn't have the complete datasheet. I know that e.g. Optosupply only publishes the first-page summaries on their website, but they'll send you the full specs (with all the If/Vf, relative intensity and spectrum curves, etc.) on request.

You can also probably get usable figures for all the values by using a datasheet from another LED of same colour with the same chemistry (by the same manufacturer). Just check that the basic characteristics (like currents, voltages and wavelengths) match.

Great answers, but it is easy to solve the Shockley diode equation algebraicly. Just note that the "minus 1" in the formula is very irrelevant for forward currents that are an order of magnitude greater than Is, which is very small, say, 1E-12 A. Find just two points in the graph with easy to read I and V values, and plug these into the formula. Dividing both formula's eliminates Is, so N is easy to compute. Then fill in N in a formula to find Is.

Here are my LibreOffice Calc macro's in Basic:

If you look at the formula's, you might recognize simply the description of a straight line with slope of q/NkT but also of delta Log(Id) / delta Vd. 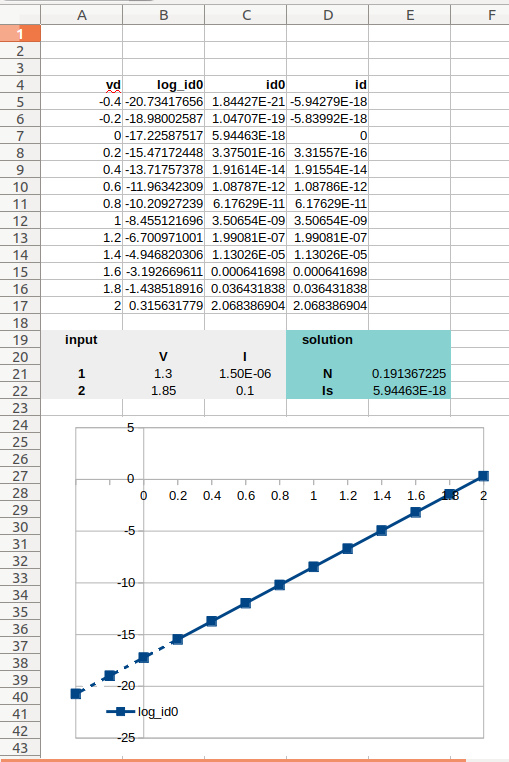 The column Vd are the voltages, Id is the diode current according to the real formula, Id0 is the current with the simplified formula where the "minus 1" is changed to "minus zero". As Id0 is a true exponential curve, you can take the logaritm in column Id0_log. (You cannot take the log of a curve that becomes zero and negative like Id) The plot is from Id0_Log versus Vd. In this plot I made the lowest part dotted, because there it is NOT the actual diode current anymore, but does show the value of Is at the intersection with the Y-axis.

Following the exponential curve to the left brings you asymptotally to zero. But the "minus 1" subtracts an amount of Is, so that the real diode curve goes through the origin and, with negative voltages, shows a reverse leakage current of amount Is.

If the original manufacturers curve would have been on a really large log plot, we could have simply used a ruler to extend the straight line downwards to easily find Is at Vd=0 and then compute N, instead of compute first N then Is with the above macro's. The ruler method has been described in "The Spice Book" by Andrei Vladimirescu (1994).

Not the answer you're looking for? Browse other questions tagged led diodes spice optoelectronics or ask your own question.

1
How to model IR LED Diode in SPICE
9
What happens if an LED is connected to a supply voltage greater than its voltage drop?
6
Simple LED model for circuit simulation
0
How to improve my curve fitting for an LED in spice
2
How do I model an LED with SPICE WITHOUT access to a Manufacturer's Datasheet
2
LED modeling with Shockley diode equation
1
Is it possible to calculate a diode's V-I curve?
1
Need help on building a passive Dim-to-Warm LED array
1
How do you use an LED's log V/I curve to force an exponential current change in the LED for a linear voltage change?
0
Capacitor not reaching supply voltage with LED in series
See more linked questions