I have a microcontroller and a small video/still "spy" camera (like these) that came in a case disguising it as a car remote. The microcontroller is a TI MSP430 value line model, though I could use an ATMEGA/ATTINY via arduino if the MSP430 doesn't work out.

I have the two devices sharing a ground, but each is powered by separate batteries because the camera wants about 4.7v and the MSP430 runs on 3.3v. 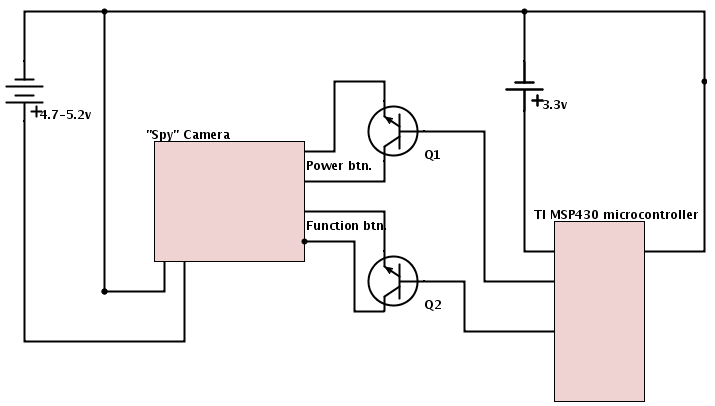 When I test it on a breadboard with LEDs hooked up to the transistors instead of the camera, my program works fine. It "presses" the power button for 2.5 seconds to turn the camera, then sends brief pulses on the Function button to tell the camera to take a picture.

But when I connect the camera, the camera turns on, waits a few seconds, and turns it off. When I check the function button's transistor, it looks like it never even triggers.

My question is, should I be using transistors this way? Or did I screw something up?

When you use transistors in this way, a series resistor must be included in the base line. 10k would be a good guess.

A transistor used this way sort-of works as a switch, but only in one direction. The emitter must be negative side (connected to the ground or - lead of the batetries). Your diagram does not show if this is the case, or whether you were even aware of this issue.

If you don't know about the connections inside the camera I think it may be safer to use an optocoupler (mcu on the diode side, camera on the transistor side). Then you don't have to worry about grounds and you don't risk frying you camera.

You still need a current limiting resistor in series with the diode. Try 1k for a start.

The power draw would be a bit higher than with a transistor though , because the current gain is lower.

2
Share battery between different voltage devices
2
Trying to read calculator key presses into PC via parallax propeller chip
0
Mode toggling circuit using only transistors, resistors, and capacitors?
1
Two way switch using transistors
2
Question regarding two transistors
0
I2C interfacing between two chips
0
Interfacing with Transistors
0
Dark sensor circuit by using two transistors
1
How to create a circuit to automatically raise/lower a height-adjustable desk?
4
MOSFETs not activating - is this transistor the problem and can it be subbed?