I have a device that is powered by the Arduino (+5V). 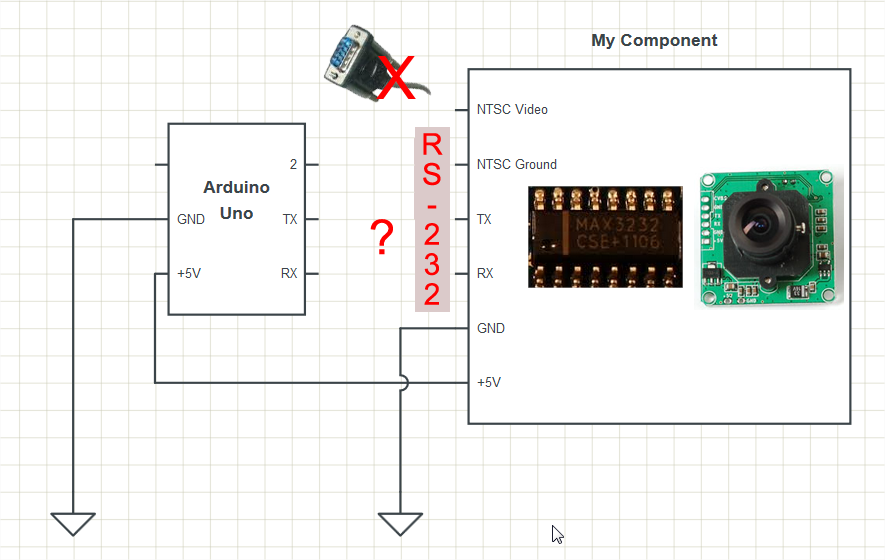 Unfortunatly, I don't have the tools or dexterity to remove the TTL/RS232 conversion manually.

My question is: is it possible to establish communication between the device and the Arduino with RS232 interface?

I think you are confused about the voltage level used to power the camera and the voltages used to communicate with the camera. The fact that the camera is powered with +5V from the Arduino is really irrelevant in this case.

Note that these two interfaces are not electrically compatible. Connecting an RS-232 interface TX line to a TTL RX line may damage the receiver. You cannot solve this problem in software.

If you mean connecting the AVR pins directly to a MAX3232 found at the camera side then you should avoid it because the (MAX3232) Tx pins transmits signals in a range of +5.5v to -5.5V that are not safe for the AVR.

Not the answer you're looking for? Browse other questions tagged arduino rs232 max3232 or ask your own question.

5
RS-232 Buffer circuit
4
Communication between a USB/serial device and an AVR (atmega/Arduino) microcontroller
0
TTL-level camera with MAX3232 installed - is that really TTL-level or an RS232-level?
0
RS232 non-inverting level shifter
2
Send analog audio through the rs232 port of a data transmitter
0
rs232-ttl converter problem
0
LG RS232 Commands partially working
0
How to find out whether serial standard is RS232 or TTL when stated as “serial(RS232/TTL)”