Why does ADC conversion time vary?

Currently I have an extremely simple program which basically sets up microcontroller's peripherals and the AD9850 and then goes into a loop in which it samples audio signal coming to the microcontroller's ADC and based on the results adjusts the output frequency of the DDS.

My problem is that the loop's execution time is not constant.

The loop is divided into three basic parts: In the first part, I get a sample from the ADC, in the second part, the required settings for the AD9850 are calculated and in the third part those settings are sent to the AD9850.

After doing some cycle counting, it turns out that the second and third part always last for 2670 clock cycles. This leaves me with the only suspect being the first part.

After measuring the execution time of the first part just by itself, I've noticed that it varies from as low as 100 cycles to as much as 8000 cycles.

Here's a nice graph I got from the debugger showing how the number of cycles changes with time:

I did look into the datasheet of the part and into the Tivaware Peripheral Driver Library User's guide and I couldn't find a reason why the sampling would have such drastic jitter. The ADC sampling plus conversion time is listed as 1 microsecond, which is around 80 processor cycles, since I'm running at 80 MHz clock frequency. This makes the loop duration in the area of around 100 to 200 cycles look OK, but I have absolutely no idea what's happening in the case when the time is in the thousands of cycles.

I have also read the errata for the ADC and as far as I can see, none of the numerous problems apply to my case. Also the part I have is an actual TM4 part, not an experimental XM4 part.

Here's the problematic part of the code:

UPDATE: I went ahead and did the test with pin wiggling and I got relatively similar results. On this image, a pin goes high and then immediately low as soon as ADC is done. This is taken with dithering and hardware oversampling disabled, with sample rate of 1 MSa/s and FIFO buffer depth of 1. 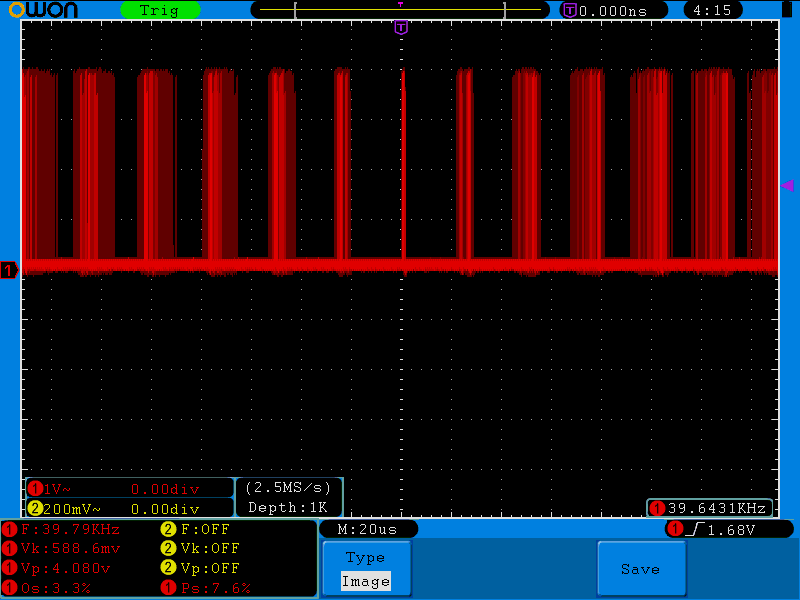 While there are reasons described by others concerning where your jitter may be coming from, being dependent upon things like conversion time (or even hidden branches in function libraries where each branch takes different times) is just poor practice for real time systems.

If you need low jitter loop time, you need to MAKE IT by creating a timer interrupt to give it to you. If you need speed, the timer should be set at your maximum time through your loops, plus a bit of head room. On a timer interrupt you should service everything that needs to be done based on your last ADC read, then do the next ADC read.

When this happens, the microcontroller does not reset itself. If it did, I would see that in the debugger.

I suspect that you are always running this under the debugger and you have set a watch on adcData because it's interesting data. The IDE is helpfully preserving that between runs. I will further guess that the TI processor supports hardware watchpoints on memory writes, and the debugger is using those to catch updates to adcData. Each time through your loop the debugger hits the watchpoint and stops for as long as it takes for the external debugger to read out the data and resume the chip.

If you kept the bit wiggling and ran without the debugger you could test this theory.

As a sidenote, the ADC acquisition time is supposed to be finite, but I have seen some variance in characterizing components. The datasheet likely gives a typical or a "guaranteed by design". Also, the validity of each aquisition isn't guaranteed due to noise, either from layout or otherwise.

You don't mention interrupts, but I see that you're clearing an interrupt flag in the code. If you haven't yet, try disabling interrupts globally. If any other interrupts are going off, they may be causing this jitter.

With a software-based loop, there are lots of things that can cause irregular execution. The most reliable way to get precisely sampled data is to trigger the ADC using a reliable source like a timer (which I believe you can do with no external hardware on this device). The same timer signal could trigger an ISR, where you can collect and use the result at greater leisure, or it could trigger DMA to copy samples into a buffer of some sort.

I suggest caution with libraries like TivaWare. They are usually written for convenience, not high efficiency. If you can track down the source code, you will probably find that they are doing a remarkable amount of housekeeping in those routines. Very often you will get much better performance by hitting the registers directly.

There are 3 most used types of analog to digital converters.

I suggest a Flash ADC would be best for your circuit. If you want work on the same hardware there are two thing you could do.

Not the answer you're looking for? Browse other questions tagged adc ti-ccstudio stellaris or ask your own question.