I've completed a few circuit board layouts before, however this is my first time doing a layout with a oscillator/MCU. After doing some reading (via this site and datasheets) I've come up with the following layout.

*Note that local ground connections on the top layer (MCU) are drawn over the silkscreen. This was done in MSPaint to increase readability. 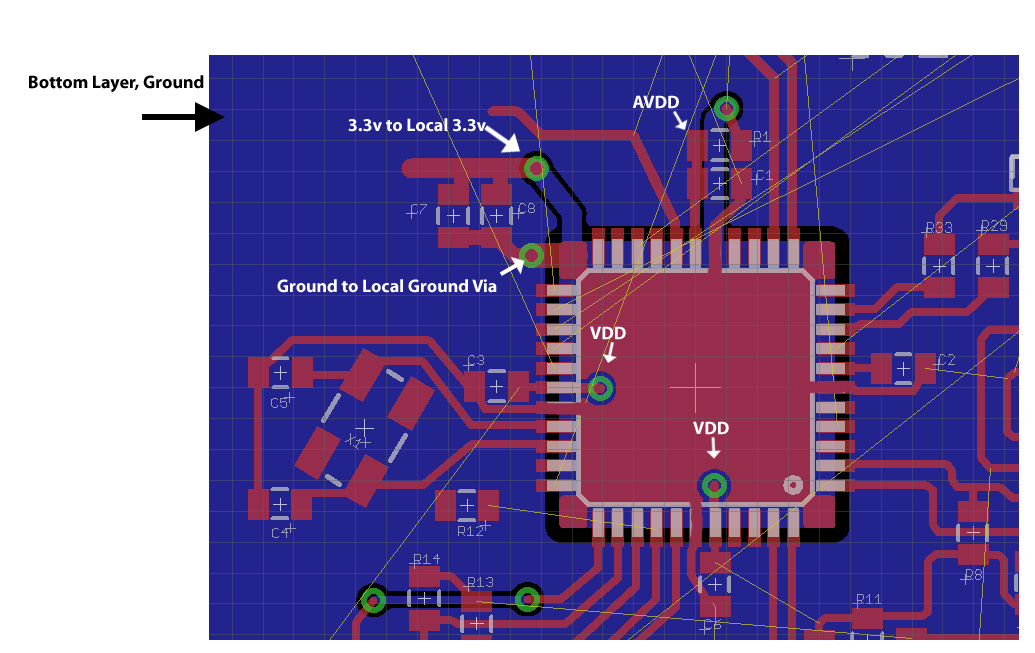 Here are the guidelines that I've tried to follow so far.

After doing the above, I have a few questions.

At 16MHz matched length traces will not provide any benefit. They key however is to ensure that your GND return paths are short and that the crystal lines are isolated from clocking sensitive traces such as Uart RX or Reset lines, or any other functional traces to which coupled clocking could cause false interrupts or undesired functionality. To the Grounding, I would suggest placing some vias close to the GND paths of the load capacitors rather than relying on the GND trace back to the MCU. I generally place a 0.2/0.4mm via near every signal component ground pad where possible and at least 3 0.4/0.8mm vias for power or transient prone components. The general rule for noise/high speed is to keep your ground impedance as low as possible.

Your layout doesn't indicate whether the polygon pour on the bottom layer is ground, but in the event it is then I would suggest stitching it with some GND vias and applying a polygon GND fill on the top layer once your layout is complete. Try to stitch around any high speed or noise sensitive lines with GND vias.

Also, be mindful of trace-pad exits which are not at 90*. Acute angles between pads and traces will result in "acid traps" during the etching process and in the case of hand etched PCBs, may not etch correctly.

Also consider the local plane for VDD. Larger copper areas will be more susceptible to noise than wide traces with close grounding. I generally prefer to place such power fill on internal layers between GND planes for BGA escape. If your top layer is to be GND filled than this won't be a problem provided it is well decoupled.

Not the answer you're looking for? Browse other questions tagged pcb layout crystal decoupling-capacitor or ask your own question.