How to drive 400W of High-Powered LED's in parallel / series?

I want to create a luminaire (a lighting unit) comprised of the following:

I have included two schematics, the first separating the luminaire into 6 circuits: 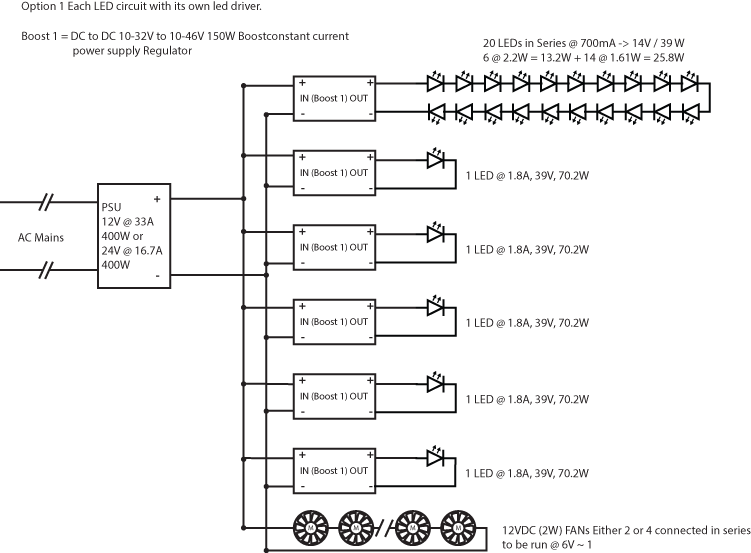 The second circuit groups the 20 Crees with 1 Nichia, and then 2 Nichias per circuit. 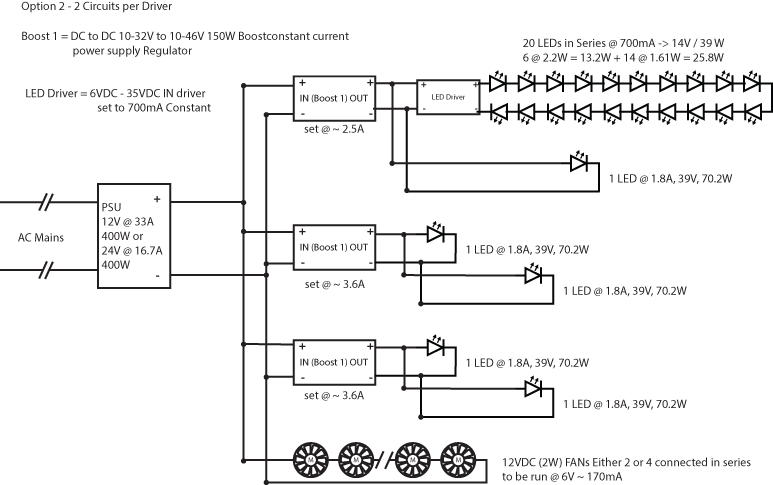 I want to drive the circuits using a DC to DC 10-32V to 10-46V 150W Boost constant current power supply Regulator like the one found here:

My questions are these:

Finally, does anyone have any idea how to maybe run this rig more efficient? I mean, how can I create this same light with only 2 circuits?

There are many drivers. Not so many that will power 20 in a string. Many you can expand the voltage to what ever by using an extra MOSFET.

You will need massive thermal management to run them at 700mA.

20 is pushing it. I went with 16 max but that is for all colors. 20 Red would squeak by. To be compliant with Electrical Saftey I keep voltages at 48 max.

You approach depends on how any you are going to make. Is it a 1-2 or are you going into production?

Running LEDs in parallel is not acceptable to me. There are those that can argue that point but they would be wrong. Been there done that. It will work only if the LEDs are running at ambient temperatures which is not the case here.

I just got in a TI Eval Board for the LM3466 load balancing circuit. It appears to be the way to go with parallel strings when the current is constant and they are not dimmed.

You can build a very efficient DC-DC driver for $2-3.

I would power your circuit with more than 12V for efficiency and cost. A boost driver will cost more than a buck step down driver and be a little less efficient unless you spend more.

I'm not a big fan of COB arrays. Too much heat in too small an area. You will need very good thermal management to pump them at 70 Watts. Chilled liquid cooling would do it.

If you are just making one or two use constant current poser supplies. The Meanwell HLG series would do very well here. One supply for each string unless you use a load balancer for multiple strings. 40 @ $30, 100W @ $47.

Not the answer you're looking for? Browse other questions tagged led driver constant-current or ask your own question.