In my A level physics I recently did an experiment to find what the optimum frequency to send a digital signal through a RG58/U Coaxial Cable is. My results are available on Dropbox. What I found was the noise ratio oscillated. There also appears to be a slight bell curve, with more noise in the middle frequencies than the outer frequencies.

I initially thought this may be due to standing waves, however my maths disproved this (might still be a valid theory though). We have some physicists in the Science department, but it'd be nice to hear some ideas from Electrical Engineers.

Any and all ideas welcome. It might be worth noting that I was conducting this experiment in KHz when coaxial cables usually work at much higher frequencies, does this make a difference?

What is causing the oscillation pattern?

I did take a look at results of your research, but unfortunately, I don't have time at the moment to fully digest them, so I'll post a few I hope helpful notes about that you're doing.

First, for this demonstration, I'm using Owon SDS7102, which is a younger, more capable (1 gigasample per second, 100 MHz bandwidth) brother of he scope you're using.

First, a bit about the settings I'm using here: Under channel one settings, I've set the probe attenuation to be 1X since I'm not using a probe at all, meaning that there's no attenuation. Looking at your results, I thing that it would be very wise to check your probe settings and your signal generator settings, because the results look a bit unrealistic to me. Noise of 4 V is a bit too big even if the voltage of the signal is 86 V. Did you check the actual voltage levels with a multimeter? Could it be that your scope might be set in 10X mode when it should be in 1X mode?

Next, my bandwidth limit is off. Under acquire settings, I've set the acquire mode to peak detect. What this does is take a loom at all the samples of the ADC and show those which have greatest values. This is important if the sample rate is to be set below the highest sample rate, since it gives the most information about noise peaks. Record length is set to one megasample, meaning it will memorize 1 000 000 samples after each trigger. I don't think that your scope will have all this settings, but it may be a good idea to document them, just in case something strange is going on here.

As for the images here's a shot of its input without anything attached: 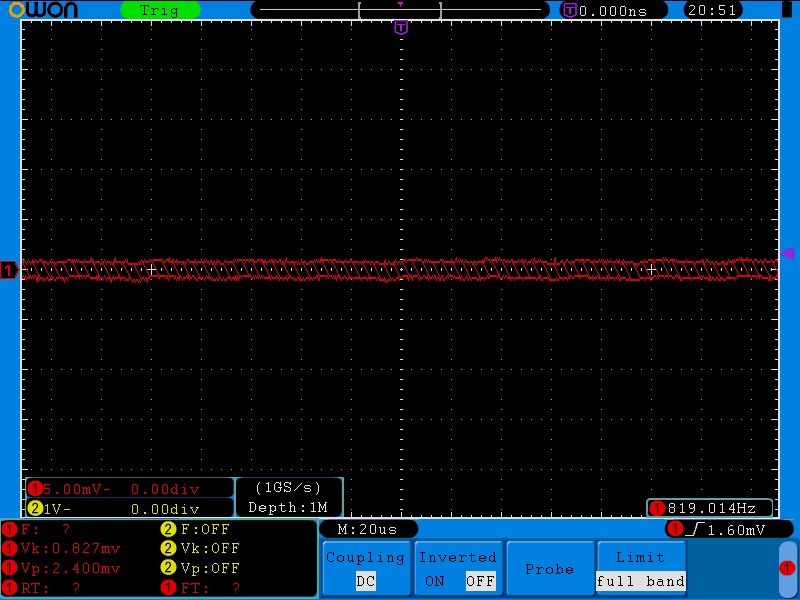 Next, I'll just connect a 50 ohm BNC cable to the scope and post following picture: 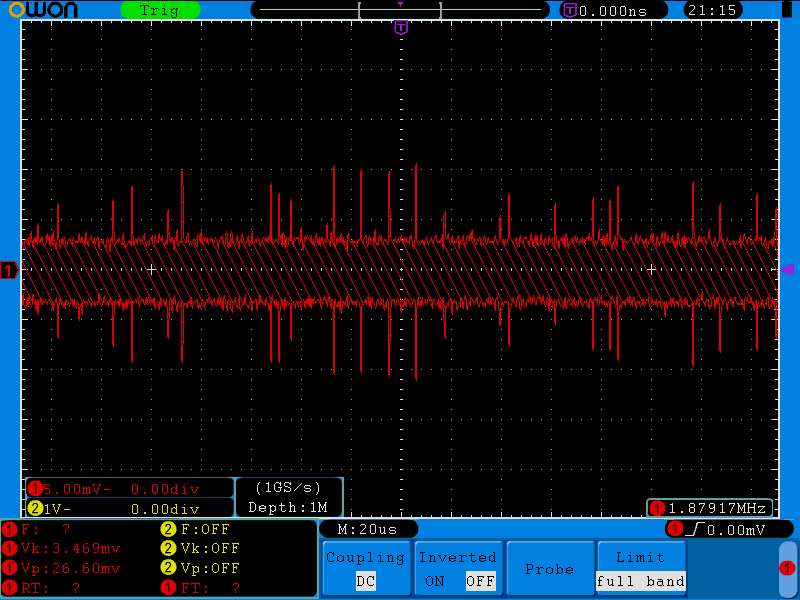 Here we can see that the peak to peak value of noise increased more than 10 times by just connecting the cable with nothing attached at either end. Do note that some of the noise comes from signals getting reflected inside the cable itself. 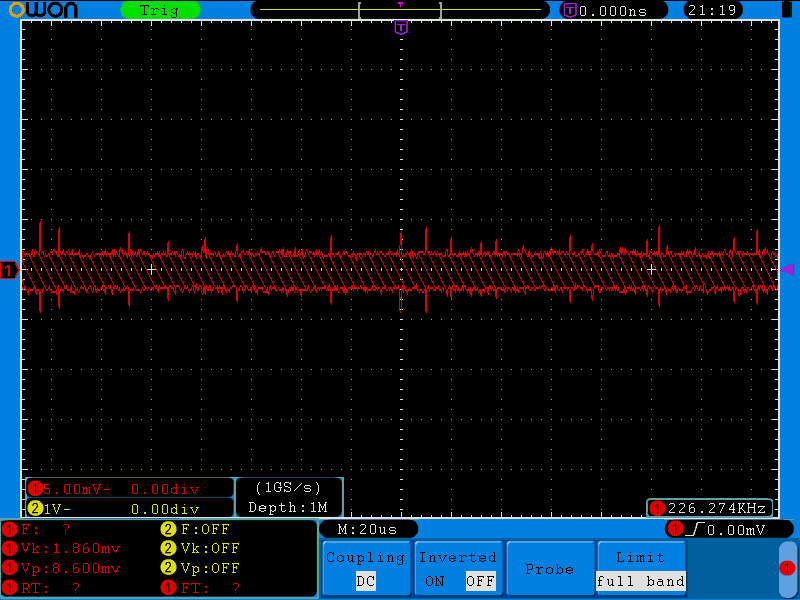 As you can see, the peak to peak value of the noise here decreased to 8.6 mV. One more thing that needs to be taken into account is that the terminators physically close ends of the cable, so that the inner conductor is shielded inside of a Faraday cage, so it's a bit harder for stray signals to get into contact with the cable.

Next, there's the issue of grounding. One thing that can in some cases upset measurements and sometimes causes problems, especially in audio setups, are ground loops. I'm not sure if that's the case here, but it may be worth looking into in any case.

Unfortunately, the PDS manual doesn't have a handy grounding diagram, so I'll show diagram from SDS manual. Internally, both series work the same. 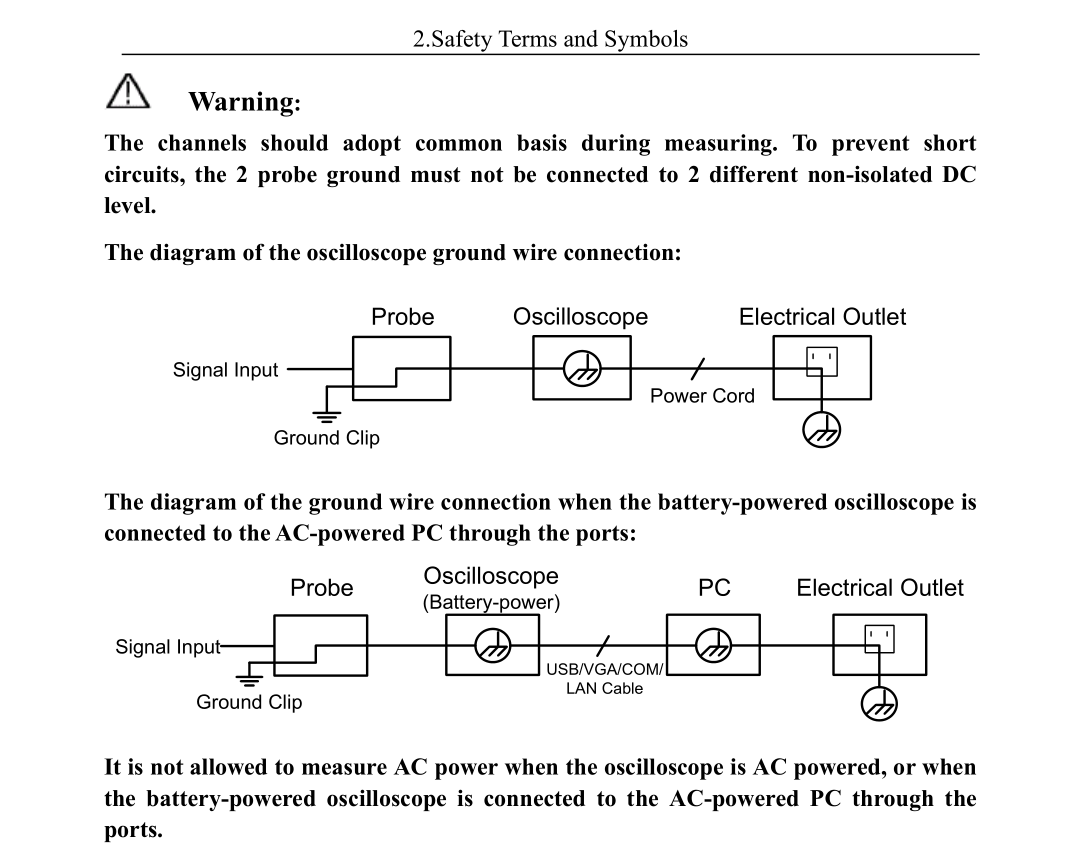 What's basically shown here is that the ground connection on the power cord of the oscilloscope is connected to the ground clip of the probe. That connection goes through the outer conductor of the BNC receptacle. If the negative lead of the signal generator is also grounded, you might have current going through the BNC shield due to possibility of slight differences in ground potential. I've had this happen to me even with all devices directly connected to same power strip. Once again, I'm not sure if that's the case here or not.

Another problem which I can think of now is related to noise pickup in the non-coaxial part of the cable. Singe the signal conductor isn't shielded, it's going to pick up noise, but I think that you calibrated that out with the no-cable measurement.

There could be some other reasons as well, but this is all I can think of at the moment.

Not the answer you're looking for? Browse other questions tagged noise frequency cables or ask your own question.

0
What might be the cause of noise in my audio out on Stereo when connecting computer as the “audio in”?
6
How good is coaxial cable?
6
Coaxial cable, resistor and oscilloscope
7
Industry standard measure for coaxial cable stiffness?
5
Coaxial cable vs shielded pair
8
How does a coaxial aerial cable work?
2
Non-coaxial 50 ohm cable for LVDS
4
75 Ohm Coaxial Cable Used On a 600 Ohm Output