I need some help. This can be a dumb question as I am not an electrical engineer nor an electronics engineer, but need to solve a problem as given below. I tried to solve it but not sure if it is true because spice simulations give different result.

Where is my mistake? 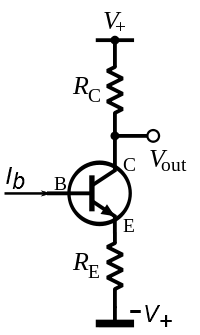 7 years late, but this was a fun one to do some forensic math on! And it actually may be a bit of a trick question! The trick comes down to that you're given an input current \$I_B\$, not an input voltage.

That means that it doesn't matter what \$R_E\$ is, the current will just be \$101\times I_B\$. We can explore this a little bit more thinking about Ebers Moll 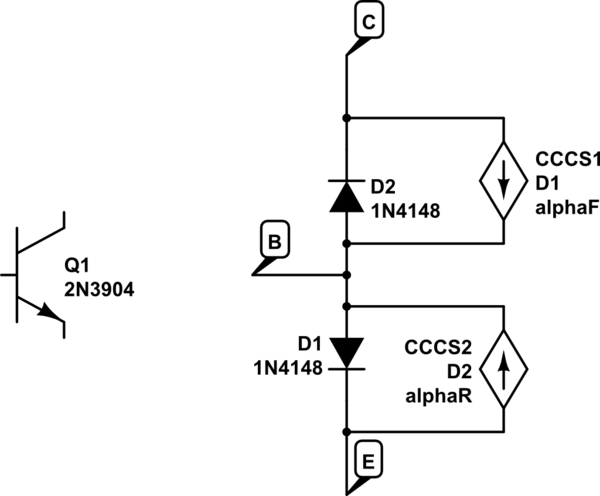 Let's say we start off with \$I_B=0\$. At this point CE is positive, reverse biasing D2 - so no current flows anywhere. This is in cutoff. It doesn't matter what \$R_E\$ is in this case either.

That means that at some point \$I_B\$ gets large enough that the \$V_{BC}\$ becomes positive, and our diode D1 becomes forward biased. We are now in saturation mode. At that point, no matter how much we increase IB, \$I_C\approx I_E\$. \$\beta\$ is effectively reduced, but it's still basically \$I_E=(\beta_{reduced}+1)I_B\$.

So it's not exactly a trick question, but it's a question about controlling a BJT with current instead of voltage.

and this is correct, but this implies

In my opinion, the Kirchhoff laws for the ouput circuit are wrong, and this is transferred to the rest of the developing.

Not the answer you're looking for? Browse other questions tagged bjt circuit-analysis or ask your own question.

5
Designing yet another BJT amplifier given some constraints
4
Av for small signal analysis with BJT for unbypassed emitter and ro in place
8
Stability factors of a voltage divider bias circuit
5
BJT Voltage Divider Bias Circuit problem
2
Voltage divider bias (BJT) leads to a huge voltage drop across the collector resistor. Why?
5
How to derive the precise gain of an NPN common emitter amplifier without emitter degeneration?
0
Finding current through an LED in an amplifier using a BJT
0
Apparent contradiction in AC analysis of BJT amplifier
0
How to find Base, Emitter, and Collector Voltage of a Circuit Demonstrating Miller Effect