What makes automotive alternators so inneficient relative to other applications?

Automotive and some marine alternators typically have an efficiency curve with a peak of 60%. 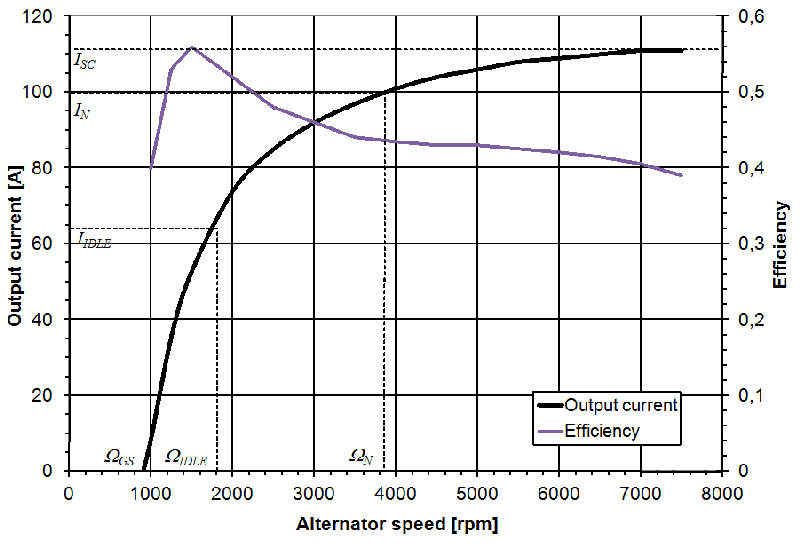 Whereas alternators to other types of applications reach 96% of efficiency (excited rotor type).

What are the factors that makes then so inefficient compared to other applications? Is pole-number, air-gap? Could the efficiency be improved with some modifications for stationary use or the unique way is maintain the speed at the peak of efficiency?

@olinlathrop suggested somethings, among that the environment the alternator works (temperature, vibrations, dust) means their robustness can be a trade off to the efficiency.

I agree in some points, although there's no objective answer, good sealed bearings would not decrease the efficiency that much, so I think temperature can be one of the factors as they are small and works near a combustion motor, even trough have their own forced ventilation.

Anyway where is an alternator with stated 80% efficiency at 450A 24A! That's ~10Kw. http://www.emp-corp.com/media/MarketingMaterial/Power450/SpecificationSheets/Power450.pdf

The difference is that this alternator uses magnetics instead of electro-magnets in the rotor. Anyway, the ~95% efficiency alternator product sheet I read is a excited rotor one.

I don't design automobile alternators, so I can't say exactly what goes into the engineering decisions. However, here are some reasonable speculations.

Alternator efficiency is simply not a big deal in a car. The power the engine has to put out to move the car dwarfs what the alternator requires. If this tiny fraction of overall motor power were 1/3 less it wouldn't make much of a difference. Therefore efficiency can be traded away to get other more important parameters. Some of those probably include high reliability in a harsh environment, operation over a wide temperature range, and keep going while being splashed with water containing dirt and road salt and other crud. The volumes are very high, so keeping cost down must also be a major desire.

First, look at the cost of a 90% effecient generator of the same power compared to a car alternator. I expect it will be several times more. Then try operating the high-efficiency generator in a harsh environment like under the hood of a car and see how long it survives. Car alternators routinely survive this for 10-15 years. The high end efficient generator that cost several times more probably won't last a month in bad conditions.

It's all about what's really important and making the appropriate engineering tradeoffs in the design.

Voltage: at 14v it is very hard to be efficient.

I think we could get a far better efficiency just by operating the same alternator at a higher voltage.

Automotive alternators are inefficient because they're using a 50 year old passive overload protection design. You can put unlimited load on a generator with the field current at maximum and as long as the Voltage does not fall below 12 Volts it won't be damaged by overheating, at least not right away. There is a huge amount of stray inductance in the windings. At idle, it may be putting out 16 Volts AC but internally (if measured with no load) it would be putting out 28 Volts. At high RPM with 100 Amp load at 16 AC Volts produced, internally the alternator may be putting out over 100 Volts, if you were to measure it with no load. As the RPM increases, the stray inductance becomes more effective at reducing the output current.

The stator is very lossy too. If you apply full field Voltage to an alternator you can even feel the resistance if you try to turn it with your hand without any load. That's all from the magnetic field being lost to the stater. Electrical current is being inducted in to the stator and it is generating heat. A huge amount of air flow created by the alternator turning at thousands of RPM keeps this heat under control. Some people install an alternator disable switch that activates at full throttle to not waste that extra horsepower.

Then the rectifier will drop about 2 Volts at higher loads. 16 Volts going down to 14 Volts is 12.5% loss in addition to everything else.

If you can get a whole lot more power out of an alternator that is turning at high RPMs by letting it put out a higher Voltage. Doing this would also make it much more efficient. The rectifier diodes are TVS diodes though so they'll keep the output under 40 Volts and they'll destroy themselves in the process if need be. Without TVS diodes, if the alternator was operating at high RPM and full load, and the load was suddenly disconnected, the output could spike to over 100 Volts before the regulator readjusts. So you'll have to replace the rectifier with a regular 3 phase rectifier and provide a way of handling surges. Then manually control the field current. Letting the output go from 14 Volts to 28 Volts with the alternator internally producing 150 Volts would nearly double the output power and efficiency.

Instead of passive overload protection they could make a more efficient stator and just have a current sense on the output to make the regulator back off to protect it from overloads.

I believe that a good part of the low efficiency can be attributed to the fact that the individual coils don't charge the battery until their voltage exceeds the battery voltage + 2 diode drops. If the peak coil voltage is 16V, and the battery voltage is 12.6V, then no current flows from a coil until the AC waveform of that coil exceeds about 14.6V (12.6V + 1V + 1V). So each winding produces no current at all until its voltage is above 14.6. While it is true there are 3 phases, which greatly reduces the battery ripple current, that doesn't change the fact that each individual coil doesn't produce any current at all for the majority of each cycle. Such a low utilization of the coil would have to have a negative impact on the overall efficiency.

That is unless an alternator is a constant-current source and not a constant-voltage source...

Car alternators are way better than DC generators because they are more effective and produce enough electricity to power everyrhing you need at all rpm ranges. The trouble is that they as you find out of name produce AC while everything in your car needs DC. So on entry you loose some efficiency. The current must be also stabilized - next loos. Inspite of all loses they are still better than DC generators that barelly can power headlights of a car. And when something works well why to fix it?

Not the answer you're looking for? Browse other questions tagged generator efficiency or ask your own question.

0
What makes an arbitrary waveform generator arbitrary?
1
What makes the generator practical?
0
What stabilizes the alternators/generators?
3
To what extent are alternators “flexible” to variations in input speed and output voltage?