How does the tester screwdriver work?

for the impedance, so if C is high enough, the impedance should be close to r , the "effective resistance" of the formed circuit. Here I get lost; why r is small enough to cause a current in the range of mA even if I stand on an isolating surface?

So really what I am asking is how one may represent the system hot wire - screwdriver - human body - wooden floor - building - ground as an electrical circuit, and which parts of the physical system contribute to the resistance, capacitance (and inductance?) and in which proportion, even very approximately.

how one may represent the system hot wire - screwdriver - human body - wooden floor - building - ground as an electrical circuit,

I've long assumed it to be something like this: 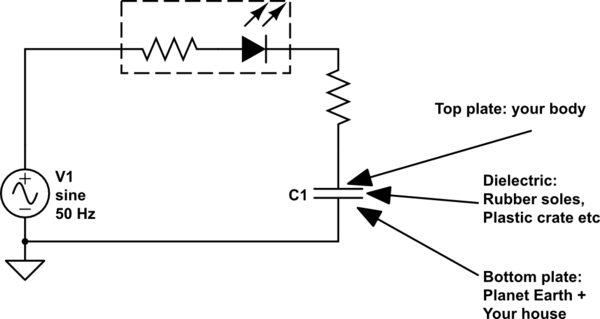 The resistor in series with the neon is usually the component that limits the current. It will vary between devices but, about 0.5mA appears to be the limiting current (for NE-2 bulbs) and, given that the neon itself will "strike" at about 150V (peak), the resistor will be limiting current to about 0.5mA with a voltage across it of about 150V - this is for a 220VAC circuit. This implies a resistance of about 300k ohms.

However, I suspect that neons used inside screwdrivers are going to work on 110VAC and they are possibly 60V types. This means that the volt drop in the resistor will be about 250V (peak) on a 220VAC supply, implying a resistance of about 500k ohms. But this does not take into account human body capacitance in series (see further below).

A low-cost type of test lamp that only contacts one side of the circuit under test, and relies on stray capacitance and current passing through the user's body to complete the circuit. The device may have the form of a screwdriver. The tip of the tester is touched to the conductor being tested (for instance, it can be used on a wire in a switch, or inserted into a hole of an electric socket). A neon lamp takes very little current to light, and thus can use the user's body capacitance to earth ground to complete the circuit.

Link: Here - scroll down to the heading "One-contact neon test lights" is reached

There are resistors in series with the neon inside the screwdriver body but the normal impedance is largely capacitive with the resistors present there as a safety device should the neon become directly connected between live and neutral/earth: - 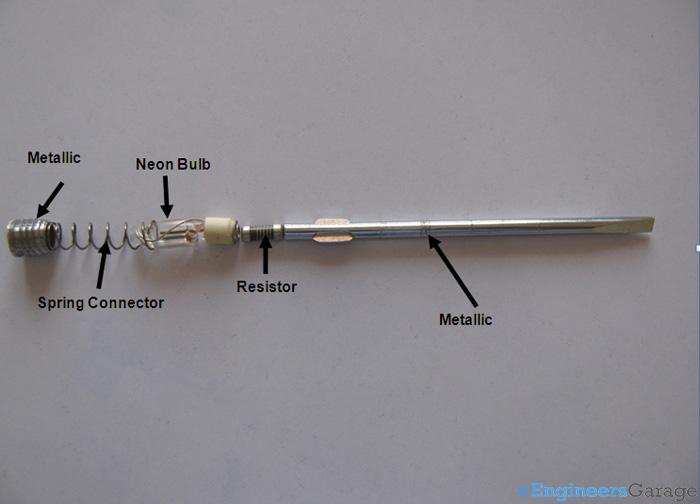 How much capacitance does the human body typically offer at the end of the screwdriver? The Human Body Model for capacitance, as defined by the Electrostatic Discharge Association (ESDA) is a 100pF capacitor in series with a 1.5kΩ resistor (source)

100pF at 50Hz is an impedance of about 30M ohms and dwarfs the resistance in the screwdriver. If one takes for granted that the ESDA model is about right, clearly, the current through the neon is virtually totally defined by this model.

The matter is more related to human body chemistry.

The said tester is used for AC and less than 0.5mA. Human body ions absorb this little charge in one half cycle (say -ve) and then release it in the other half cycle (+ve) causing the neon bulb to glow a little.

If a person even 1 meter above in the air the tester will work, but in this case the current will be much less than 0.5mA and the neon glow will be very low.

This may sound ridiculous but have you tried doing the same tests at different levels above the ground? I mean like testing on the bottom floor of a building and the second floor of a building? I am fairly certain that there will be different results based on the two positions based on distance to the earth. The reasoning behind this is based on some theory that I have done considerable research on and is linked to the great inventor Nikola Tesla. He, basically putting it, used this same idea but in reverse with much larger voltages and frequencies for the mains supply. Instead of 50Hz he would use 50MHz!!! This would seem pointless to most but that is because most do not recognise the effects that these higher hertz levels have on the circuit as a whole. As for the difference in height above the ground this, basically again, is to do with capacitor values. The larger the distance the smaller the capacitor level. Using F=1/(2(Pi)RC) the lower C value and approximately same resistance will mean a larger frequency is needed. The mains voltage having only a frequency of 50Hz will probably not be high enough to work with this bigger gap from the earth. To put it another way the test you did when you had shoes on and shoes not on is just a smaller version of this. Shoes on is a capacitor similar to testing on the second floor and shoes off is testing on the ground level. Unless I am mistaken the shoes off would have had a much brighter neon output than the shoes on as shoes on means lower capacitor and the frequency of the mains can not cope with this. Why am I bothering to say this? If you have the time you may wish to test with frequency generators and your mains testing screwdriver. I am certain that the higher frequency output on the tester will result in brighter bulbs on the same height level and that if you were to try at two different heights that a much higher frequency is needed to produce the same lux level as on the ground level compared to the second floor. This is the very simple law of "wireless energy transmutation." The higher frequencies are necessary to conduct over greater distances due to the capacitor effect given that everything has capacitance and resistance. This is why scientist are apparently struggling with wireless energy transmission as they use mains voltage at 50Hz and not mains voltage at 50MHz. 50MHz could travel almost the whole width of the planet never mind a few meters which is the current best!!!

I hope that this helped and that it somewhat makes more sense... I would very much appreciate if you would not go around spreading this theory to many people and that you only use it yourself. The reason being that people will not care what you think as they are stuck in their ways and that those who do care already know this and will have you "silenced" to keep it that way with only them knowing.

Not the answer you're looking for? Browse other questions tagged electromagnetism circuit-analysis dielectric or ask your own question.

0
Electrical circuitry
0
Are unearthed metal cases actually unsafe?
0
Will a man get electrocuted if he places the electrical test screwdriver on his foot?
0
Will a live wire tester screwdriver work if I am hanging in air?
2
A question about the current value in a mains tester
1
why does current flow from (+) psu A to (-) psu B?
0
insulated wire giving shock