What is the simplest way to toggle a relay with analog feedback?

I've been playing with electronics for a long time, but am fairly new to digital electronics, including using Fritzing, so apologizes in advance for that.

I'm attempting a fairly basic 5VDC circuit where I want to use a thermistor to toggle a fan on and off, and to be able to set the point at which the fan toggles.

I know I could use Arduino to read the resistance from the thermistor and the potentiometer and, based on logic, supply high or low to the relay switch - but how would I build the circuit without an Arduino? Would I still need to use an IC for the logic?

I was thinking I could potentially use something like an AND/OR gate with the feedback from the thermistor circuit to control the relay ( thus giving the relay either high/low and not a variable voltage ) but the of course the AND/OR gate is going to get the variable voltage which seems wrong to me ( analog feedback to a digital component ) and so I know I'm missing something - a small I/C that can read the analog voltage would seem to be the "right" thing but it also seems like there may be an easier way to do it with such a simple circuit.

Below are the Schematic and Breadboard views from Fritzing. I know they are incomplete, and that the power supply is 6v instead of 5v, but hopefully it will help convey the basic idea.

I think you should consider using an analogue component known as a comparator. It would compare the signal from your thermistor with a set-point set by a potentiometer and tthen output high or low depending on which is higher.

Wiki is quite useful on this and worth a read. You can also make a comparator from an op-amp and realistically this will work just as well for your application. 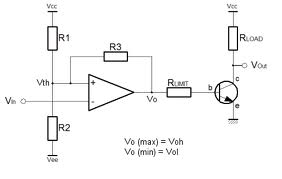 Vin is compared against Vth. Vth is set by R1 and R2 with a slight influence from R3. In your application, R1 and R2 would be a potentiometer, maybe 10k and R3 would be typically 1Mohm. R3 provides hysterisis that guarantees a certain level of protection against the comparator output "chattering" when Vin nearly equals Vth.

Rload in the circuit can be your relay coil.

Not the answer you're looking for? Browse other questions tagged digital-logic analog integrated-circuit relay thermistor or ask your own question.

1
How much Analog would a Beginner Electronics person need to know?
2
Digital Circuit with Toggle Switch using Logisim
5
Problem Switching Relay with Transistor from Microcontroller
0
Help with using S26MD02 Relay as a Switch
4
Using mosfets to switch between two thermistors
1
Categorizing ICs as digital or analog
1
Basics: Raspberry Pi Zero w with relay. Relay trips without input
0
Replacing a diode-OR gate by a circuit that behaves the same way (also in the presence of feedback loops) without accumulating voltage loss
0
Relay arcing protection for analog input