For a balanced (differential) connection, the return path is "the other wire" in the differential pair. Despite the complete circuit, it is recommended to connect a ground wire as well. This is to assure that the difference between Ground A and Ground B is always within the common-mode range of the receiver.

However, in other places, it is mentioned that even for a balanced (differential) connection, connecting the ground wire could cause a problem. For such cases, it is recommended to use some sort of ground-lift adapter along the path of the ground wire to eliminate the "ground loop". If that is the case, then why do we even need the ground wire for a differential pair in the first place?

Even if there is a potential difference between Unit A and Unit B, connecting the ground wire will still create a ground loop, which will cause noise (hum), rather than solving the common mode range of the receiver!

How does connecting the ground wire work? When do we use it, and when do we avoid using it for a differential pair?

grounding differential groundloops
Share
Improve this question
edited May 7 at 8:32

There are several ways to send a signal from one place to another over wires. There is no one best method for all cases. Everything is a trade-off.

Voltages are always relative within a circuit, so to send any signal by wire inherently requires [at least] two wires. Often we talk about a "single-wire" signal or a "single-ended" signal because the second wire is implied to be ground.

When both the sending and receiving circuits have the same ground, the simplest scheme is to use one wire for the signal. Sometimes "having the same ground" requires using additional wire(s) in the cable to explicitly "send" that ground. Other times, when there is already a good ground connection, a single conductor may do the entire job. This is by far the most common case. Most signals within a PC board don't need individual ground connections. All components on the PCB are connected to the same common ground, often a whole plane of copper. When the ground connection between the sending and receiving circuits is good, as is the case when both are connected to a common ground plane on the same PCB, it is usually not necessary to do anything more.

When the sender and receiver are further apart but are still connected to the same ground, the difference in ground potential between the two can be significant. For example, two units plugged into outlets at opposite sides of a house can easily have a few-hundred mV ground offset between them. All it takes, for example, is 200 mA flowing through a 1/2 ohm ground wire to make 100 mV ground offset from one end to the other.

A far-smaller ground offset could cause problems, depending on the noise floor level of the signal. If, for example, the signal is 1 V audio with a 90 dB signal-to-noise ratio, then the noise floor is only about 30 µV. That level of ground offset can happen very easily. For example, it only takes 30 µA of current across a 1 Ω ground connection to cause that much offset, mixing an annoying hum or buzz into the audio signal.

Where very small ground offsets can cause problems (as in the example above), signals are often sent differentially. This means the signal is "encoded" as the voltage difference between two driven wires. To "decode" the signal, the receiver subtracts the two voltages. The advantage of this is that the noise on the ground appears the same on each signal, so it gets nulled out by the subtraction. Put another way, the ground offset and any noise picked up identically by both wires along the way becomes a common-mode signal, which the subtraction rejects.

In this case, having a ground connection reduces the stress on the subtraction circuit. An active subtraction circuit only works if the signals are within a certain range, called its common-mode range. Also, any active difference circuit won't be perfect. Some amount of the common-mode noise will make it into the eventual single-ended signal coming out of the differential amplifier. We can't just throw any arbitrary common-mode voltage at it, since it won't work, and some of the noise will get through anyway.

In many cases, both ends have ground potentials that are ideally "the same", except that some small difference is inevitable. In that case it also makes sense to connect the grounds, which means a three-wire connection. The "extra" ground conductor can be a shield surrounding the other conductors in the cable, which blocks electric fields in the environment from capacitively coupling into the signal wires inside.

There is also the issue of a ground loop. A ground loop is when there is more than one path for ground currents to flow. The reason this can be bad is because where the ground currents flow, and thereby where they cause a ground offset, is now unpredictable. Other unrelated equipment connected to the same ground network can have its power leakage currents flowing through your equipment, for example.

In the case of a two "boxes" passing a 1 V audio signal between them, this is sometimes solved by connecting one or both boxes weakly to its local ground, while connecting both solidly to the ground in the cable between them. For example, each might have a 1 kΩ resistor from its ground network to the ground connection in the AC power outlet. Audio devices are built with isolated power supplies, so they work just fine even if their chassis are allowed to "float" arbitrarily hundreds of volts with respect to ground. However, that's not good for anything else around. You don't want your amplifier picking up random static charges and being 2000 V from ground. The 1 kΩ resistor to ground bleeds off any static charges, and the unit's ground will be within a volt or two at most of the wall outlet ground. When it is connected to another device that has a similar ground connection, no substantial ground loop is formed because very little current will flow through the 1 kΩ resistors in each device. Both will be solidly tied together via the ground wire in the audio cable, and that voltage won't be far from the wall outlet ground due to the two "bleeder" resistors to ground.

In some cases where very little can be assumed about the ground voltages at either end (such that they cannot be connected together), galvanic isolation is required. Common ways to send a signal with galvanic isolation use only two wires, with the addition of an optocoupler or a signal transformers. Available optocouplers and signal transformers easily withstand hundreds or thousands of volts of common-mode offset, depending on the properties of their insulating material. Common 10 and 100 Mbit/s Ethernet using RJ-45 connectors are a great example of transformer coupling. The signal is a differential current in a twisted pair of wires. Each end is transformer isolated, and is allowed to be something like 1000 Volts (I don't remember the exact spec) off from the other end. One disadvantage of transformer coupling is that DC is lost. In the case of digital signaling such as Ethernet, the bits are encoded in a certain way to always contain a minimum frequency. Anything below that frequency can be discarded by the isolation scheme without damage to the signal.

The issue with sending a ground along with a balanced signal pair is that it's likely to introduce a ground loop. This is an arrangement where one particular piece of equipment or one circuit has two or more paths to ground. When these paths are significantly different, then it makes a loop, and this loop is essentially a single turn transformer that is pretty good at picking up stray magnetic fields (like those from mains wiring) and turning those into noise currents. 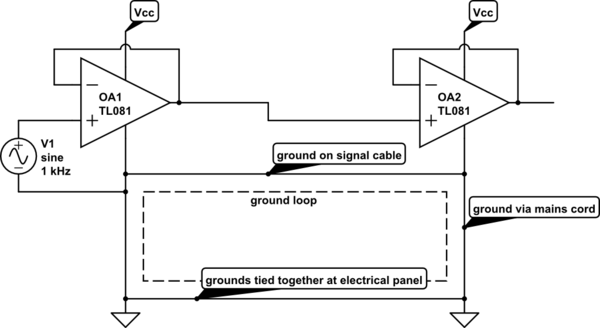 Any magnetic flux through the loop causes current in that loop by electromagnetic induction, and since the ground connection between the equipments has some resistance, these induced currents result in some voltage difference between the grounds. If the ground is a reference for the signal, then these differences in ground potentials are indistinguishable from the signal, and noise is the result.

Balanced signalling, ideally implemented, eliminates this problem. The reason is that with a balanced connection, the signal isn't referenced to ground, but rather is the difference between two halves of the balanced connection. You still have a ground loop, and associated noise currents and voltages, but they are irrelevant to the signal.

Preserving the ground allows the entire system to be fully enclosed in a shield. By the entire system, I mean the enclosures of both devices as well as the cables between them. This improves RF shielding by acting as a Faraday cage. Without the shield around the cable, RF noise can be picked up or radiated by the cable.

Preserving the ground also ensures the signal is within the common-mode capabilities of the receiver. This concern can be mitigated with transformer coupling, which has a very huge common-mode input range, but since transformers are relatively expensive, this isn't always an option.

The issue is that a lot of equipment sucks. Especially when we are talking about balanced audio, getting it wrong seems to be the norm. Though it's certainly possible to keep ground currents away from the signal, thus keeping them irrelevant as they should be in balanced signalling, this requires careful attention to circuit layout. It's also essential to maintain equal impedances on the balanced pair. A surprising number of ostensibly "professional" audio equipment fails on one or both of these counts.

It only takes one bad device in the chain to inject unacceptable hum into the audio. Since breaking the ground on the signal cable or chopping the ground pin off a mains cord is easier than re-engineering audio equipment, breaking ground loops with various ground lift devices is common practice.

Not the answer you're looking for? Browse other questions tagged grounding differential groundloops or ask your own question.

6
How to avoid a ground loop between pcbs
8
Ground connection in differential signals
12
Is a ground/common needed for proper CAN bus communication?
1
Single supply differential balanced preamp
17
RS485 network ground pin - when to connect?
0
Reduced gain with ground loop isolation with car aux head unit
3
Use of virtual ground to split ground loops?
0
SMPS chassis ground and earth ground
1
Shield grounding location for an STP cable in a balanced system