What type of antenna does the Xbox One controller use and how can you disable it?

I recently cracked open an Xbox One controller, the impetus for doing so was two-fold:

I was able to successfully mod my controller to utilize the Xbox One's PCB and now my attention is aimed at electrically disabling the wireless functionality. The reason this is necessary is that wireless communication is forbidden in fighting game tournaments due to the possibility of your controller affecting the inputs of your opponent (or vice versa.)

It's been a loooong time since I studied RF but I'm fairly certain that the antenna circled in blue in the picture below is an Inverted-F Antenna (IFA), is this correct?

I had thought that physically de-soldering the antenna would prevent the controller from wirelessly connecting, but I was wrong! It still connected at a distance of about 6-8 ft.

Next I thought that cutting the trace on the bottom side of the board leading to the antenna (shown in red) would surely do the trick but again I was wrong; it would still connect if I was within a foot or two of the Xbox One. As an aside, what exactly is that trace's functionality? Continuity tests shows to be at ground potential (this board has a common ground). Originally I thought this was the feed line but now I'm thinking this is the shorting trace which acts like a parallel inductor. Any ideas?

So what kind of voodoo is going on here, I had thought that to get a device to properly radiate in a functional manner requires all the right parts in all the right places. This board, however, seems to be built like the terminator; it just keeps working. Besides putting it into a Faraday cage, can anybody offer up suggestions on how to electrically disable this PCB from radiating?

As a side note, I'm not 100% sure what frequency band the Xbox One controller uses but if I had to guess it would be 2.4Ghz as that is what its 360 predecessor used.

Here is zoomed in picture of the trace that I cut. I followed the trace with blue dots so you can see how it connects to the antenna on the other side of the board. The trace appears to have an SMA connector as well as AC-coupling cap in series. 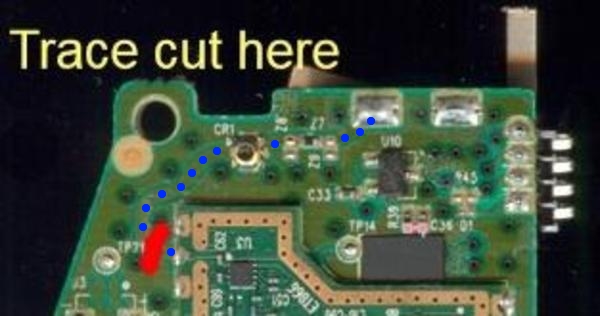 Next I thought that cutting the trace on the bottom side of the board leading to the antenna (shown in red) would surely do the trick but again I was wrong; it would still connect if I was within a foot or two of the Xbox One. As an aside, what exactly is that trace's functionality?

The red line you cut IS the antenna path. But not it's radiation source. The reason it now only connects at 1 foot instead of its usual range is because you crippled it. Two ways to completely (for practical purposes) remove the signal is depower the entire antenna/wifi section, which the sub-board is, or connect the antenna trace to ground.

For theory, Antennas should be a full or 3/4th or 1/2, or 1/4th of the wavelength for optimum propagation. Just because it is not that size does not stop it from working, it just stops it from working well. Your antenna is now a few millimeters long instead of a few inches.

Yes, you are correct, it is a variant of an inverted F antenna. The RF is in fact radiating from the short trace. At 2.4 GHz the free space wavelength is about 13 cm. In FR4 material used in PCBs it is about 1/2 of the free space one. So, even a short trace will radiate enough for a very short range.

According to Friis equation, the receive power goes down as a square of the distance between two antennas. So, if with a good IF antenna (gain about 0 dBi) your range is about 50 feet, to get the same receive power at a range of 1 foot your antenna can be 2500 times worse (or have a gain of about -34 dBi). It is quite possible that a short trace would have a gain of ~-30 dBi.

I think the best way to disable WiFi is to find a radio/WiFi chip and unsolder either the VDD or TR pins. TR pin is easier to find since it is soldered to the RF trace.

Not the answer you're looking for? Browse other questions tagged pcb rf pcb-design wireless antenna or ask your own question.

10
Which antenna to use if close proximity to metal objects is unavoidable?
2
Help with the design of a rectangular loop antenna for the PN532 controller for NFC communication
6
Cheap 2.4GHz Antenna Tuning
0
designing trace anthtenas for 2 sets of rf rx+ tx
0
Disable a wireless module RF
0
How to design a feed line for a single wire antenna
3
Is a matching network needed if the antenna feed line is very short?
1
Can you reuse FCC certification from a pre-certified RF chip and antenna for a new product?
1
How to use a 2.4 GHz chip antenna for ESP32 design