Why does this low-cost battery powered device use ferrite beads on the power input?

I have just opened up a small, low-cost motion-activated (by PIR) LED light as I am planning on just using the casing for another project.

The PCB inside is clearly designed to be very cheap. It uses a BIS0001 PIR IC found in many other PIR products. There is heavy flux residue, the PCB is thin, and there are bodge capacitors straddling the IC. It's cheap.

For this reason, I am surprised that there are 4 ferrite beads on small wire jumpers, as shown in this image. The wires are the battery connections and the SPDT mode switch. 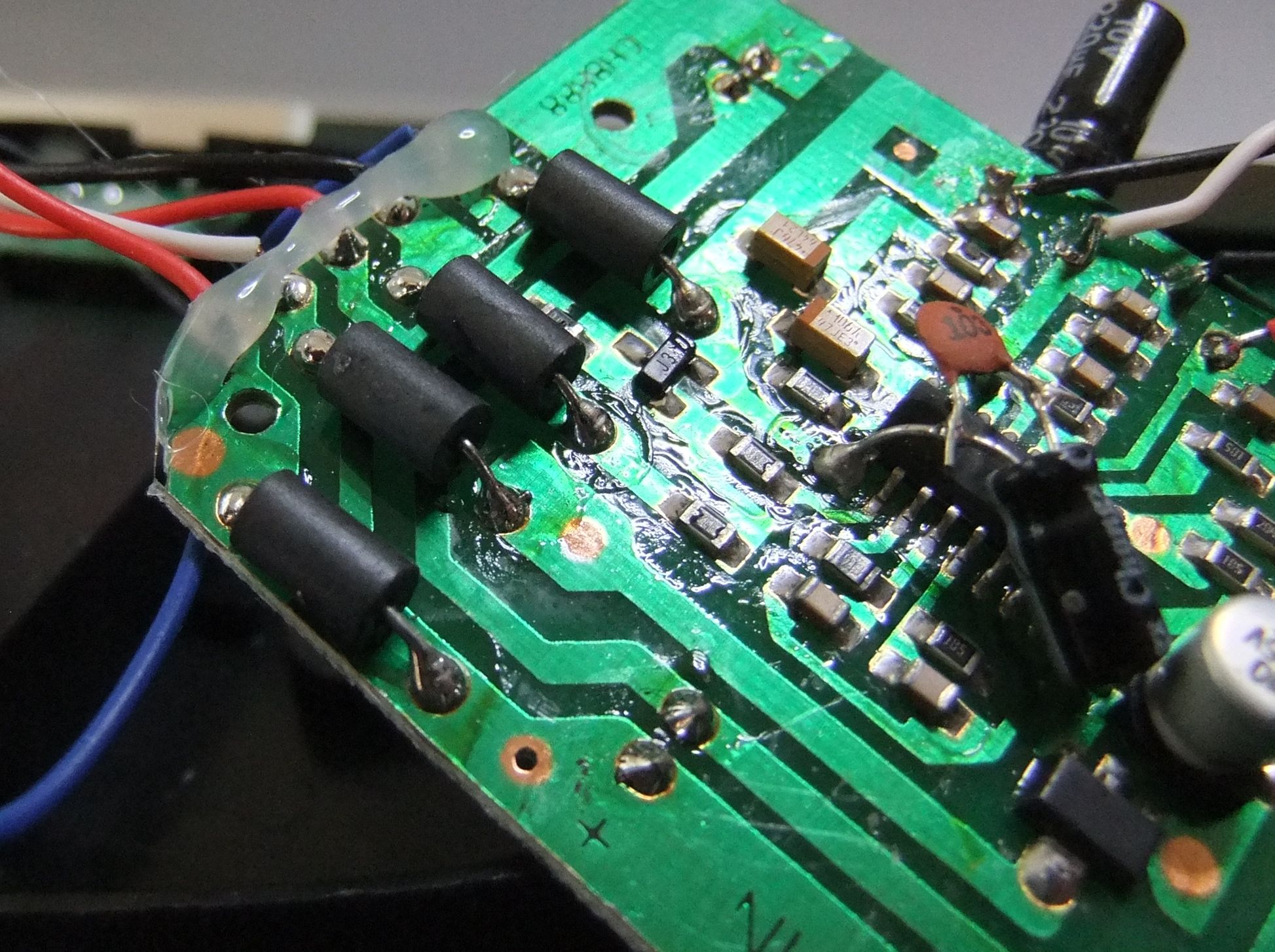 The device is battery powered with no option for mains power and is totally standalone.

The pyroelectic sensor and phototransistor are mounted on a separate PCB. These are connected by hookup wire that is twisted, potentially indicating there are other noise issues on the board.

But why are there 4 of them on this dirt-cheap PIR?

Two possibilities - either or neither may be correct :-).

Larger version of your photo here
The added-afterwards power supply decoupling electrolytic (probably) suggests desperation, and the added to its leads after-afterwards 0.01 uF suggests that desperation was not enough to make it work well enough. That is hardly a level of production level assembly that you'd expect.

The 4 8's at top middle do not seem to have been auspicious enough to remedy the problems.

The hot-melt glue at left will fall off within a year and probably less.Regardless, it is not doing much of a job of providing strain relief. The blue wire looks to be in mortal peril if external movement can move it, and others are not much better.

The caps across the IC are between VCC and the sense input from the sensor. I'm not 100% sure of function, they aren't there on normal BIS0001 boards.

That adds weight (but not certainty) to the theory of noise input being a problem. If they were sensor to ground it would be more likely, but unless the Vcc line is noisy and they are providing feedback (!) then they should reduce noise (and signal) variations at the input. The beads would help keep noise out of the system overall. They do however seem to be part of the original design, although how they are connected electrically is not certain from the photo.

Don't assume everything out there was designed by someone that really knew what they were doing, or that engineering decisions dominated.

Your photo gives the impression of some intern being told to "fix" the problem, whatever that may have been. The owner was probably a sales and accounting guy, so all engineers look alike, so a intern is better than some old fart that wants to be paid real money. Then we can blow off the engineering "department" (the intern) as soon as he has comes up with a fix. We'll never need another engineer after that. Or, maybe this was the second intern fixing the problem from the last one after the first one got canned because the design was done and engineering wasn't needed anymore. By the time the second intern was brought on, those skematic thingies the first one was supposed to write couldn't be found.

No, this sort of stuff really happens.

Not the answer you're looking for? Browse other questions tagged design ferrite-bead or ask your own question.

4
Why did the designer use this motor?
0
How to detect reverse-polarity post-mortem?
1
Help in the design of a super low power device
0
How does one use more than one device requiring the same input voltage on one/same power supply?
1
Why do some computer power cables not have ferrite beads? What type is usually used?