I am designing a Full Bridge DC to DC convertor using SG1525(SG3525).
I'm doing the simulations in OrCAD Capture(PSpice).
Actually, I've successfully simulated the Power section of the converter using four IRF540 in two bridges and igniting their V_GS 's with two Pulse Generators that are isolated(virtually) via VCVS's.
For the control section, OrCAD's PSpice says:

1. R_T is ignored in simulation, so the period must be set by the user. In model editor it is claimed that period is 25us, but in Schematic Editor there is also a period. Which one is used in simulation?

2. What should be connected to the pin OSC? Actually I don't even know what it is used for?

3. As I know, each of the output pins should ignite two MOSFETS... So where should we get feedback from? Since the output is between the two bridges...

ANY help is greatly appreciated :(

Well, I've also built a circuit that uses SG1525. I connected the pin 4 (OSC) to pin 5 (CT) and they altogether connect to a pwm source. Like this: 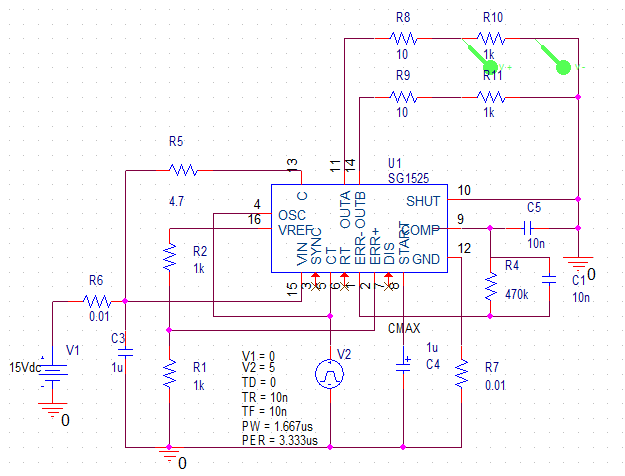 The pulse will be nice as you want it to be. However, the only problem is that both pin 11 and 14, which is OUTA and OUTB gave out the same pulse but not complementary. I am trying to figure it out. Hope this help! :)

Not the answer you're looking for? Browse other questions tagged power-supply pwm dc-dc-converter power-electronics or ask your own question.