LED and lamp in series - why does the bulb not light?

My 6 year old son has just started experimenting with a Snap Circuits style kit and already we have a very basic question. 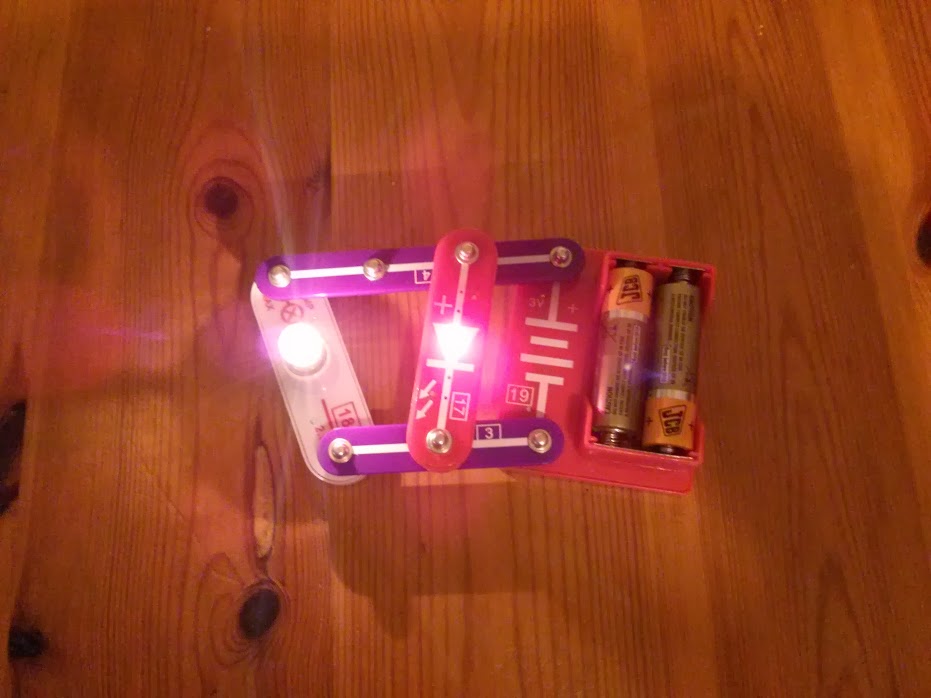 However, if we arrange the LED and lamp in series then only the LED comes on. 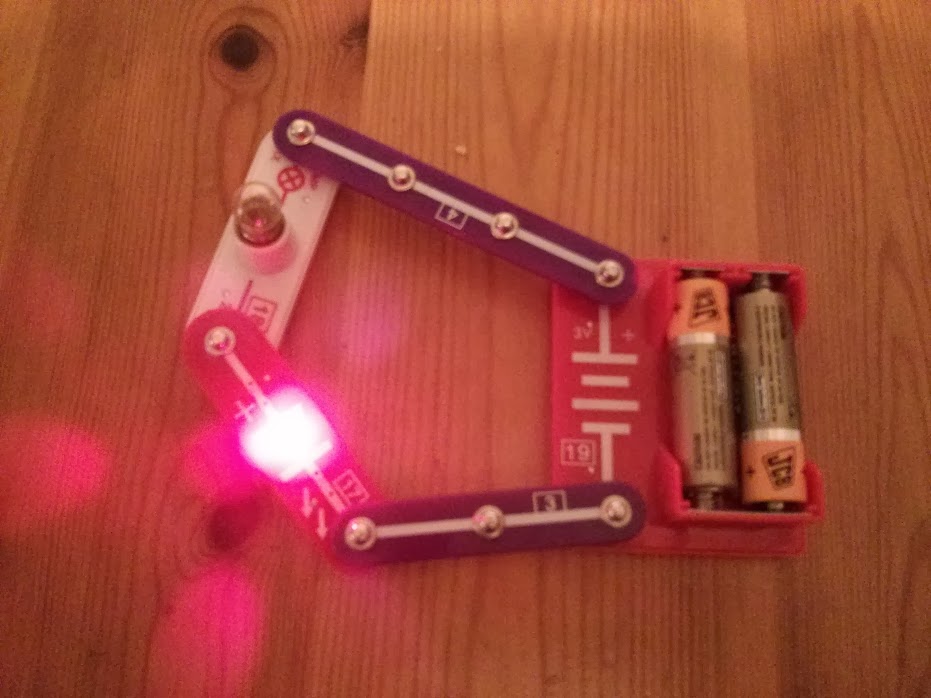 Obviously current is passing through the lamp (if I unscrew the bulb the LED goes off).

So why does the bulb not light?

I'm a bit of a cheapskate so rather than buy proper Snap Circuits I bought a similar generic set from China on eBay (See: Electronic Blocks Kit W-58)

For the parallel connected LED and lamp, each has the entire battery voltage across.

When series connected, the voltage across each must sum to the battery voltage.

While typing this answer, I see that you've added some pictures. It appears that the total battery voltage is about 3V. Given that many LEDs have a forward voltage in excess of 2V, this leaves less than 1V across the bulb.

Do you have a voltmeter with your kit? If so, measure the voltage across the lamp for the series connection.

The LED drops so much voltage that there is very little left for the light bulb.

You have only two 1.5V batteries, which, in series, are barely enough for the LED forward voltage.

Incandescent bulbs quickly go dim when the power which they dissipate is reduced: power is voltage squared, divided by resistance.

For this very reason, dimming incandescent bulbs does not save much energy. Only a small fractional decrease in the dissipated wattage dims a light bulb almost all the way.

Try looking at the lamp in a dark room; you may be able to see a faint red glow. Also, the light from the LED may be preventing you from seeing whatever dim glow the bulb is putting out, even in a dark room. Cover the LED, too.

There MUST be a resistor in series with the LED. An LED is a diode, and diodes rapidly increase the current they pass as the applied voltage rises above a certain point, well below 3V. So without a current-limiting resistor, the LED would pass so much current it would burn out.

The previous answers that say the LED drops the voltage are correct, but the drop is across the combination of the LED and the hidden resistor. The light bulb just adds a little more resistance, which reduces the current a little but only make the LED a tiny bit dimmer. But the light bulb is robbed of the minimum voltage it needs to light.

Instead of 10 ohms, the cold unlit lamp is probably closer to 1 ohm.

At the 20mA of current needed to fully light the LED, the lamp filament dissipates only 400 microwatts of power. (Power = the square of current times resistance: \$P = I^2 \cdot R\$)

The series lamp is little more than a curly bit of wire completing the LED light circuit.

On the other hand, the positive-temperature-coefficient feature of incandescent lamps can be useful; see HP's early audio oscillator and read about Wien bridge oscillators.

Great question! It's parallel versus series circuits, as noted. In parallel, both the lamp and the LED modules get a full 3 Volts. In series, they have to share the 3 Volts, so each gets some. If it were 2 of the same kind of bulb, each would get 1/2 of the voltage. 3 bulbs in series, each gets 1/3, and so forth. The LED module makes it more complex. But let's do the biggest issue first.

Each bulb is a resistor. Connect to the intended voltage, and current flows, entirely defined by the Voltage and Resistance. Mr. Ohm noted that \$\dfrac{E}{I}=R\$, by which he meant, for our purposes, Volts divided by Amperes equals Ohms. ("E" and "I" are physicist-shorthand for charge and current, "R" is resistance.) @Spehro quoted the lamp current as 300 milliamperes, .3 Amps. 3 Volts divided by .3 Amps equals 10 Ohms: \$\dfrac{3V}{0.3A} = 10 \Omega\$.

For discussion purposes, red LEDs have a forward voltage drop of 1.(something) volts, green are around 2 Volts, blue even higher. Of course they have finite resistance values, but it's easiest to think of them as simply removing that fixed voltage. The current can then be calculated as the remaining voltage across the resistor. If there isn't a resistor, there needs to be some more elaborate way to limit the current.

For more fun, put an appropriate size electric motor in series with a bulb, note how bright the bulb is, then put some sort of load on the motor- a finger pressing gently, a fan blade or paddle to move air, etc. See any changes?

One way to Visualize, and therefore understand what is going on in the circuit, this being a very simplified explanation or analogy , would be by thinking that LED does not Pass enough current to light the lamp. Put simply, It has much more resistance than the lamp in essence. If you placed two identical type lamps in series, they should both glow equally bright, as bright as the current provided by the power supply allowed, As an really simple analogy, two 115 volt AC lamps of the same wattage placed in series would require + - 230 Volts to fully illuminate.

However the LED It has much more resistance than the lamp, or more precisely it is a semiconductor and has a forward voltage drop.

Simplified: A forward voltage drop across the LED of roughly 2 volts at say 20mA current draw, (I can't recall the precise numbers right now ) and that looks to be a 3 volt battery configuration, which would leave only about one volt for the lamp. Also the LED will not Pass along enough current to heat the filament (which is classified as an inductor and the LED a semiconductor, so my analogy is imprecise), but the lamp probably would not fully illuminate even if the supplied voltage was higher to compensate for the forward voltage drop of the LED.

I hope that makes sense. I apologize if not, but I am rushed and only saw this as I was about to have to get off line and do something else.

Your question reminds me of a similar experiment in which two unequal wattage but identical voltage lamps are connected in series. A voltage twice the size of one of the lamps is suddenly applied to the arrangement - just watch what happens. In choosing your voltage please be aware of electrical safety. Lamps rated at 6 volts would work fine. Suggest a car stop / sidelight bulb at 6 volts would be fine. This experiment was used in a GCE "A" Physics practical exam about 30 years ago!

Another thing you could try is connecting different 240 volt filament lamps with clear glass shells to 12 volt - if I remember correctly 25 watt lamps work well and will give a gentle filament glow which is very pleasing to view. Again please be aware of electrical safety.

I'm just going to ignore voltage drops for a moment, and explain it in terms of current.

The light from the LED is roughly proportional to the current passing through it， whereas the bulb brightness (for a dim/underpowered bulb!) has a proportionality closer to the cube of input current. If you put a "grain of wheat" lamp (20ma), in series with the LED, and adjust the current, this will become clear.

Now for some physics: Batteries represent an almost ideal voltage source, this is because inside the battery there is a chemical reaction which moves electrons from the cathode(+) to the anode(-) until the potential difference between the two terminals reaches the open-circuit voltage. I will call this Vbatt.

When an electrical connection is made between the two terminals, the electrons flow in the external connection from (-) to (+) terminal due to this potential difference, creating a "circuit" of electrons. This electron flow reduces the potential difference between the terminals, causing the reaction to speed up and supply more electrons, and the current increases. As it does so, it creates an increasing voltage in the load due to resistance. The current and potential difference at the terminals rises until it is enough to stop the reaction rate increasing. Mathematicaly, I1*R1=Vbatt.

@Mark McLaren Interesting question....but if you could swap the position of led and bulb without changing polarity(as it is) in series circuit, then the bulb will light if my logic is correct....Needless to say that the voltage is dropped across LED first and the remaining voltage(3 VOLT MINUS voltage used by LED) is insufficient for bulb..although it has sufficient current bcoz its in series. The electrons flow from - polarity of batteries towards the led first and may be thats why the voltage first drops across led and the remaining across the lamp....please try to swap the position of led and lamp and see if the lamp lights...hopefully even the LED will light because led requires low voltage and the remaining voltage will suffice for led. i am curious

0
LED and light bulb in series
0
Why does such a lamp and two battery circuit not work?
3
Dimensioning smoothing capacitor for China DIY LED lamp
0
Modify 120v lamp dimmer for LED bulb
0
Light bulb LED equivalent of a CFL (Compact Fluorescent Lamp)
0
LED light bulb in series or parallel?
1
Is there a way to make an LED blink using a passive circuit?
6
How does this tone generator circuit work?