Harmonics are bad... But how bad?

In power systems, there are rules and regulations stating what levels of harmonic distortion is acceptable. One example I've seen for voltage distortion is: THD < 8%, single component harmonic <5%. These values are (hopefully) not random numbers.

Harmonics are unwanted currents that overload wiring and transformers, creating heat and, in extreme cases, fire. These currents are harmful to equipment. They weaken the reliability and shorten the life expectancy of equipment exposed to the distortion

For induction machines, negative sequence harmonic currents will also cause a negative torque, which of course isn't good.

My question is: How bad is it, really? What can the consequences be if the total harmonic voltage distortion is 10% instead of 8%, if the 7th harmonic is 6% or if the negative 5th harmonic current is 10%. The reason why I ask is: Reducing harmonics does not come for free, is it really worth it in all cases? I know I have to adhere to the regulations, but assuming there were no regulations, what then?

Does anyone have any experience in this area?

I forgot to mention the following in the question: The system I'm studying is not connected to the main grid. It has its own generators, UPS-system and all other necessary infrastructure. The operator and the owner of the system is the same company. The specific regulations I'm mentioning are for such isolated systems, not systems connected to the main grid (could for instance be a vessel).

If you have your own power grid, and all the equipment is your own (thus you would need to take all the costs of installation, maintenance etc), then why are there limits and not guidelines when it comes to harmonics? I understand why there are rules regarding for instance short-circuit levels, arc-flash hazard etc. etc. I also understand regulations regarding voltage drops, as this may lead to motors stalling, loss of excitation and more, I just don't get why there are strict regulations when it comes to harmonics.

How much damage can it do?

Note: I am not an expert in harmonics.

It's valid to ask why the harmonics levels are set to the exact level they are.

I am currently reading AS 61000.3.6 (internationally, IEC 61000.3.6) which is about the nitty-gritty details of how the utilities calculate the harmonics emission limits for MV/HV/EHV customers.

The key point is that the objective of the harmonics emission limits is to ensure that the compatibility limits aren't violated.

You ask why there are limits on harmonics, even within your own islanded installation, where you won't be affecting other customers.

From Schneider's Cahier Technique 199 Power Quality we have the following list of negative effects from harmonics: 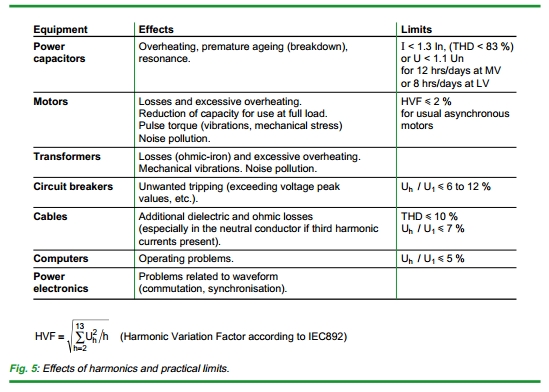 From Schneider's Cahier Technique No. 152, Harmonic disturbances in networks, and their treatment, we have a few more effects not mentioned above:

Harmonic voltages can disturb controllers used in electronic systems. They can, for example, affect thyristor switching conditions by displacing the zero-crossing of the voltage wave (see IEC 146-2 and Schneider Electric "Cahier Technique" n°141).

Interference on communication and control circuits (telephone, control and monitoring)

Disturbances are observed when communication or control circuits are run along side power distribution circuits carrying distorted currents...

Some of these effects might be severe. For example, if harmonics were so bad as to cause interference on a critical control circuit, causing maloperation of that circuit, that would be bad regardless of its effect (or not) on other customers.

So, from this perspective, the limits are there to force you to consider electromagnetic compatibility with vulnerable equipment in your own installation.

Anecdotally, dirty power supplies cause all kinds of intermittent and hard-to-find issues.

My boss told me a story about how they installed a plant full of VSD's (VVVF drives) with no harmonic filtering. The problem was that substations would trip on earth fault (?) seemingly at random when drives were started up - including substations on the far side of the plant to the VSD being started!

Eventually it was determined that the relays were mal-operating due to harmonic currents. From memory, the harmonic current were flowing through the entire plant via earth paths, including structural metalwork and metal cable trays, which is why a VSD on one side of the plant was able to affect a substation on the other side. The electrical paths had to be broken up by replacing some sections of metal tray with plastic trays, and so on.

In the end the problem was only solved after an expensive course of rectification works was performed. Again, the limits are there to ensure that you have to consider harmonics from the start, so this doesn't happen to you!

The power companies want you to reduce harmonics in your loads/appliances because those harmonics are not billable. If you mathematically multiplied your clean voltage waveform by the current waveform (which contained harmonics), only the primary frequency of the current would result in a power that had an average (and is billable). The other currents do not contribute to power output of your machine/load/appliance BUT the copper wires to your premises have to be thick enough to take this extra current.

It's all part of power factor correction and one of its primary aims is to reduce losses and save money.

If these harmonics were whizzing up and down the wiring in your house/building there might also be an EMC radiation issue and certain equipment might be interfered with too.

As for voltage waveform distortion - you, as a customer would not want this because it may lead to excess heat being generated by motors (due to the higher harmonics) so I'd say the voltage harmonic distortion limits are there to protect the consumer as much as anything else.

Short answer, increased harmonics in the load ( High capacitance, or inductance) cause the voltage and current curves to get out of phase by as much as 90 degrees. When this happens the voltage is zero when the current is at its peek, and vice-versa. The result is an increase in Resistance ${R_total= \sqrt{R^2+(C_r-L_r)^2}}$ Increased resistance means increased heat generation which can cause winding failure. So yes high harmonics are bad. Utilities have large banks of capacitors and inductors which allow them to regulate harmonics. You don't. So if you own your generator they are really bad. Make sure that you balance your capacitive and inductive loads.

Not the answer you're looking for? Browse other questions tagged failure harmonics or ask your own question.

0
Are voltage harmonics critical in the electric grid?