I have read that electrostatic charges produced by human body can be as high as up to a several thousand volts.

How exactly damage of transistors happens

Then, why FETs are subjects to be damaged in particular. I often hear about protection against electrostatics for FETs, but for BJT not so often, and not in mention for diodes, also very rare, although they are also PN junction devices.

At the moment of discharge, there is current flowing from the charged object, through the transistor, and finally to ground or other lower potential.

Ohm's law is in effect here, and the higher the resistance, the higher will be the voltage observed across the two terminals of the "device under destruction".

FET's have a very high resistance on their gate lead. For MOS FET's, that resistance is extremely high. A BJT has a much lower resistance, although, when you are dealing with static discharge, there's no assurance you won't blow that up as well.

As a side effect, BJT circuits usually have relatively small resistors across their terminals to bias the device, and that will limit the IR drop even further.

The voltage is one thing, but remember that the human body has a certain amount of capacitance to earth, and a relatively small series resistance. That means that there is energy stored (\$C \cdot V^2 \over 2\$ ) that can be discharged through the device in question.

If the human body capacitance was much less, say 0.1pF rather than 100pF, the capacitance of something like a MOSFET would divide down the voltage from, say, 1kV to maybe 20V, and most MOSFETs would survive that. 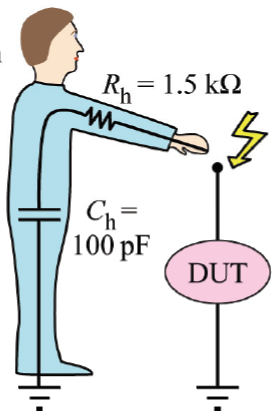 The primary mechanism for ESD damage of MOSFETs is breakdown of the gate insulation, which is very thin (as thin as 5 atoms) layer of silicon oxide. Once it is breached by a discharge, the transistor is probably ruined.

Because junctions (as opposed to insulation) can break down without damage if the energy is not too great in relation to the size of the junction and other factors, bipolar transistors and diodes tend to be more more rugged, however RF (especially microwave) transistors and similar diodes have very fine geometry (thin conductors and tiny junctions) so that the energy in an ESD event could cause damage by melting metal or damaging the junction itself.

Most MOSFETs made today either have internal protection or have such high gate capacitance that even (slightly) careless handling is less likely than in the past to cause damage, but caution dictates the use of ESD-safe techniques for most semiconductors, as it is still quite possible to cause damage. It is mandatory for high-reliability (such as space) applications. The big fear is that it could cause damage that would result in a failure at some later date, when repair becomes rather inconvenient and expensive. 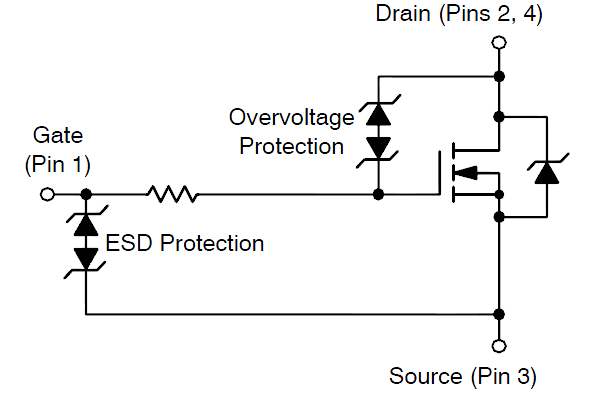 In the old days some transistors were supplied with a spring clip around the pins, shorting them together, to be removed after the transistor was installed. 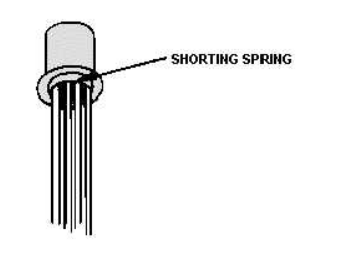 First, a voltage is never applied TO a point but always BETWEEN two points.

The reason a MOSFET is killed so easily is that it contains a very thing layer if isolation (= very high impedance) between its gate and its source-drain channel. The thinner this layer, the better the specs of the MOSFET, but also the lower its breakdown voltage. A common rating for this layer is 20V maximum. A diode or BJT does not have this feature, hence they not so vulnerable.

Not the answer you're looking for? Browse other questions tagged transistors fet or ask your own question.

13
Basic operation of a bipolar junction transistor
5
Why can current flow through the reverse biased base-collector junction (N-P junction) in a BJT with a forward biased base-emitter junction?
3
Question on BJT operation mode
0
BJT cut-off currents magnitudes and directions
0
Does a transistor work by connecting the collector to emitter? If so, why do transistor regulators work?
0
In an NPN transistor, why doesn't current flow without applying a base voltage?
0
Transistor as a Switch in Cutoff and Saturation
0
Confusion about cutoff mode of NPN transistor
0
Can we present the current-driven BJT as two cascaded non-linear converters?