I am interfacing a flash memory component (M25P16) to a PIC microcontroller (PIC18F14K22) using SPI. However, I am unable to see any data come through on the slave output line at all (literally nothing, as if the chip wasn't even in the circuit).

Attached is a logic analyzer trace and circuit diagram. The logic snapshot is in attempt to read the device ID with command 0x9E, followed by some empty clock cycles to read the data. As you can see, SO line is dead.

I believe I have set the clock polarity and phase correctly (data is output from PIC on the rising edge of the clock, and the clock is idle-low/active-high. Also, my chip select pin is being held high (via pull-up) during startup and then driven low for the transaction. Clock speed is 500KHz, well below the maximum speed. Write protect and Hold lines are tied to Vcc, which is 3.3V. I have pull down resistors for the data and clock lines to bias them low when idle. Although, I have tried letting the MISO line float, as well, to no avail. 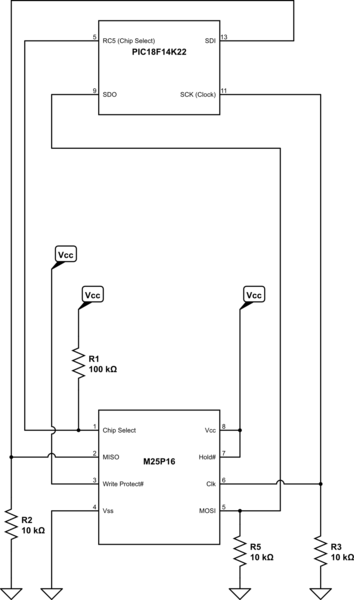 As far as I can tell, you're doing everything right.

If this were sitting on my workbench, here's the next thing I would do:

On my test jig (but not on production units), I would temporarily change resistor on MISO changed to weakly pull MISO to around 1.5 V -- that helps distinguish between high (near 3.3 V), low (near 0 V), and tristate (near 1.5 V).

I would re-run the test and make sure the only thing connected to MISO is the o'scope (or logic analyzer) probe and that bias resistor -- not even the PIC connected -- to rule out the possibility that the PIC is somehow accidentally driving MISO to GND.

I would make a custom test program on the PIC that does nothing but select the flash chip, attempt a READ IDENTIFICATION and reads 20 bytes, then deselects the flash chip, and then repeats forever. (It looks like maybe you've already done this).

So I might check the voltages by (a) tweaking the custom test program so it runs the CLK at 1 Hz, so I can check each line on the flash chip with a voltmeter, or (b) running the test program at a more typical speed -- 500 KHz or 10 MHz should work fine -- and check each pin with an actual o'scope (not just a logic analyzer).

It's pretty easy to destroy a flash chip so it looks fine under visual inspection, but damaged such that now it won't ever work (always tri-state or always outputs 0).

Perhaps swap the flash chip with an "identical" M25P16 chip on something like the JeeLink and see if the problem follows the flash chip or stays with the PIC chip.

If the schematic above is your complete circuit: add a decoupling capacitor (100nF) to the EEPROM (between Vcc and GND), and maybe one to the PIC as well.

The pull-down / pull-up resistors can be removed, though they should not affect the behaviour you see.

The serial data you send to the EEPROM looks good, when compared with what the M25P16 data sheet specifies (on page 9). So I guess its not a SPI problem, but something on the side of the EEPROM.

Not the answer you're looking for? Browse other questions tagged pic spi flash or ask your own question.