Does the fundamental frequency affect the bit rate on a wire?

This is from the book Computer Networks by Tennenbaum:

The bandwidth is still the width of the band of frequencies that are passed, and the information that can be carried depends only on this width and not on the starting and ending frequencies.

So what I understand from this is, if I have a bandwidth of say 500 kHz, even if my base frequency is 1MHz or 1GHz, the bit rate on the same wire will be same.

However then Tennenbaum gives an example, he calculates the bit rate he can get from an ordinary phone line, first states:

And then he gives this table: 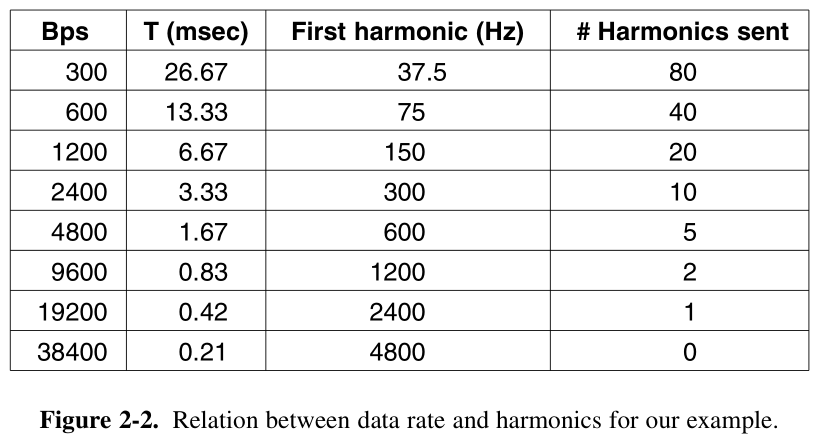 Well it is clear that there is a relationship between the data rate and the harmonics. It seems like (from the table), if you want more bit rates, you need a higher First Harmonic (the fundamental frequency), and upon that you can build the second, third harmonics (meaning using the frequency range - the bandwidth)...

So what am I missing here?

It is shown in the table that if I have a higher fundamental frequency, I will be able to send more data in less time, but then also Tennenbaum states that the information that can be carried only depends on the bandwidth?

From a theoretical point of view, the maximum capacity of a channel affected by AWGN Noise (Additive Gaussian Gaussian Noise) is determined by the Shannon–Hartley theorem:

This means you can't put more than that information on a channel with a band (B= \$f_{MAX}-f_{MIN}\$) without making the communication unreliable.

Then we go on the modulations: every modulation has a particular spectrum efficiency and an erroneous bit probability. More levels you use (QPSK vs 16-QAM, p.e.), more bit for each symbol (= more efficiency) but more erroneous symbols (similar to the bit error rate, with a Gray code).
The spectrum is directly related to the shaping impulse used by the modulation. A very common one is the raised cosine impulse (cause it has no Inter-Symbol Interference), that decreases the efficiency of a factor \$ (1+ \alpha) \$

Again we go on codes, that could give a huge gain, especially using concatenated codes like Reed-Solomon + Viterbi, using Turbo codes or LDPC.

Every effort is done to approach the Shannon capacity limit.

Consider an extreme example, a base frequency of 10 MHz, but a tiny bandwidth, of 1 Hz. All you can really do with this channel is emit a 10 MHz sine wave.

In response, one might say: "But I can turn that sine wave on and off to encode my ones and zeros," but the rate at which you can switch is dependent on the bandwidth. After all, the tiny bandwidth suggests a pure sine wave.

If you take alternating 10 MHz sinewave with silence (to represent ones and zeros), then apply a Fourier Transform, which will find the frequency content, you'll notice there is a lot of much higher frequency content. The ability to create the sharp transitions requires the higher bandwidth.

Finally, consider a physical example. An example of a channel with a small bandwidth would be resonance. When you excite a resonator, it will start to ring. As soon as you try to shut it off, it will continue to ring and take a long time to decay, essentially preventing you from transmitting a zero.

Actually, that's a terrible table; for one thing, Tannenbaum gets mixed up about whether he's talking about bits or bytes. For another thing, that whole chapter was written back when 9600 bps modems were pretty much state of the art — long before 33.6 kbps modems became common.

For a better discussion about the relationship between bandwidth, signal-to-noise ratio and channel capacity, see this question.

Seems that the table might be related to additional information provided by the author of the book. Unfortunately I don't have this book, therefore I'll just try to describe what do I understand from the table.

Now, we want to see how much time will it take to transmit 8 bits (1 byte) of data at different bit-rates. The equation is very simple:

There should be nothing confusing about this column - the higher the bit rate, the shorter the transmission time.

We also want to know what is the lowest frequency associated with transmitting information in 8 bits chunks over the channel. The formula is also pretty straightforward in this case:

Assuming that the lowest frequency corresponds to byte 11110000 (which can be though of as a single cycle signal 10 having longer period), we can see that there is just a single cycle in this pattern, thus the formula becomes:

This is the most confusing column in the table, which requires the whole context of the discussion in the book in order to be interpreted.

My guess is that the author wanted to show that if you make use of just the fraction of available BW, then you still can use the remaining BW for data transmission. The technique of partitioning a single physical channel into multiple transmission channels is called Frequency-division multiplexing.

In case of FDM, the total bit-rate becomes:

You can see that the total attainable bit-rates have the same order of magnitude, although the bit-rates for a transfer of the actual information differ significantly. This is not a coincidence - the maximal bit-rate of a physical channel depends on the BW, which is the same in both cases (and you can check for other bit rates in the table that the total bit-rate will be approximately the same). The differences in the total bit-rates for different rows in the table arise due to the fact that there will be different unused portions of the BW (the remainder of dividing 3kHz by the frequency of the first harmonic).

Assuming that the author of the book did explain the idea behind FDM at some earlier stage in the book, this table makes perfect sense and shows that BW indeed provides a measure of the attainable data rates on the channel.

The actual bit-rate at which the data is transmitted is not that important, because you can always use the remaining BW and allocate additional transmission channels in it.

Note: the discussion here is purely theoretical. The actual implementation of FDM schemes can be overwhelmingly complicated and reduce the initial BW (by introducing guard bands for example).

The full answer below is likely overly remedial but I wanted to include it to be thorough.

Full answer: For simplicity, I will assume all periodic functions have a period which is an integer multiple of .5 Hz.

Not the answer you're looking for? Browse other questions tagged signal frequency bandwidth bit-rate or ask your own question.

9
Why does more bandwidth mean higher bit rate in digital transmission?
2
Signal rate, data rate and bandwidth in digital signals
0
How to find the fundamental frequency and present harmonics from a graph?
0
The relation between a link speed and Fourier coefficients
3
How does the maximum transmission rate depend on the carrier frequency?
2
UART bit-rate vs frequency fundamentals
1
How does Nyquist bit rate formula relate Bandwidth, Signal Rate, and Bit Rate?
0
Does data rate increase with channel frequency?
0
Why does higher bitrate requires higher bandwith?