Why are there only four passive elements?

I've read that there are four types of passive elements: resistances, capacitors, inductors and memristors.

The memristor was predicted 30 years before it was produced. But why couldn't you invent other type of passive element? Is there a proof?

The definition I'm using of passive elements is something with no gain, no control and linear.

There are four physical quantities of interest for electronics: voltage, flux, charge, and current. If you have four things and want to pick two, order not mattering, there are 4C2 = 6 ways to do that. Two of the physical quantities are defined in terms of the other two. (Current is change in charge over time. Voltage is change in flux over time.) That leaves four possible relationships: resistance, inductance, capacitance, and memristance. 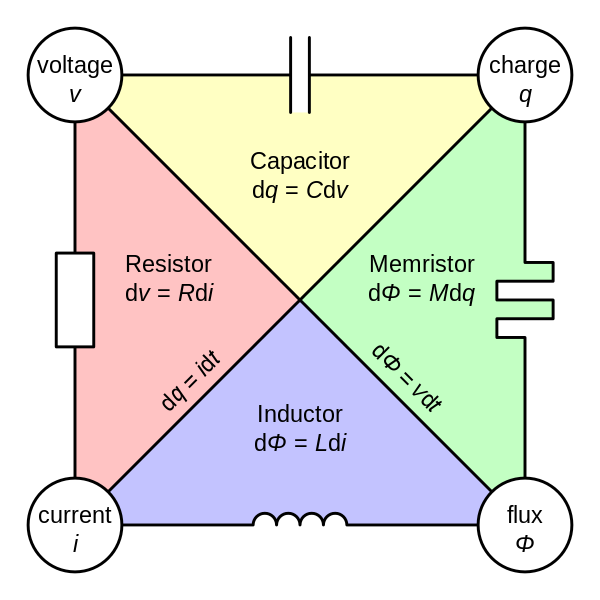 If you want another fundamental component, you need another physical quantity to relate to these four. And while there are many physical quantities one might measure, none seem so tightly coupled as these. I'd suppose this is because electricity and magnetism are two aspects of the same force. I'd further suppose that since electromagnetism is now understood to be part of the electroweak force, one might be able to posit some relationships between the weak nuclear interaction and our four elements of voltage, current, charge, and flux.

I haven't the first clue how this would be physically manifested, especially given the relative weakness of the weak nuclear force at anything short of intranuclear distances. Perhaps in the presence of strong magnetic or electrical fields affecting the rates of radioactive decay? Or in precipitating or preventing nuclear fusion? I'd yet further suppose (I'm on a roll) that the field strengths required would be phenomenal, which is why they're not practical for everyday engineering.

But that's a lot of supposition. I am a mere engineer, and unqualified to speculate on such things.

But why couldn't you invent other type of passive element? Is there a proof?

Well, there is a proof, but it's circular. If you take "the four fundamental electronic variables", there are only six ways to combine them linearly. Four of the ways are components, and the other two are definitions. Stephen's answer explains this well. There are only four passive components because whoever made that claim only allowed four variables.

I can "invent" more "missing components" by introducing more variables. Current is the derivative of charge with respect to time:

I'm going to define a new term: surgingness. It's the derivative of current with respect to time:

Mind blown? Put it back together. We do this all the time in physics. These sequences are analogous:

We can differentiate variables as many times as we want and give the results names, if we want. Physics even has a name for the derivative of acceleration: jerk.

Now we can stick surgingness in that graphic from Stephen's answer. It goes below and to the left of current.

I'm going to call \$P\$ Philistance. The component is called a Philator.

What's the utility of this component? I haven't a clue, but I predict it exists. In a few decades, when it's invented, I'll say "I told you so" and be famous.

I think there are a large number of "passive" components yet to be both discovered and invented. "Passive" is a somewhat deceptive and ambiguous term we use in electronics. In electronics we have a lot of loose terminology that throws beginners a curve ball. You would think that for an exact science we would use more exact language. Not so.

As other posters have indicated the big three passives are resistors, capacitors and inductors. I don't know about this memristor gizmo. In my 50+ years of electronics experience I never held one in my hand or had one come up in a circuit design I've worked on.

Nevertheless, I think if you could come up with a device which could convert frequency to a proportional DC voltage, like a thermocouple converts temperature to voltage, you might join the likes of Michael Faraday in EE Heaven.

Likewise, if you could invent a device which converts electron flow directly to sound without the use of a magnet and coil, you might be onto something big as well.

Or for that matter an elastic material that directly converts current to motive force - the elusive artificial muscle tissue. That would forever change the world of pornography as much as Michael Faraday's vibrating coil did.

It's been quite a while since the EE world has enjoyed a new passive component. Keep us posted on your progress.

26
Differentiation between passive and active components