I don't know what I'm doing wrong. Perhaps someone can explain this. Is there any reason an ammeter would cause a voltage regulator to explode?

I'm trying to understand how to use the LM317 voltage regulator with a potentiometer to reduce 12 volts to a variable voltage between 1.25 and 10.5 volts. The 12V is generated from an ATX PC power supply, and the circuit I am using can be found here: http://www.electronics-lab.com/articles/LM317/

The only difference to the above schematic is that for R1 I am using a 680 ohm resistor, and R2 would be a 5k ohm potentiometer but I haven't even gotten that far yet. After building the circuit, I connected a multimeter to the output of the circuit and shorted what would have been the potentiometer (therefore simulating 0 ohms or full open) and read 12.5 volts. It read steady for several seconds, so I switched from volts to amps on the multimeter, and POW! The LM317 was no more.

Perhaps there is something fundamental I am missing, but what would cause this? Are my calculations (using the above website as a reference) completely wrong? If so, what would I need to do to accomplish my goal of taking a 12V supply and using a potentiometer to vary the output in as wide of a range as possible? Would there be a benefit to having a fuse (perhaps 1 amp) on the input voltage?

When you changed your meter to read current, presumably moving the red lead to the "10 Amp" socket, the meter would have very low resistance. When you then connected the meter between the LM317 output and ground, a very large current would flow, apparently causing the LM317 to explode.

If I recall correctly, the LM317 is spec'd to deliver 1 amp, with due regard to voltage drop, power dissipation, heatsinks and phase of the moon - that only states the current that it can safely carry under suitable conditions - it DOES NOT limit the current to that value!

The current measurement function of a multimeter should only be used with the meter connected in series with a load whose current drain you wish to measure. It must NEVER be connected directly across a power supply.

It's possible you connected the LM317 backwards so that it was conducting as a diode. That's why you got about 12V out rather than 1.25V. Then when you shorted the output by turning your meter to amperes, it died a horrible death.

Ammeters must only be connected in series with a load! Never parallel.

This is a view of the package from the TOP (with the part number markings visible). 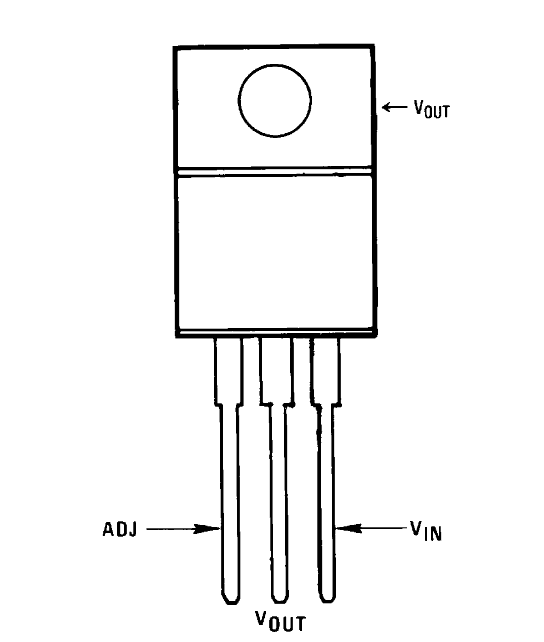 Suggest you stay away from reading current completely, especially with that meter that has an unfused range. I hope you were wearing safety glasses.

I wanted to follow up after some more testing. Thank you all again for the feedback, as it has helped to pinpoint the issue and I believe the circuit is working as expected now.

The first problem was, as Peter said, that I had no load on the circuit as I was trying to read amperage. I now understand that this is essentially creating a short which caused the disastrous results.

Secondly, I had a similar issue yesterday when attempting a similar circuit; in that case, as Spehro guessed, I had read the pinout incorrectly. In today's case, however, I did have it wired properly.

Third, it seems as a recurring theme, user error was to blame. When I said I believed I was reading 12.5 volts on the voltmeter during the first test, in fact I now believe I was actually misreading the decimal and was probably reading 1.25 volts instead. After reconstructing the circuit again and this time using a CPU fan as a load, testing voltage with a 0 ohm (short) in place of the potentiometer gave a reading of 1.25 volts, and replacing that short with a 4.7k ohm resistor to simulate the 5k pot I plan on using, read an output of 10+ volts and allowed the CPU fan to run properly.

Thank you all again for the input, and I hope anyone with similar issues can take away some lessons as valuable as those that I have throughout this post!

Not the answer you're looking for? Browse other questions tagged power-supply voltage voltage-regulator lm317 failure or ask your own question.