I have created the following test circuit to confirm a number of questions around current flow and voltage in a 1-wire network. At the end, although the network functions, I have some questions that I would appreciate either confirmation or clarification on. 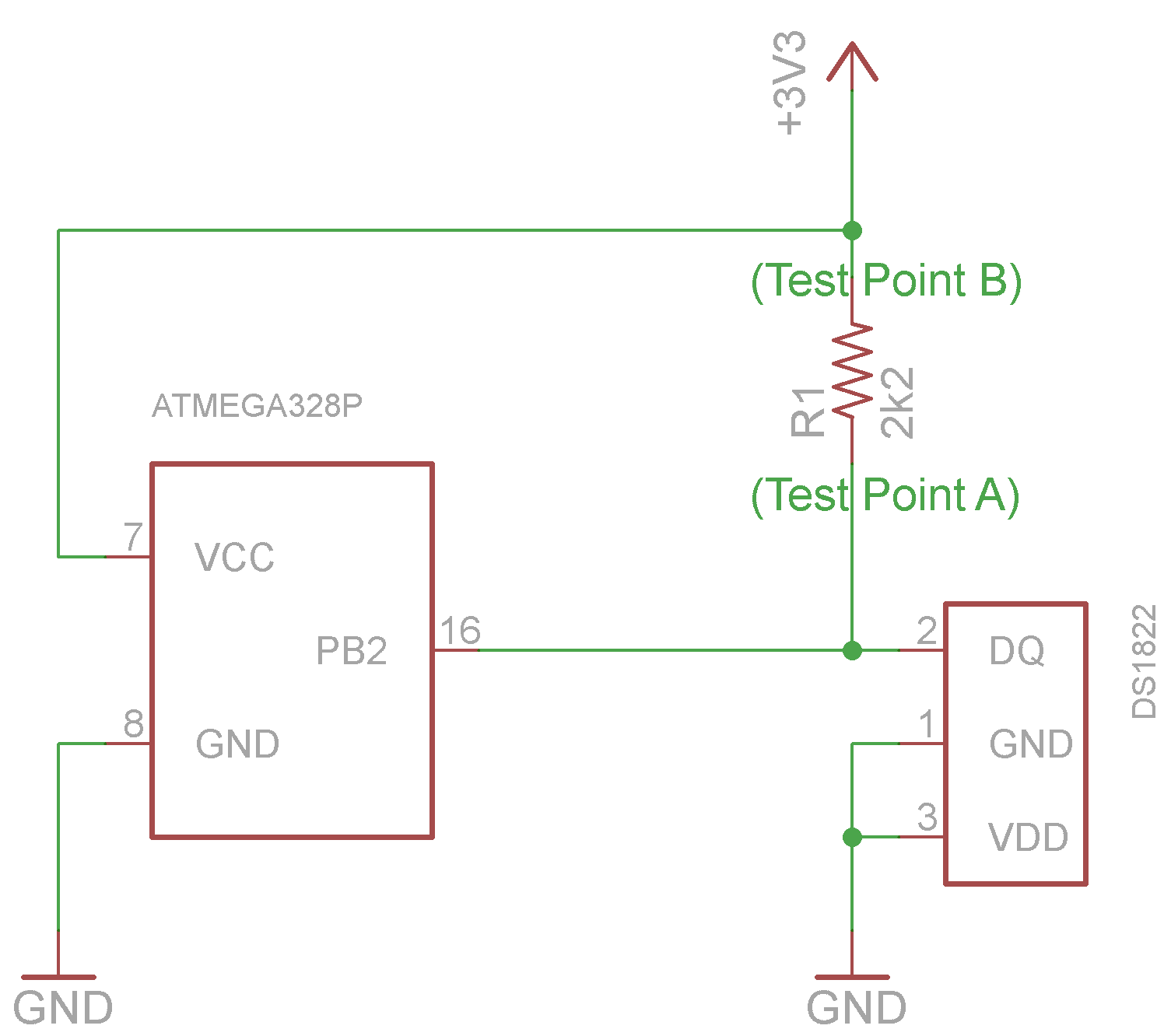 In building the network, I first tested the use of the ATMega328p pin 16 (PB2) as an open drain output. This is accomplished by setting the port to an input (internal pull-ups disalbed) to allow the line to be pulled high by R1 or alternatively set as an output and pulling the line low.

When PB2 is set as an input, I read 3.339V between PB2 and GND and measure no current as expected.

When PB2 is set as an output and pulled low, I read 40mV between PB2 and GND measure ~1.5mA of current. According to Ohm's law, this is the expected amount of current that PB2 should sink given a 3.3v power source and a 2.2k Ohm resistor.

The schematic shows the use of a DS1822 in parasitic power mode. This means that it will draw power from the 1-wire bus in order to power the part for normal operations as well as specific operations such as a temperature conversion. In the case of the temperature conversion, the part needs to see at least 2.8V and up to 1.5mA of current at the DQ pin. This would not be possible with the schematic if PB2 was purely an open drain output. To compensate for this, one can either create a strong pull-up or pull PB2 high, thereby supplying the voltage level and current required for the operation.

When performing a temperature conversion (the operation that would require the higher current and voltage), I have looked at the voltage and current characteristics both when pulling PB2 high and when not.

When PB2 is set as an input and a temperature conversion is in progress, I observe that .66mA is drawn between (Test Point A) and DQ. I do not see noticeable current drawn between PB2 and DQ. I read a voltage between DQ and the DS1822 GND of 1.88. This would imply a voltage drop of 1.45. Again using Ohm's law this indicates ~0.66mA of current are in use, which is what was observed. I am also able to confirm the voltage level using a scope. 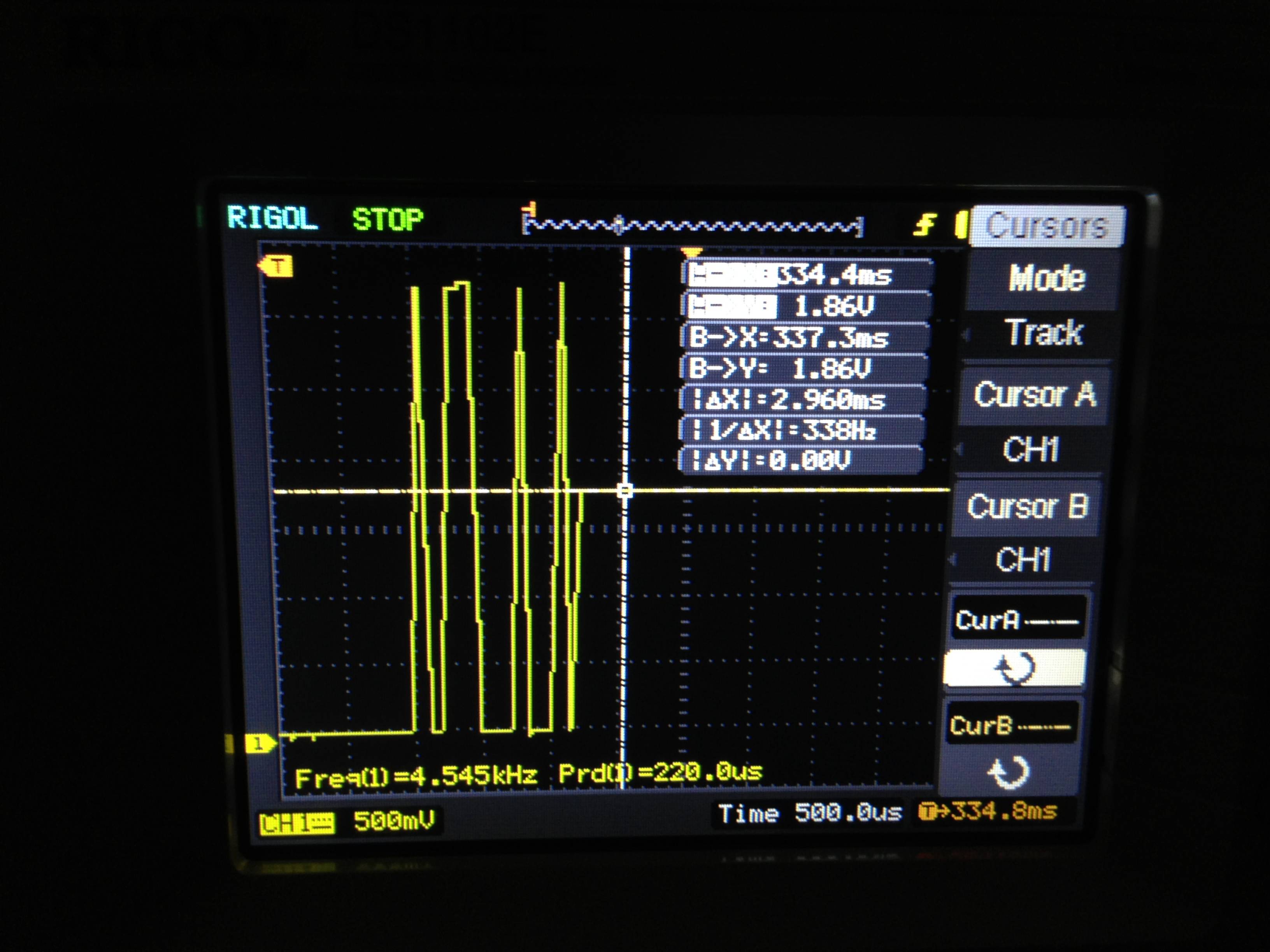 QUESTION 5: DELETED (this question was asked in error)

QUESTION 6: Has a parallel circuit been created? Is the DS1822 DQ pin drawing current from two sources?

QUESTION 7: How can I use Ohm's law (or can I) to correlate the observed current draw to the voltage level?

Thank you for your assistance. It has been a challenge to take some of my readings and apply them accurately to this particular circuit.

When data is being transferred between the DS1822 and the ATMega, DQ will be switching between Ground and +3 - under these conditions, your meter will read an average voltage which won't be a particularly meaningful value.

Likewise, the current measured between DQ and the pull-up resistor will be flowing alterantely into and out of DQ - the meter will average these + and - currents, and likely read something near zero.

To see what is really happening during a data tranfer you really need an oscilliscope.

Not the answer you're looking for? Browse other questions tagged arduino voltage current 1-wire or ask your own question.

3
DS1822 1-Wire Sensor, Parasitic Power, and Strong Pull-Up Circuit
4
N-Channel MOSFET and Voltage Drop
0
Voltage Drop Between Battery and Load
0
How does an MCU pin detect a voltage?
0
DC Power supply, current and voltage are independent of each other?
1
Relation between current, resistance and voltage according to Ohm's law, Joules law of heat and P=IV
0
How does a load decide the amount of current drawn in a circuit?