Behavior of a Transistor?

So I wanted to ask as to why a Transistor behaves as an open switch in cut-off mode though it is not open and as a closed switch in saturated mode though it has some resistance? (In CE configuration) 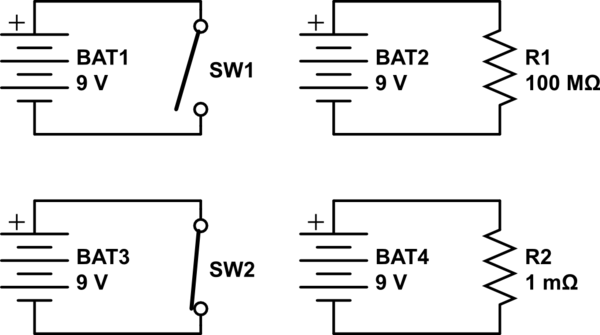 How much current is flowing through BAT1 and SW1? The circuit is open so no current can flow. \$0A\$.

How much current is flowing through BAT3 and SW2? There's no resistance to limit the current, so it is unlimited. \$\infty A\$ (through in practice this can't happen, we are talking about ideals)

You have to work the transistor in saturation or cutoff mode because if you don't, you get a transistor that's somewhere in between, like a resistor, but not a switch. Instead of almost \$0\Omega\$ or almost \$\infty\Omega\$ you get a number in between. There are many applications of transistors like this (amplifiers), but an amplifier is not like a switch.

2
Transistor selection for 5V LED circuit
4
Why might the collector-emitter voltage for this transistor be so high?
1
Can a transistor transistion between cut-off and active without going through the linear region?
1
LED strip doesn't turn off completely by transistor
1
Some questions about a transistor latch?
0
Bipolar transistor as a switch. Cut off mode?
0
Transistor as a Switch in Cutoff and Saturation
1
Transistor Gain Values