What's the function the network outside a crystal oscillator connected to an IC?

Take a look at this: 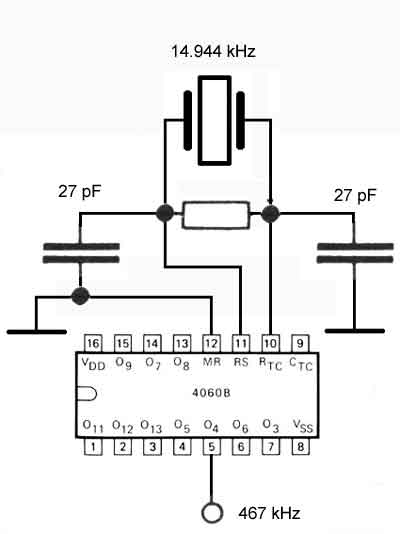 Then general network is commonly seen when connecting an oscillator to an IC. What is the purpose of this network? Is there an article I can read on it?

The resistor is used to put the logic level buffer inside the CD4060 into linear mode, so it acts like an amplifier rather than the logic gate it was designed to be.

The two capacitors are used to configure the crystal so it operates in a specific way in the feedback path of the amplifier circuit (the internal 4060 buffer and the external resistor) to cause the circuit to oscillate at approximately the crystal's resonant frequency.

There are plenty of articles (even whole books) which have been written on the topic of crystals and crystal oscillators. Most are heavy on the math and steeped in heavy-duty electronic circuit theory jargon and analysis.

If you are thinking of building this type of crystal oscillator from scratch, be advised that there are certain logic families which are more suited to the task than other.

If you are interested in building a crystal oscillator to learn how it works, you would be better off building a linear version with an op-amp as the gain element. In this linear type of circuit you will have a sinusoidal output (rather than a square wave output with the logic gate type). This will allow you to scope the circuit and more readily understand the operational subtleties involved in its operation.

Not the answer you're looking for? Browse other questions tagged oscillator crystal passive-networks or ask your own question.