In making a breakout board for an SMD Bluetooth module, I realized that simply wiring LEDs to your signal lines is insufficient for a decent visual indication, as signal duration is too short to be visible to the eye unaided by electronics. So what is needed then is a simple circuit to extend the time the indicator LED stays on. Here's what I cam up with, with the upper circuit being for normally low situation and the lower circuit for the normally high: 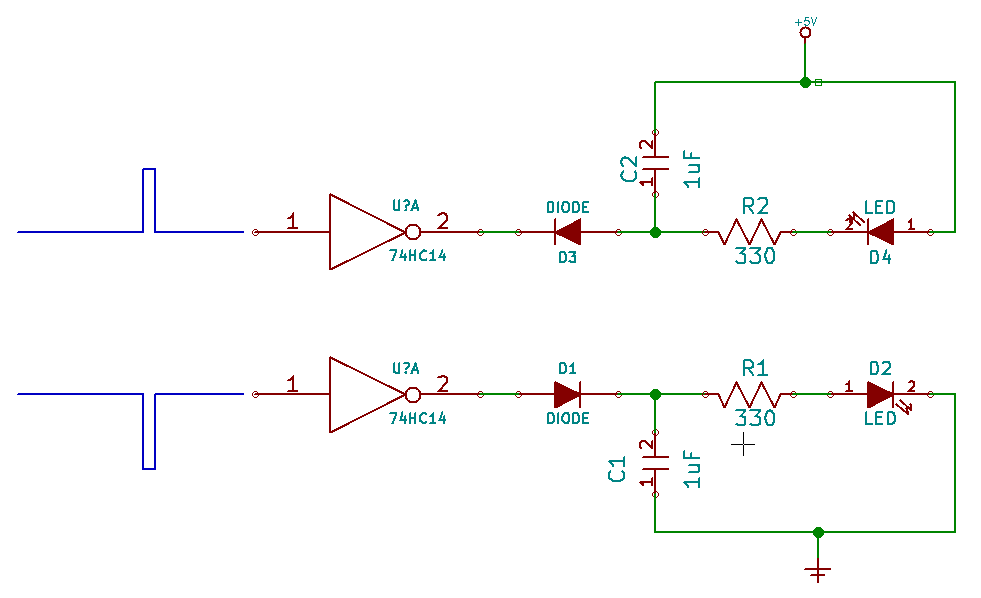 Figuring about 200ms as the minimum time the LED needs to be on, a 5V circuit, 0.6V for the diode drop, 1.6 for the LED V forward, and 330 Ohms for the current-limiting resistor, I came up with around 1uF for the cap value. The Schmitt trigger/buffer is there in order not to load the signal line. I'd like to keep this as simple as possible (just a diagnostic tool to embed in the circuit), but I probably made it too simple and missed something obvious?

The main problem with your circuit is that the time constant of 330 ohms and 1\$\mu\$F is only \$330\mu sec\$, which is not all that long, and the LED will not be especially bright for that brief time. You have to consider the physiological response of the human eye.

Your eye acts as a kind of integrator over a period in the 100msec range, so a very bright pulse of light for a short time (such as \$330\mu sec\$) would actually be visible, but it would have to be about 300 times brighter than a continuously-on light to achieve the same apparent brightness. So, an LED that is acceptably bright at 2mA would need 600mA pulse for ~300\$\mu sec\$, or to have a similar chunk of \$ current \cdot time \$ metered out to it. Since that has to come from the inverter output, it's a bit much to ask.

You could use much higher value resistors (such as 300K) and feed that to another gate, using the output of that gate to drive the LED.

As an alternative, this would be a great application for a dual monostable multivibrator such as a 74HC123. The complexity is not very different (4 resistors, 2 capacitors, 1 chip and no diodes). It's a bit different because this circuit does not stretch the existing pulse, rather it produces a visible chunk of light on every valid edge (either positive or negative, depending how you wire it) of the input signal. 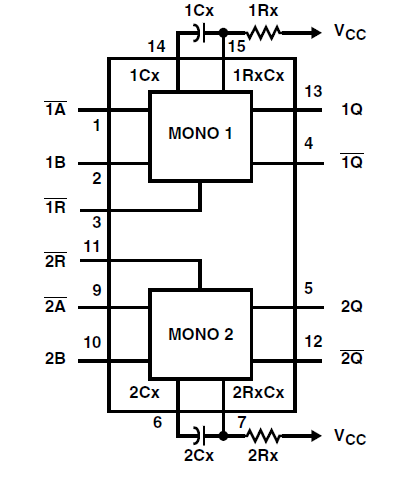 Drive the /A or B input of each multivibrator with the BT signal and tie the other one inactive. (For example, if you want it to trigger on the falling edge, use the /A input and tie the B input high). The reset input /R is active low so it should be be tied high. 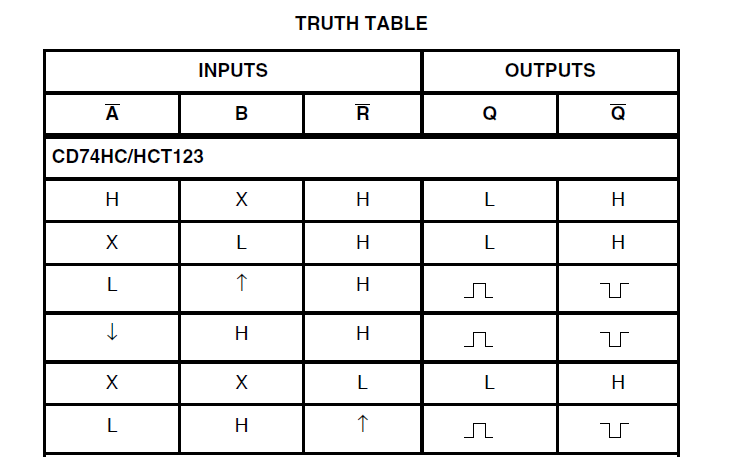 You can drive the LEDs by connecting them to Vcc through a suitable current-limiting resistor (such as 330 \$ \Omega\$ ) from the /Q outputs.

The time constant from Rx and Cx should result in a pulse that is easily visible, so somewhere in the 200msec range would be good. For the TI part, the time is \$ t_W = R_X \cdot C_X \$, so 470K and 1uF would be reasonable.

The 1uF capacitor has to supply only microamperes to keep the monostable in action, and the monstable output does the heavy lifting- providing ~10mA for ~200msec to the LED.

One gotcha is that you're asking the buffer chip to supply, within the duration of the pulse, all of the current that is going to eventually go into the LED. This is going to put a lot of strain on that buffer.

It would be better to buffer the stretched pulse again, with a second buffer that drives the LED. This will also allow the use of a smaller capacitor, since it only needs to store enough charge to activate the input of the second buffer, not enough to illuminate the LED directly.

Not the answer you're looking for? Browse other questions tagged led capacitor resistors delay or ask your own question.

2
Calculating Circuit Delay
2
Using a 1.5V battery to increase the voltage from a headphone jack so it can switch a transistor at lower volumes
1
Dimming an LED Strip (9v) with a 555 timer and MOSFET
2
Capacitor Delay Circuit
1
Need single-shot 1 minute delay-off LED circuit
2
MIDI-activity LED
5
How to introduce delay to a signal
0
Delay Low Signal, Fast High Signal
2
LED indicator - How to show 'on' when circuit is open