Why would inducing a charge of +q on one plate cause the other plate to acquire a charge of -q? I get that it would attract electrons from the other side, but the plates aren't the same distance from the electrons, so wouldn't the charge be less than q?

The following diagram might clarify what I mean. Its an explanation of why I think the charges on both plates aren't equal: 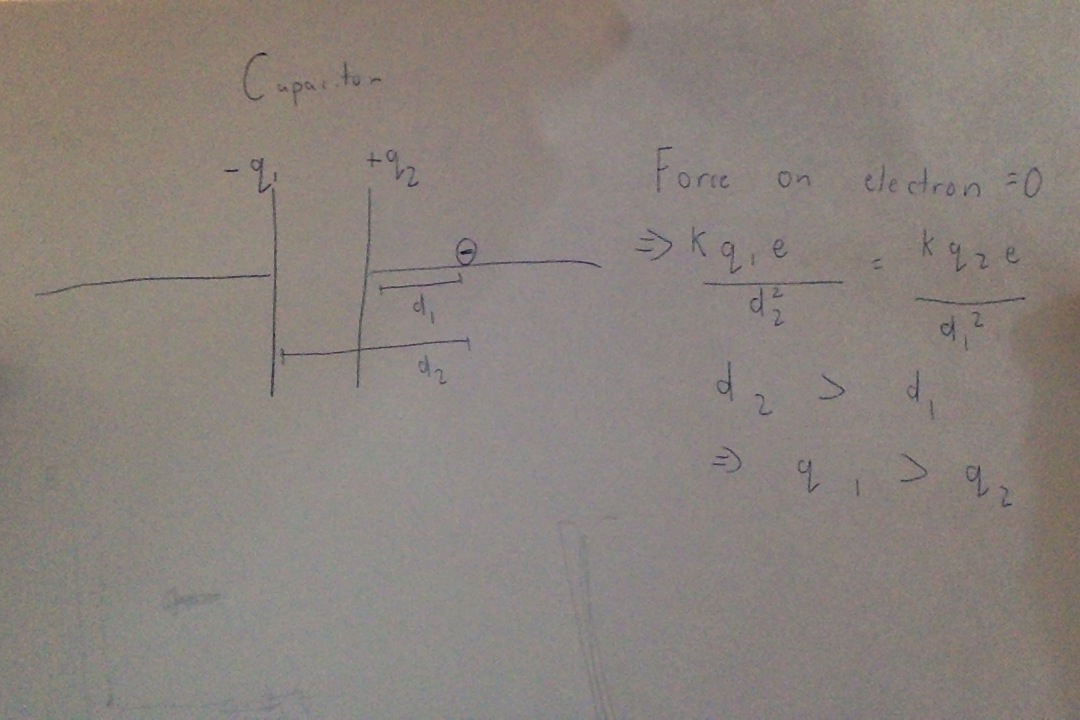 Please note I know that you can't use Coloumb's Law with plates. But Coloumb's Law allows superposition, so consider the above diagram to be the sum of all the individual point charges on the plates.

Your gap is too wide. Make it very, very very narrow. And rolled into a cylinder. Like a real capacitor.

Yes, +q could be less than -q, but only if the attraction/repulsion effects of electrons in the connecting wires were nearly as large as the attraction/repulsion down between the capacitor plates. (In that case the plates wouldn't be a near-perfect electrical shield for the fields produced by the wires.) But with real-world capacitors, this doesn't happen, and instead the field between the plate is totally enormous compared to the tiny fields produced by electrons in the wires. If +q only differs from -q by a millionth of a percent, we ignore it. See Engineer's capacitor vs. Physicist's capacitor, a split metal ball, versus two separate balls.

For capacitors used in circuitry, if we dump some charge on one capacitor terminal, exactly half of it will seemingly migrate to the other terminal. Weird. But "physicist-style capacitors" with small, wide-spaced plates are different, and an extra electron on the wire will make +q not equal to -q.

In detail: if the capacitance across the plates is 10,000pF, and the capacitance to Earth of each wire and plate is 0.01 pF, then the opposite plate's charges will ignore any small +q and/or -q on the connecting wires. The attraction/repulsion of electrons in the wires doesn't significantly alter the enormous +q and -q on the inner side of the capacitor plates.

Engineers use real-world components: wide capacitor plates with very narrow gaps; gaps the thickness of insulating film. But if you were a physicist, your capacitors might be metal spheres with large gaps between, or metal disks where the space between the plates was large when compared to their diameter. (Or you'd draw a capacitor symbol where the gap between plates was enormous and easy to see.) In this case the attraction/repulsion of electrons on the connecting wires would have an effect on the balance of +q -q between capacitor plates.

Another weird concept: make a solid stack of thousands of disc capacitors: foil disk, dielectric disk, foil disk, etc. Use half-inch wide disks, and stack them up into a narrow foot-long rod. Now connect one end to 1,000 volts. The same kilovolt will appear on the other end! The rod is acting like a conductor. Yet its DC resistance is just about infinite. Series capacitors! Each little capacitor induces charge on the next and the next, all the way to the end.

That is a pretty tortured explanation. It makes it sound like the electron's influence flows more like water than a force communicated near the speed of light. Note that the pairs of plates in the center of the series, like the + of C1 and the - of C2, ---||---these---||--- are not connected to anything else. Their total charge must be conserved, so if one side is +q, the other must be -q, and so on through the string of caps. To answer about plates with gaps, I would consider the electric field. What is the voltage across each cap in a series, and why?

The force on the electron in your diagram is NOT $$\frac{k\cdot q\cdot e}{d^2}$$ That formula is only valid for point charges (more on this later).

On capacitors, in the ideal model, which is the one you should concern yourself with for this question, an electrical field is generated, constant over all the space, with no change in regards to distance. The Positive charged plate will create fields pointing outward, and the negative charged plate will create a field oriented inward, represented by the arrows below: 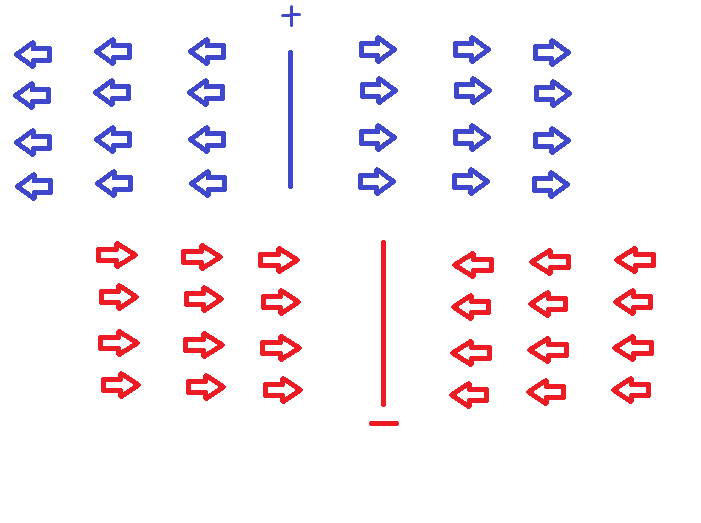 And the force on any \$q\$ charged particle is equal to this constant field \$E\$ times the charge on the particle.

As you can see, if we have equal charges on the capacitors, the field in the external regions is zero.

The field on the internal regions is constant, oriented towards the negatively charged capacitor, and (assuming the plates are equal) has magnitude \$2\cdot E\$, as represented below:

Your comment on "superposition" is also wrong, or at least grossly oversimplified. Considering now a \$real\$ model. If you actually want to superpose small charges on the plate with the charge on the wire, you would have to:

This is for one capacitor. What you would find, after using a computer program to do this on the entire system, is that the field close to the finite plane would be similar to the ideal model. The fields around the borders would be a bit different, and the external fields would die out (note: they are dying out both because the fields from the positive and negative plates are cancelling each other out, but also because the field dies down due to the infinite plate model not being valid over bigger distances).

This result can be visualized in the picture below. The force on each electron particle is proportional to the sum of all the "arrows" of where you place it.

You can see that on the point where your electron in your drawing is, there are no field components from the capacitor, so the capacitor has virtually no effect on it.

That's about as much detail as I'm going to get on the "real" model of the capacitor.

To sum things up, do yourself a favor and think about the ideal infinite-plane model, and you will see that it makes perfect sense for the charges to be equal. Your idea of superposition is wrong, and the correct way to use it would just end up giving a result identical to the original model, for all intents and purposes.

Why you would induce a charge of -q on the other plate if the first plate is given a charge of +q?

Its due to conservation of charge. Lets assume from the start that in a single capacitor everything is neutral, and that nothing is polarized. Electrons and protons are evenly distributed on both sides of a capacitor. Then you apply a voltage across the capacitor, which separates X amounts of electrons (aka the -q) from the protons (aka the +q). You have now given a +q to one side, the other side automatically has -q.

In a series capacitor, consider the following:

Not the answer you're looking for? Browse other questions tagged capacitor capacitance series or ask your own question.

1
Does a battery push and pull or only push?