Output timing is odd in VHDL

Alright I've been creating some cool stuff in VHDL but I've run into a quirky problem.

I'm creating an ALU, and attempting to write a test-bench for it, but for some reason the timing is off and my signals don't get updated properly.

When I test some logic functions they work properly, but when I reach addition it fails. My inputs update, but the addition of the two inputs doesn't update until the next cycle.

Here is a snippet of the code: "0010" is the control signal for addition.

Here are the signals' values during that cycle: A_ext is in blue, and B_ext is in red, yet the sum vector (brown arrow) has an incorrect value. Its value is actually the sum of A_ext and B_ext from the previous cycle. 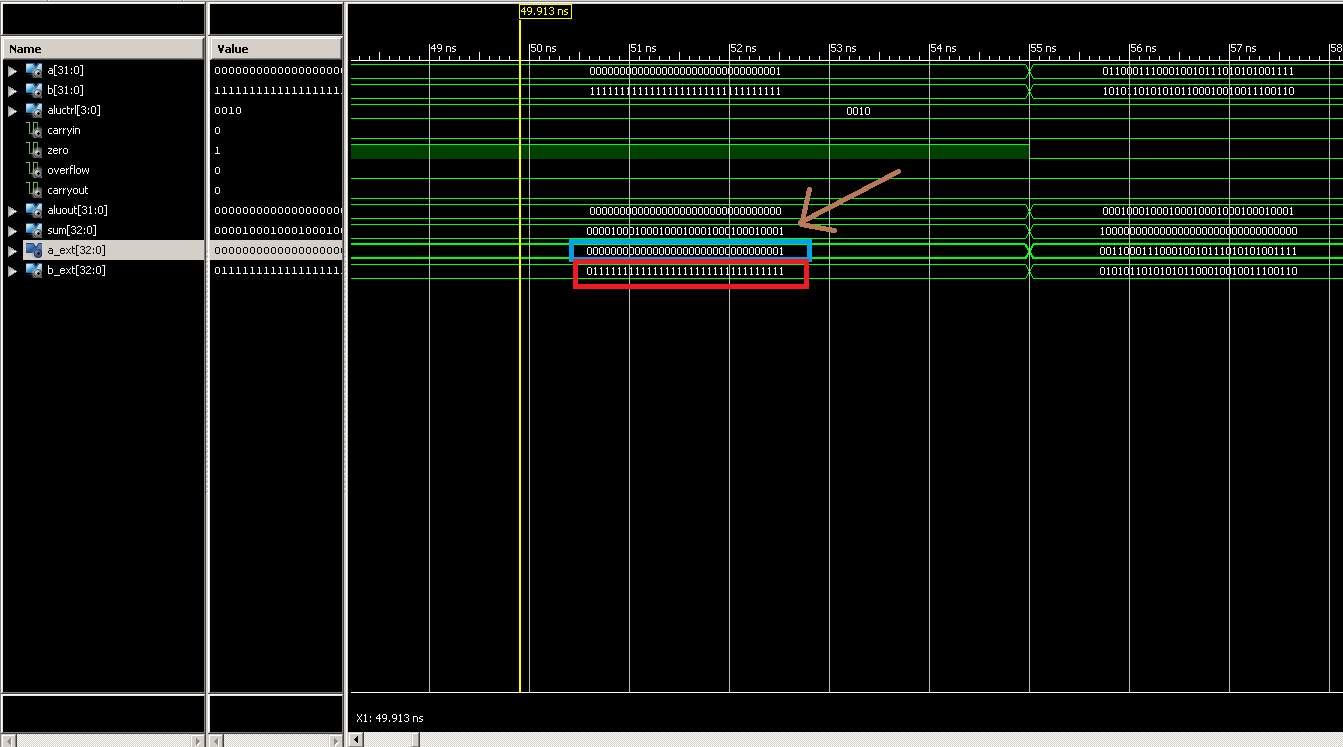 And here is the transition to the next cycle. You can see at the brown arrow that now sum has updated to the correct value from the previous cycle. 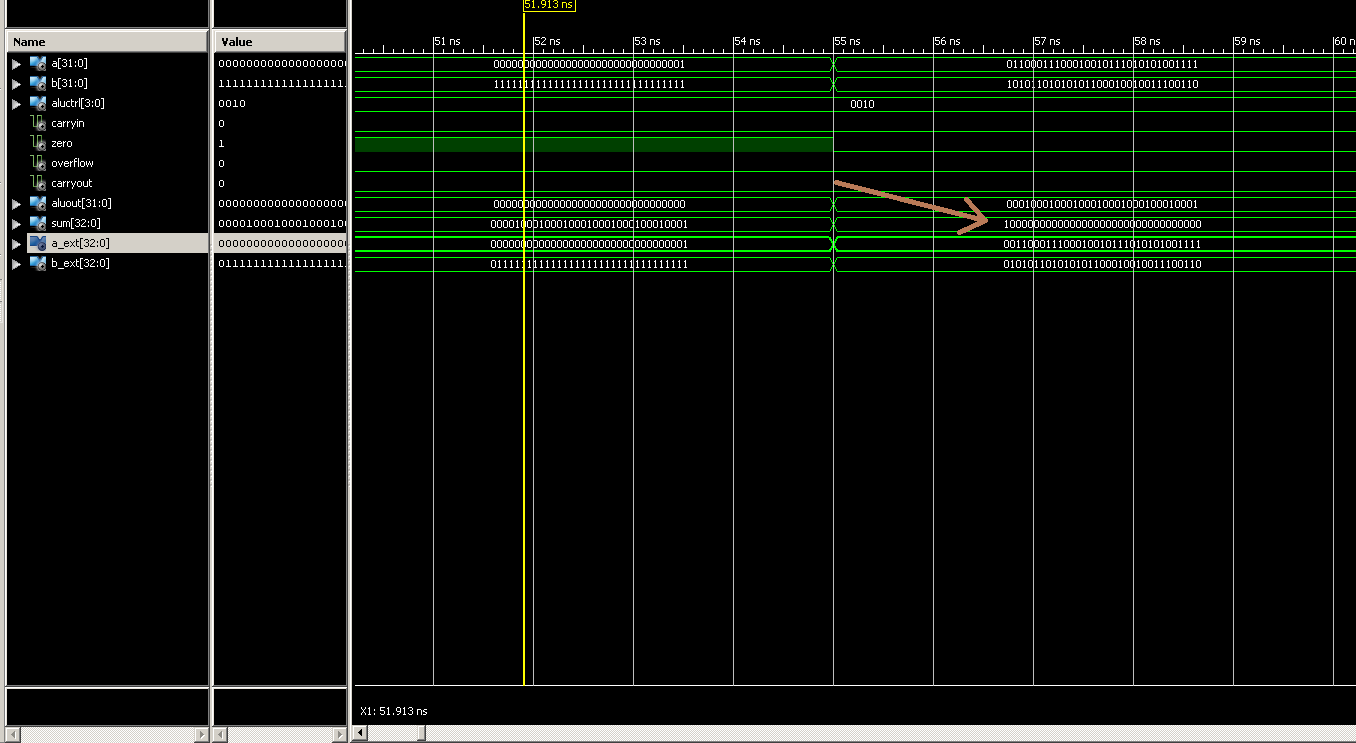 So I'm a bit confused. Is this a problem with the way my code is written, or this timing normal in VHDL and there is no way to change it?

As I said in the comment below, some of the test cases seem to update concurrently however they are in the same process and case statement as the addition test case, the test-bench cases are all coded the same way!

Notice the following picture. The red arrow points to the first test case, which is:

If the output was updating on the next cycle for EVERY test case, then the output signal above the brown arrow would be the output for the first test case, 00000000..., but it's not. 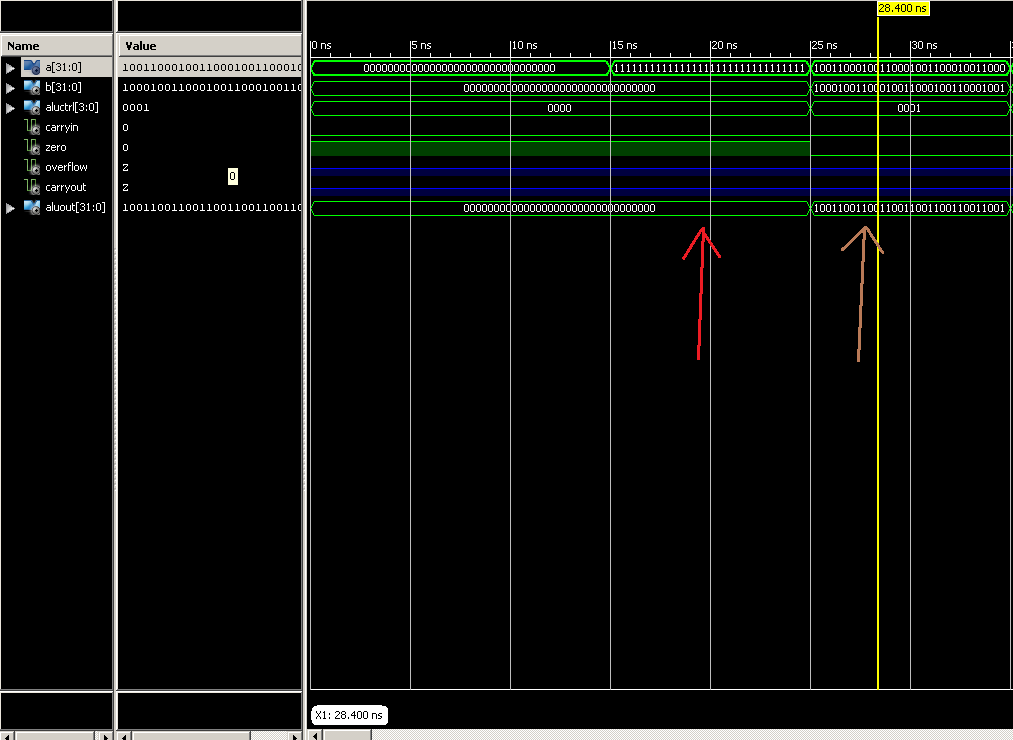 Here is a larger segment of the code. I've been using 33 bit signals, A_ext and B_ext, for the addition of the 32-bit signals, A and B because to be quite honest I don't know any other way to do it and catch the carryout bit but if someone does know a better way, I'm all for it! 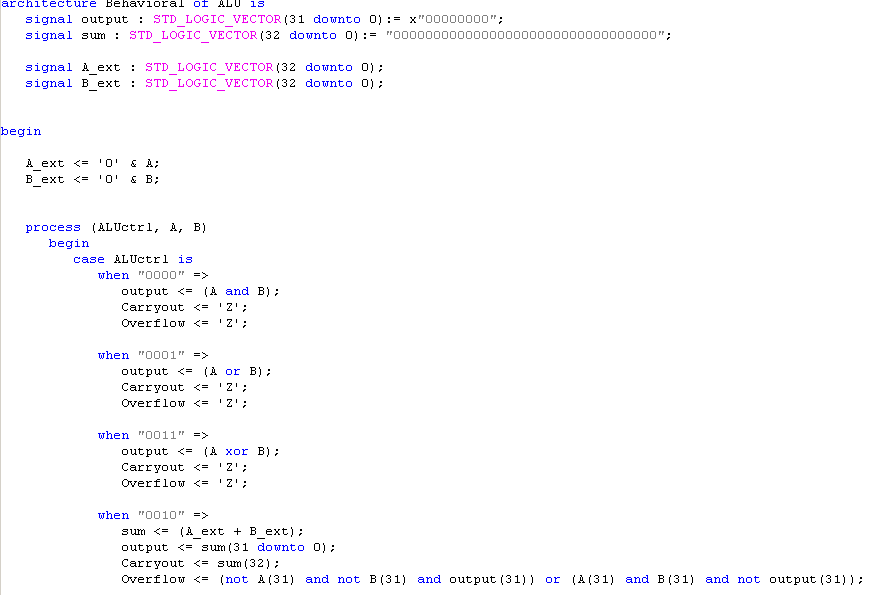 This Q&A and this webpage give the rationale behind how and why signal assignment occurs in delta cycles; understanding this is ABSOLUTELY KEY to understanding VHDL an all too often overlooked.

Alternatively if your simulator supports VHDL-2008, turn on that support and replace process(ALUctrl,A,B) with process(all) and let the tools build the correct sensitivity list for you.

0
VHDL simulation does not work
2
VHDL test bench file not accepting all set of inputs
0
Component instantiation in VHDL
0
Boost performance buffer application [Xillybus - VHDL]
0
Test cases for a calculator test bench in VHDL
2
VHDL - D flip flop simulation goes wrong
1
VHDL: Real addition leads to 'bound check failure'
1
VHDL : Not understanding Hierarchical or External Naming or how to use them
0
What is the diference between concurrent 2 “when-then”, sequential 2 “if-then” and “if-elsif” statements in VHDL?