Stack up question…return current when signal layers sandwitched between planes 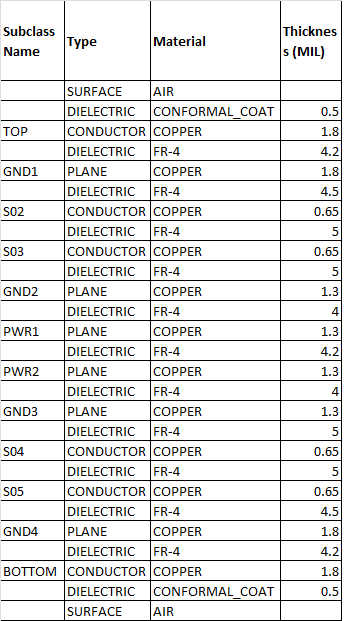 My question is, when any signal layer is having GND plane on one side (above/below) and Signal Plane on other side (above/below). whether high speed return current will couple into signal layer also equally as like in surrounding GND plane. (In some sources I read that return current will split between layers based on their distance from routing layer.)

For example: S02 layer is 4.2mil from GND and 5mil from S03 layer, when the any signal is routed in S02 whether some return signal will couple to S03 also?

One more... I read return current can couple any PCB trace (may be like cross talk).

Whether return current can couple other signal traces also, even though they don't have any path to GND?

whether high speed return current will couple into signal layer also equally as like in surrounding GND plane.

Your gnd currents will not "return" through your signal layers unless they are bypassed to gnd for some reason like power pours (which makes them high frequency gnds).

One more...I read return current can couple any PCB trace (may be like cross talk).

To avoid crosstalk and signals coupling between routing layers, make sure that you rout adjacent layers perpendicular to eachother. Avoid having traces run "on top of eachother" as much as possible.

Not the answer you're looking for? Browse other questions tagged stack-up or ask your own question.

2
8-Layer Stackup question
5
PCB Stackup - Current return path
4
AC signal and ground plane with another trace passing between - is this bad?
3
High speed signal return path in a stack-up with multiple ground planes
2
are there any differences between referencing signal to VCC or GND planes?
0
Routing of multiple impedance controlled tracks
6
Real current return path
1
Why is the signal-power-signal-ground 4 layer PCB stack frowned upon?
0
Question about proper PCB stack-up