Can the resistance between two points in air be calculated? How?

If I have just a battery, the terminals are separated by air, a very good insulator. We can say, practically, that no current flows.

From that, can we calculate the resistance between the battery terminals, knowing the dimensions of the battery, and assuming that there is an infinite space of air around the battery? What's the math?

Could this be extended for calculating the resistance between two points in an arbitrary material, of infinite volume, with a known resistivity? The practicality of obtaining an infinite volume of a thing aside, I'm wondering how resistivity relates mathematically to idealized volumes of things that aren't extruded blocks of things. (That is, not \$R = \rho L / A\$.)

Just a note: the resistance between two points in space is highly dependent on the geometry of the space. Even things far away affect the electromagnetic properties of things close by, which means the approximation isn't very good except for wide open spaces.

Ok, so to get the resistance in the setting you mentioned you also need to factor the current emitter itself. It makes no sense to ask the resistance between two points if the full geometry of the problem isn't specified (and this includes the battery).

In practice (or is it theory?), this means you have to e.g. model your two points as charged spheres with a constant +I/-I into them and solve Maxwell's equations. If you shrank you spheres too much, the current would inevitably be concentrated in a too small area, and you get rapidly increasing resistance. In other words, the resistance between any two points assuming pointwise sources is infinite -- which shows mathematically that asking "what is the resistance of the air" is incomplete -- you need to specify everything.

Edit: I forgot to add that because of the linearity of Maxwells equations in simple media with uniform conductivity like the models I exemplified, the final resistance is going to be simply proportional to the conductivity (a simple subdivision argument will convince you of this), so you can compare different (linear/homogeneous/etc) conductors directly.

It's more likely that the surfaces of the battery will form a better conduction path than the surrounding air. For instance, the surface resistivity of Nylon 66 is about \$10^{11}\$ ohms per square. See this document for other common plastics.

Given the formula for volume resistivity (R = \$\rho \cdot L \over A\$) you could calculate what an equivalent volume of air would introduce "in parallel" with the surface resistance of your battery enclosure.

However, all the notes that I find on recommendations for measuring surface resistivity suggest that the air must not be humid when taking measurements as this will lead to errors. Given that non-humid air doesn't cause a significant error when making surface resistivity measurments it's probably reasonable to assume that the dominant conducting material around the terminals of your battery is the surface of the battery's material and not the air.

So, I would say that it is an interesting but fruitless exercise to calculate the resistance of air. 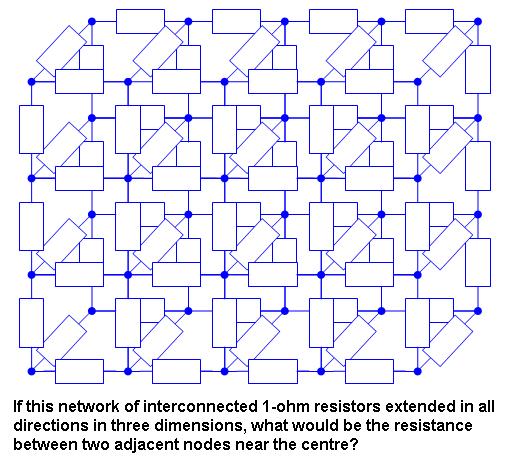 You could calculate the resistance of a rectangular block of any material from the formula R = \$ \rho \cdot L \over A\$, where L is the length of the block and A is the cross-sectional area (all in consistent units, obviously). That's assuming two conducting sheets at each end.

Actually calculating the resistivity between two electrodes of arbitrary shape immersed in a sea of conductor would probably have to be done by a numerical method such as using a field solver.

Doesn't quite make sense to look at it this way. You need to break up the air into a comparmental model, and use numerical methods to solve it (unless you can see a nice closed form solution. It might make more sense to think of it as a current or voltage field in a distributed resistivity. This is the way to thing about two electrodes in biological tissue. Might check out http://www.cmu.edu.cn/jcyxy/upl_files/20081122184243806.pdf

Not the answer you're looking for? Browse other questions tagged resistivity or ask your own question.

35
How can a one million megohm resistor be useful?
2
Is Ohm's Law violating itself?
4
Ohm's Law confusion — can there be voltage without current?

0
Why are the Resistance/Resistivity Equations Formulated as they are?
3
Electrical resistance of two conductors of equal surface area in contact with another?
0
I am trying to make a electro magnet. I bought a coil of enamel copper wire from Ebay. How do I determine its resistance?
14
How do you determine the effective resistance of a finite grid of resistors?
0
Resistance between two points in/on a large volume/sheet?
1
Are the terms “Sheet Resistance” and “Sheet Resistivity” interchangeable?
0
Calculating the resistance of curved resistive paste deposits
2
Resistance changes when keeping two ends of a metal bar constant but increasing the thickness of the middle?
0
Find the equivalent resistance of the circuit of 3 terminal voltage source