Turning the output of an opamp into a square wave

I have a 5Mhz signal which is being amplified by an OPA847 opamp.

The scope trace below is from good conditions, modulation can be seen in two places where the phase inverts: 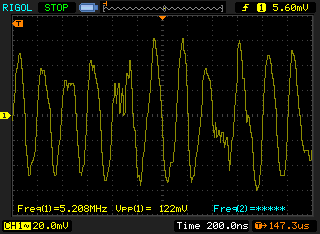 My question is quite simple: what is the best way to turn this signal into a square wave for processing by digital logic?

I have considered standard digital logic gates but I don't believe the swing is large enough. I have also considered a comparator with the input signal (biased at Vcc/2) compared to a fixed Vcc/2. I assume this would need some hysteresis but am still not sure if it's the most practical solution.

I'd use a MAX999 comparator. Feed the signal into one pin via a series capacitor and biasing resistor to mid-rail then on the other pin have a resistor feeding a capacitor so that the average level can be followed - it's called a data slicer: -

With the waveform in the OP's picture looking like it could undulate its average level a fair bit, using a data slicer probably makes sense.

The MAX999 has a 4ns propogation delay and can work from 5V or 3V3 rails. It would directly interface with logic as I have done several times on previous occasions.

As a follow-up to Andy's excellent answer above, here's some additional details and simulation results after I had researched his proposal.

I used an ADCMP601 because it is slightly cheaper, is marketed as an "Improved Replacement for MAX999" and has an ltspice model available.

The schematic below has two inputs which result in the 5Mhz signal with a lot of white noise added. This would be the output of my opamp in worst case conditions. The low-pass filter (-3dB point of ~6Mhz) is not essential but helps prevent excessive switching on the output due to the noise. Improved hysteresis might do the same thing. 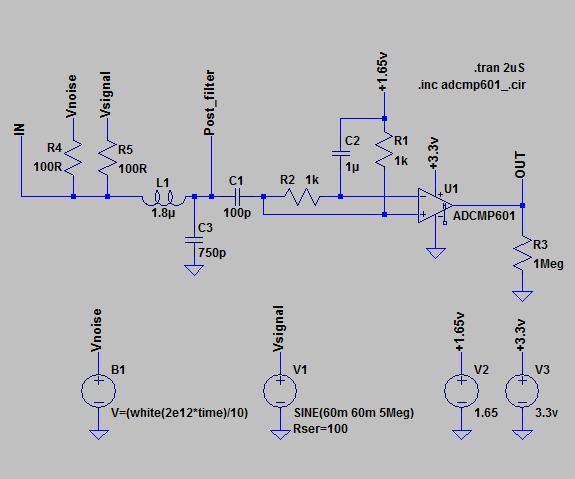 Experimenting with the data slicer was interesting, the final output is shown below. I'll use these values as a starting point for building a real circuit. 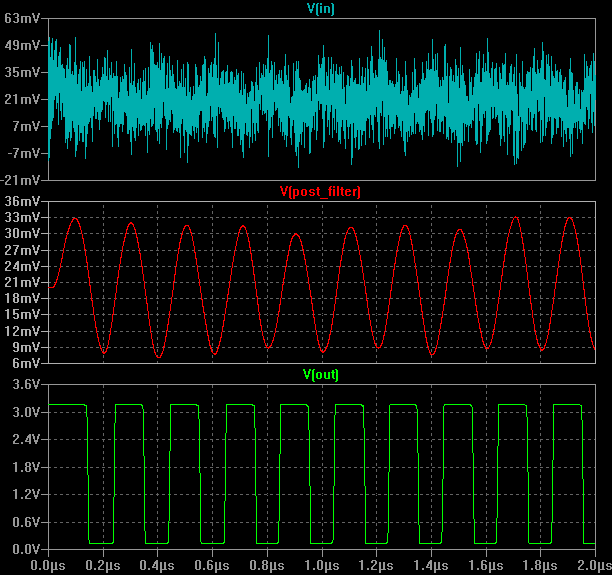 The interesting bit about Andy's idea is how the -ve input of the comparator works, instead of just using Vcc/2 as the reference. Experimenting with an input signal that changes in amplitude and DC bias shows that the comparator output is still a good square wave. The -ve node varies up and down very slightly with the amplitude and bias of the input signal. I'll probably need to play with the R/C values some more when I build a real circuit.

5
Why such analog comparator input setup?
0
Zero Crossing Detection of ~ 400 kHz Signal with MCU
1
Why does my opamp circuit give only x10 overall gain

1
Why does my opamp circuit give only x10 overall gain
0
Getting square impulses from square wave input
1
Opamp: amplifying DC bias problem in output?
2
Opamp, Amplify square wave or video
4
Some questions regarding the resistors and capacitors around an opamp
1
Transform a sinusoidal wave into a square wave with op-amp
2
Audio Transformer output straight into an opamp?
4
Programmable Electronic Load Design
0
sine wave to square wave using LT1017
0
Generating square wave to be inputted into a MCU