How to get equivalent behaviour of NOR and Nand gates, by making changes on the input side, when their inputs are attached

I have two input NAND and NOR gates, I have attached their inputs and they both give the same result as the NOT gate, that is the inverter. Now i want to make further changes at the input side, so that their result is equivalent. I have tried alot making changes in the input side, adding gates and inverters, but I am not getting the same output. Can anyone suggest something?

Who is this guy DeMorgan? He was a French mathemetician that died about 200 years ago. Did he have Nor gates and Nand gates too? Not likely, since it is known that he did not have a DigiKey account.

I suspect you mean what can you do to the 2 inputs to get equivalence at the output. Well the short answer is you need also to put an invertor on the output. Thie is deMorgan's rule: - 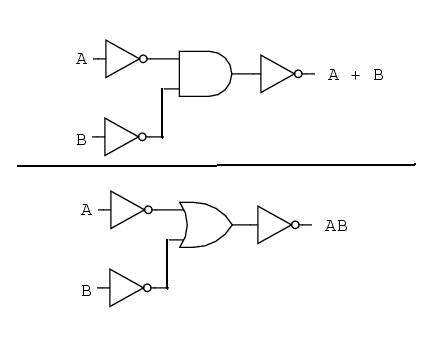 The same applies with NAND and NOR - invert all the lines on a NAND and you get a NOR and vice versa.

See also this on stackoverflow

3
What exactly are pins in the package?
3
What is the minimum number of NOR gates needed to implement a 2-input multiplexer?
10
Why is S=1, R=1 state forbidden in RS flip flop?
0
Exotic logic gate
0
Evaluate logical expression with a couple NAND gates
0
How to draw a gate diagram for F = w'x'y' + w'yz + wxz' + y'z' + wy' using only NOR gates, and w', x', y', z' inputs are not possible?
9
What are the names of all possible logic gates with 1-or-2-bit input and 1-bit output?