Is this the correct way to simulate a three-phase full bridge (6 pulses) rectifier?

I ask because I have tried this first without the two capacitors, just one, and the capacitor seems to have discharged (or charged in other direction) in some parts of the wave.

I think this is because the line-to-line without ground reference, then I added two capacitors with a ground (that is in common to neutral) like show in the image, and it seems to work fine, but it should difficult some simulations I think.

I'm correct about the assumption?

Also, is it acceptable (yes that depends on regulations and so on, but lets take as acceptable) to just wire a plug with line to line wiring (plus ground for safety), without the neutral wire as the equipment will not be connected to neutral?

@ConnorWolf suggested doing the differential measurement across the two rails. Although I have that in mind too, I didn't have doing it (but needed sometimes) and as it says its just implementing it by math using the difference between the two measured points. It worked, I just don't know how other components that my refer ground would get to work.

Also, from the comments of the non-reader @Naib I put the power supply floating removing the ground reference from its neutral (that I think is not what @Naib is suggesting, I will edit if it is), and putting the ground in the DC-Link without any high-impedance resistor.

Maybe you can add a high impedance path to the neutral, like this: 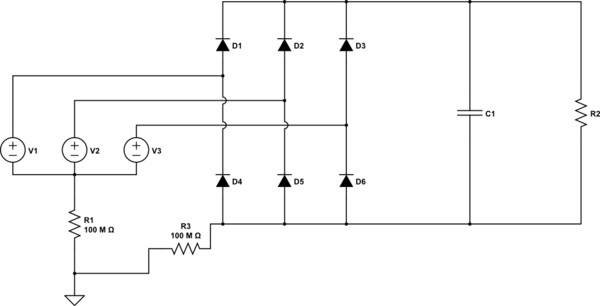 This works for me when i want to simulate a 3 phase rectifier.

Basically, the problem you are having is that simulations aren't perfect, and they get really cranky when all the nodes don't have a path to ground.

The results you're getting from the modifications as suggested in @Tinchito's answer is exactly what I would expect.

Basically, since one of the three phases is always more negative then the earth, the negative power node is basically just that voltage referenced to ground. Remember, there is zero capacitance between the earth and the negative node of your capacitors. Therefore, the time-constant of even a 100 MΩ resistor is zero, and you directly see the mains frequency applied as an AC signal superimposed on the rectified DC.

At this point, I kind of have to ask what specifically are you trying to do? Really, the second simulation would work. If you take the differential voltage from the HVDC+ and HVDC- rails, it will be what you would expect.

Not the answer you're looking for? Browse other questions tagged simulation rectifier three-phase or ask your own question.