According to a textbook that I have, when driving an inductive load with a diode rectifier, the input current becomes distorted. The illustration of the circuit below has the input as an AC source, but the text originally had this circuit as being driven from a transformer if that has anything to do with this.

The circuit (where Vx = E in the waveform diagrams): 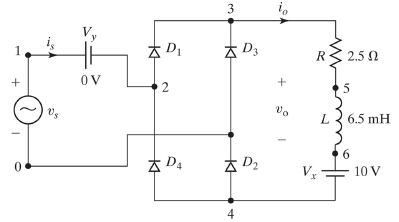 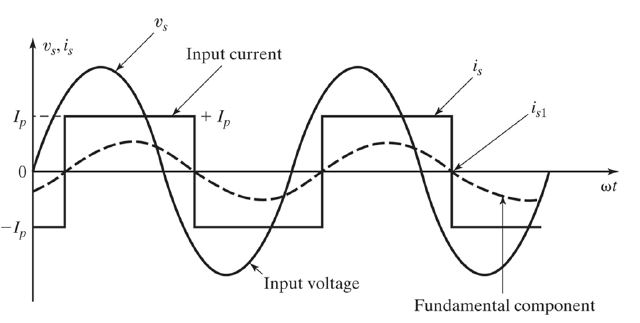 Can someone explain this?

The input current you see is a square wave but, when looked at on the load/rectified side it would resemble a constant DC current (with ripple of course because nothing is perfect).

The rapid change from positive to negative is totally caused by the inductance generating a large back emf when D1 ceases conduction. When it stops conducting the inductor still wants to keep current flowing and produces a back emf that brings D3 into play. In a perfect world that would happen instantly so yes, there will be a waveform that closely resembles a square wave with very fast transient edges.

The load "will remain almost constant with a small amount of ripple" - you can't argue with that if the inductance is sizable and 6.5mH is quite sizable compared to the 10uH neded for the average PWM buck regulator. It won't be small BUT yes there will be some ripple but hey, that's what it says in the quote.

One thing that the text book is really, really wrong about is in the graph showing line current: - 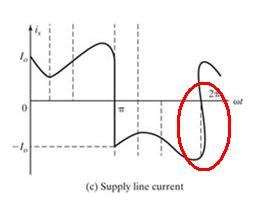 Big mistake showing the current curling back on itself. Maybe the author of the book was HG Wells?

0
How can a constant secondary side current cause a primary current to flow in a transformer?

5
How to calculate a current being drawn by a full wave rectifier diode bridge?
1
Vrip equation doesn't seem to work
2
Peak output current of a Full-Wave Bridge Peak Rectifier
1
DC or (AC + DC) coming out of a full wave rectifier
1
Output of diode clamper circuit for a sinusoidal wave input
1
Interpreting the ripple curve of a half wave rectifier
0
Rectifiers operation when there is a sudden voltage drop
0
Feedback diode question