I have two questions: 1. Does the analog pin on the arduino board get the voltage or the amperage from the circuit I connect it to? (of course it's scaled to a value from 0 to 1023)

Assuming you can only turn on one switch at a time (But also if someone turns on more than one switch, I don't want the whole thing to short out), it has a different amperage for each switch. Now, if the arduino analog pin gets amperage, then I think this is ok. But if it gets voltage, I've been told to use something called a voltage ladder, as it does the same thing but for voltage, here's my question that I asked before: https://electronics.stackexchange.com/questions/99417/what-resistors-to-use-to-read-several-buttons-with-a-single-analog-pin

And my circuit and the circuit they gave me look pretty similar to me, are they the same? Will my circuit also change the voltage due to Ohm's law?

The analog in pin measures the voltage. That pin is very high impedance, which means that not much current should flow into or out of that pin. It looks like a very big resistor to ground.

You also need to know that any time you have 2 equal resistors in series, the voltage at the point in the middle of these two resistors will always be half way between the voltages at the ends. This is a consequence of the series resistance rule that say the total Resistance of resistors in Series is just the sum of the resistors. It also makes intuitive sense.

In your diagram it is not clear where the analog in pin would go. Let's say we put it here... 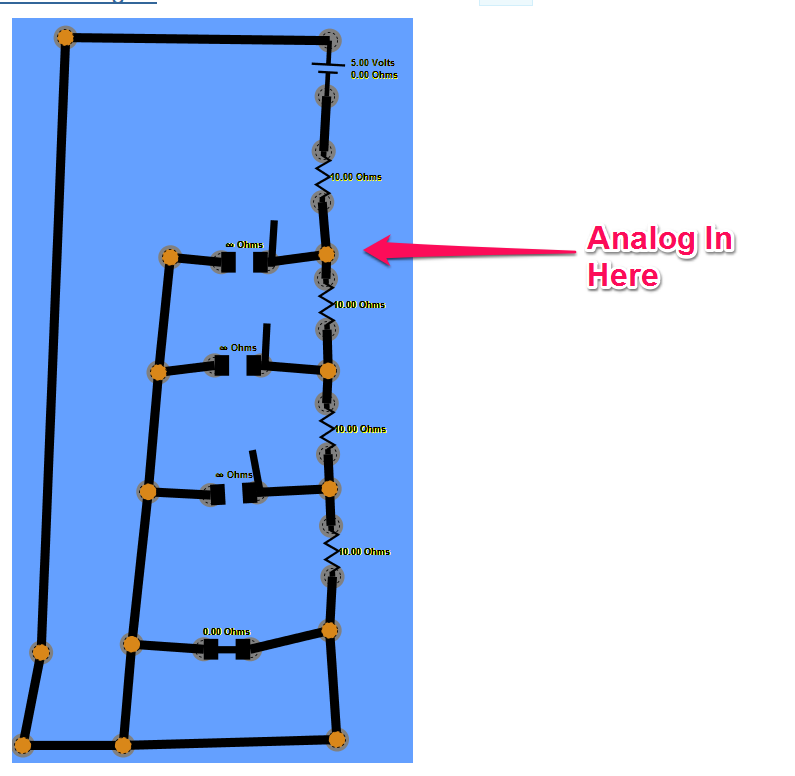 In this case, if only the bottom switch is closed, we can figure out what the voltage on the input pin would be by using ratios.

We have 4 equal resistors in series. The value of the Resistors doesn't matter for figuring out the voltage since they are equal.

The total voltage across all the resistors is 5 volts. That 5 volts is Diovided into 4 equal parts by the resistors, so the voltage at each place looks like this... 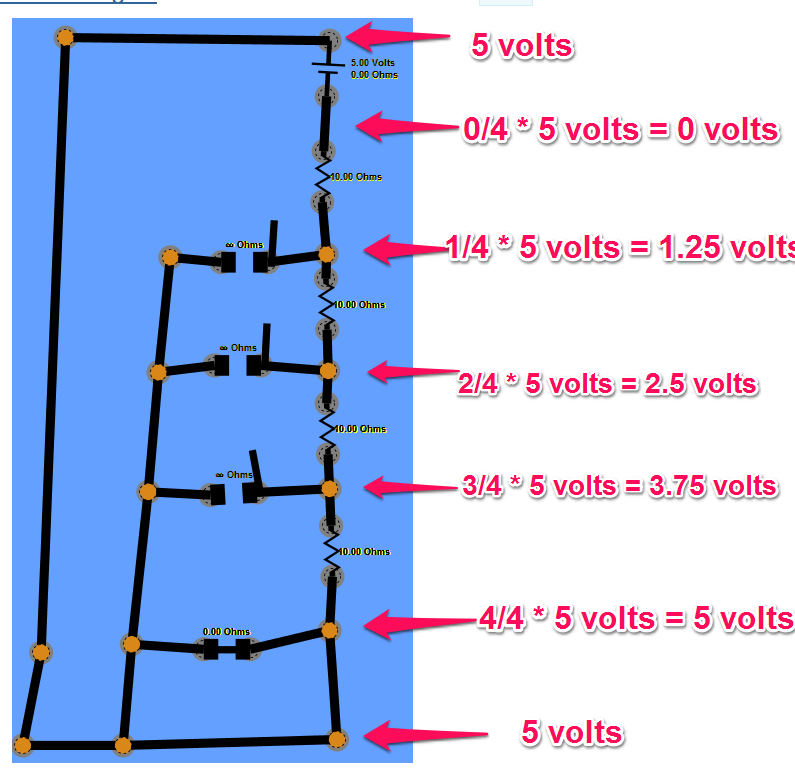 ...and your ardunio analog input should read 1.25 volts. Try it! You can also use a multimeter to test.

Now lets see what happens when we close the 2nd switch from the bottom. Now the bottom resistor doesn't really matter because all the current will flow though the newly closed switch. Now the 5 volts are divided by 3 equal resistors. Let's see what that looks like... 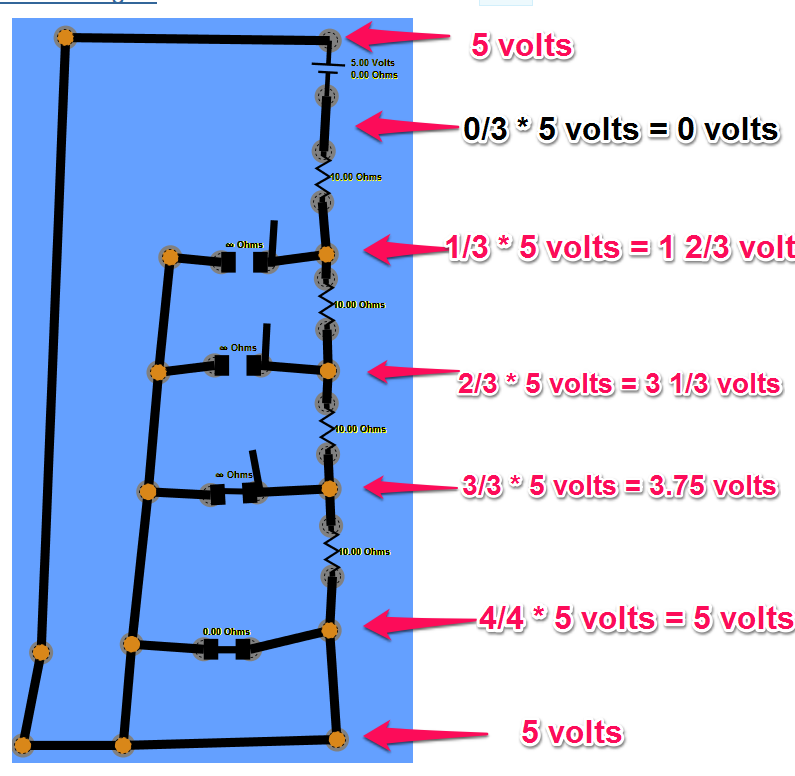 Now your ardunio analog input will read about 1.66 volts.

Repeat for the 3rd switch from the bottom and you will get about 2/5 volts at the input because now the current is only flowing though 2 resistors and you are measuring in the middle of them.

Finally, when we close the top switch, now we are effectively connecting the analog in pin directly to the +5 volts at the top of the battery, so you will see about 5 volts.

Now lets look at how you might pick possible values for the resistors. In theory, as long as all the resistors are the same then you will get the same results. In the real world, this is limited by factors including (1) the wire between the resistors has some resistance itself, (2) the analog input actually does let some current flow into it, and (3) there is a limit to how much current that battery can supply while keeping the voltage across it 5 volts.

If you pick too high a value for the resistors, then the little bit of current flowing into the analog in pin will now actually significantly impact the voltage. The input impedance (basically the same as resistance in a case like this where the signal is DC) is for an Ardunio analog input is about 100M ohms. So, if we picked 100M ohms resistors then take the case where the top switch is closed.... 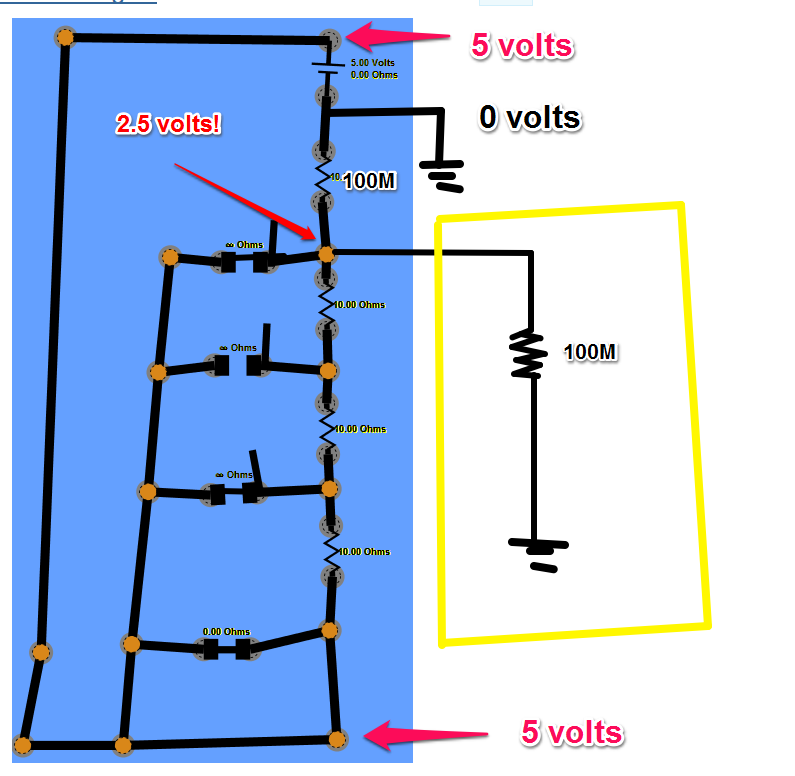 Now the reading We get is 2.5 volts because the (circuit that acts like a ) resistor inside the ardunio is equal to the resistor outside.

If we go to the other extreme and pick values that are very low, now the resistance of the wires will become important. Let's say we pick 1 ohm resistors, you should be able to see now that the wires will be in the same ballpark as the intentional resistors and throw things off that way.

Another important factor is that in this circuit, the current flowing is not really doing any work - it is there just so we can detect the resistors in the path by their effect on the voltage. We want to pick resistors large enough so that no too much current will flow and drain our battery and potentially even make a fire (high current running though a low resistor makes heat).

Turns out that 10K ohms as shown is actually a good value to use. IN the worst case when the top switch is closed, we have 5 volts / 10K ohms = 0.5 milliamps which will not be much of a burden on the battery but will still be big enough that the 100m ohms on the input pin will not even be noticeable.

Take a look at this circuit here... 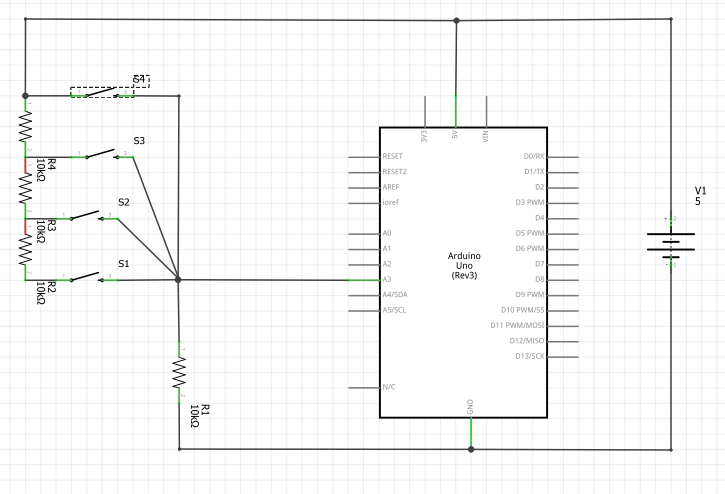 Again, all the resistors have the same value (10K in this case) to make things easy.

When all switches are open, the Analog In pin is connected to 0 volts through a resistor and there is no connection to 5 volts, so the input will be very close to 0 volts. Also interesting is that no current will be flowing, so when no switches are closed you don't use any power.

Next try closing switch S2. Now we have only 3 resistors in between 0 volts and 5 volts, so we should see about 1/3 * 5 volts ~= 1.6 volts on the analog in pin. Switch S1 and Resistor R2 now don't matter anymore. Make sense? 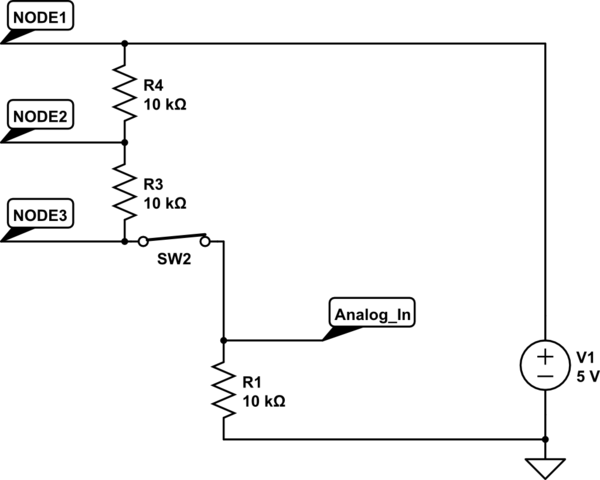 Keep going to switch S4 and you'll see that now the input pin is connected almost directly to the 5 volts. The 10K resistor that is also connecting the pin to 0 volts doesn't really matter anymore since the resistance of the wire going to 5 volts is almost zero. Now the analog in pin will see about 5 volts. 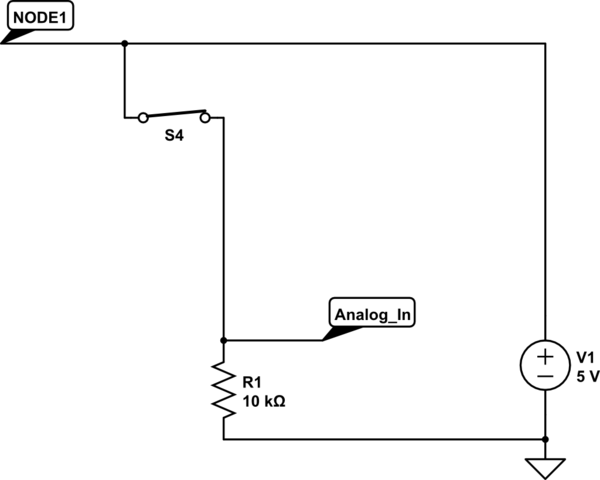 At first glance, it might looks like there is a short in the above case where S4 is closed, but let's take a closer look... 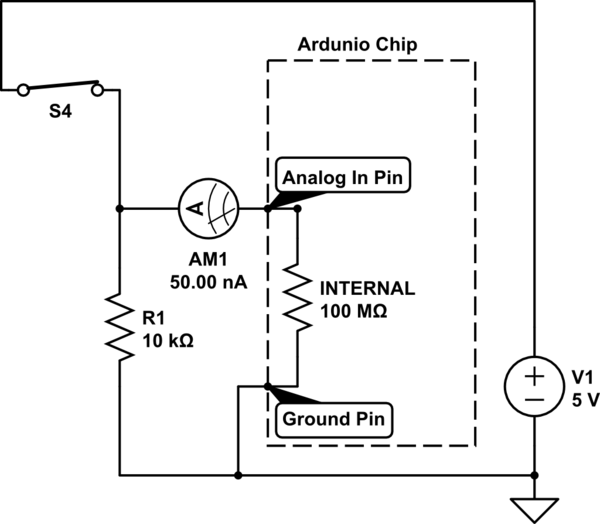 Remember that the analog input pin is "high impedance", which in cases like this basically means that it has very high resistance to the flow of current, on the order of 100M ohms. If we use V=IR with a V of 5 volts and resistance of 100M ohms, we get a current of 50 nano amps. A "nano" is 1 billionth, so you can see that very, very little current Actually flows though the input pin in this Case.

ADCs usually sense voltage, although, since their input impedance is not infinite, some current will flow into or out of the input, and the resulting current must be taken into account when selecting resistors for a voltage divider ladder.

Your sketch doesn't inidcate how you intend to connect it to the ADC, so ,I can't say if it will work as you intend.

Not the answer you're looking for? Browse other questions tagged arduino analog or ask your own question.

10
Arduino: Measure external voltage
3
Why is my MSGEQ7 circuit giving Arduino analog readings that are so high?
5
How to Debouce Six Buttons on One Analog Pin With Arduino
2
Arduino LM35DZ giving incorrect voltage
2
Sensing analog voltage on Arduino without loading the input circuit
0
Arduino detects voltage on ground
4
Arduino Uno reading analog 24v DC signal
1
harvested a joystick from a fight con, want to use it to take input into an arduino. how do I wire up the switches?
0
Controlling DC voltage with Arduino