Is it possible to modify a 5 lead unipolar stepper motor to a bipolar?

I cut the plating on the PCB and found which pair of coils could be separated :

How should I connect in the right way to get only 4 ends?

When I read your post the fist time I missed the fact that you've already cut the traces.

From the photo it appears that Node 5 the common 5th wire is brown. The first inductor pair are red-white wires, and the second are yellow-blue. If you reconnect the trace you cut between red-white(around 10 o-clock on the photo) you will have a bipolar config.

I'm not an expert so I can't tell you if this would work, but it sure looks worth a try.

Your stepper is probably wired like in the circuit below.

When you tie Node 1 to Vcc, Node 5 to GND and leave Node 2 open, then the pole L3 and L4 sit on has a given polarity. However, when you release Node 1 and tie Node 2 to Vcc, the magnetic field will turn around on this pole. The dot of the inductor is on the other side.

This also means that both inductors are in series with each other and their fields will amplify when the center node is released, and only nodes 1 and 2 are used. This would mean that the unipolar stepper would perfectly well work as a bipolar stepper with double voltage rating.

... if only the center tap wasn't connected to the center of the L1/L2. Depending on how you drive the four nodes, you may have an issue with the interconnected node 5.

As @WoutervanOoijen states in the comments, the center tap shouldn't really be a problem, provided that when a coil is de-energized both ends are disconnected. This is usually the case with an H-bridge, but must be carefully checked for the specific type you plan to use. 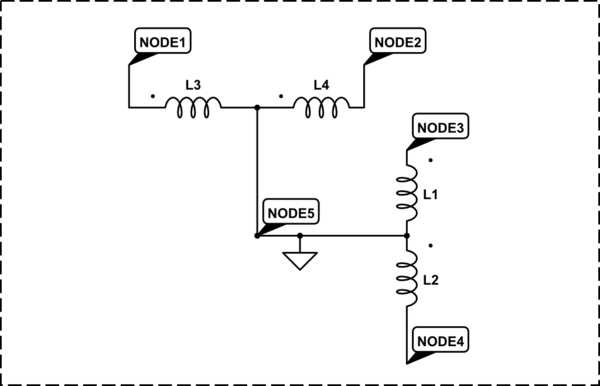 I saw this question last week and it's been bugging me. But I haven't been near a computer since then (only my phone, which sucks for editing).

I modify stepper motors from uni-polar to bi-polar on a regular basis.

My preference when changing a stepper motor from uni-polar to bi-polar is to wire the coils in parallel if possible. This reduces the inductance (as opposed to a series connection) and also reduces the resistance. The reduced inductance allows faster step speed and the reduced resistance allows higher current operation.

I strongly suspect that each pair of coils is bifilar-wound with 2 different colored wires: tan & red. That is: both wires are wound at the same time. To make the stepper uni-polar, the tan wire from one end is connected to the red wire of the other end and connected to the common point.

The quick way to find out is to gently un-solder the coil wires connecting to the common traces (brown wire) and ensure that all coil wires are now not connecting to each other. A simple continuity test will confirm which wires belong with each other (4 coils, 2 wires each).

If in fact the coil wires are as I suspect, the easiest way to convert this motor to bi-polar is to connect both wires belonging to a phase to the same solder pad going to the Yellow / Blue wires (phase A) and White / Red (phase B).

There wouldn't be any wires going to the common traces on the PCB (Brown wire).

If you hadn't hacked the board, the easiest conversion of this motor would be to cut of the wire connecting the tracks near terminal 5 (9 o'clock), and leave the brown wire disconnected.

Then you could have connected your bipolar driver A to red and white and B to yellow and blue.

You could connect a wire to the spare solder point at 1 o'clock to make a 6 lead stepper motor, once you had cut the connection near terminal 5.

Not the answer you're looking for? Browse other questions tagged stepper-motor or ask your own question.