Are wireless links symmetrical in practice?

From the top of my knowledge in the theory of EM propagation, two antennas show the same gain if used to transmit from A to B or viceversa, provided that they use the same transmission gain (reciprocity principle). And this holds regardless of reflections, directionality of the antenna and obstacles.

But is it true in practice, at least from an engineering point of view?

A linear antenna has the same gain receiving or transmitting. Likewise, the path loss is the same in either direction. This property is called reciprocity.

However, most but not all antennas are linear. Some may have losses that increase non-linearly with increasing power. For example, the loopstick antenna is a small loop antenna made of many turns of fine wire around a ferrite rod. The ferrite rod helps concentrate the magnetic flux through the loop, giving the antenna an effective aperture much larger than its physical size. However, the ferrite saturates at even modest transmit powers. Reciprocity does not hold.

It's also likewise possible to construct a propagation medium in which reciprocity does not hold, but it requires a non-linear material. Since most propagation occurs in air which is quite linear, this is more a theoretical problem than a practical one.

However, the path and the antenna are not the whole system. There are practical issues that make wireless communication links not symmetrical, meaning if A can hear B, B may not hear A. It's not an uncommon case for one station to have a higher power transmitter, especially when one of the devices is battery powered (cell phones, Wi-Fi, ...). The receivers or transmitters on either end may likewise not have identical sensitivity or selectivity.

Furthermore, the different location of each station can lead to asymmetric communications. The hidden node problem you mention is one case. It can also be that there is a source of noise that's close to A, but far from B. In this case, B may hear A, but A may not hear B due to the higher noise floor in A's location. Related is the exposed node problem.

These issues of asymmetric link quality are very significant in the design of wireless communications in practice. A common solution is to have the station with the likely biggest, tallest, highest power antenna arbitrate access to the medium. Cellular networks take this approach: the tower tells the phones when they may transmit. Cellular towers also have wired links to each other to further improve their cooperation. It's a much more difficult problem when a central authority does not exist. See for example version two of B.A.T.M.A.N. which was developed primarily to address this problem in its mesh protocol.

Just after posting the question I though about a phenomenon that can make the link, if not physically, practically asymmetrical. It's the hidden node problem. 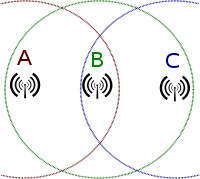 Yes, it is true. This is a fundamental property from physics. If it were not true, you could construct a perpetual motion machine by exploiting the assymetry.

I noticed that fast fading was not mentioned. Spatially distributed constructive/destructive interference patterns exist from multi-path reflections between transmitter and receiver. For a device in motion, these manifest as temporal dips in the channel gain (fast fades). Whether fast-fading on forward and reverse path are the "same" depends on several things, among them, whether forward and reverse channel are on the same radio frequency, and whether forward and reverse channel are used at the same time. The question asked about symmetry "in practice". Re fast fading, the answer is No and Yes. Modulation, coding and scheduling strategies are highly optimized to be aware of fast fading. So propagation path asymmetry may indeed be present in the system, but clever designs are immune to this and even take advantage of it so that it is not noticed by end users.

Not the answer you're looking for? Browse other questions tagged rf communication antenna or ask your own question.

33
Why is an inductor not a good antenna?

6
MIMO: How Can Two Antennas So Close Together Receive Different Signals?
9
How does frequency affect the ability to traverse objects in RF transmissions?
2
EM MWD Gap Sub Telemetry Theory Explanation in Drilling Applications
1
How can I amplify 868MHz transmission done with a wire antenna?
2
basic RF transission in noisy environment
3
Can 900MHz and 2.45GHz Antennas be differentiated by shape?
30
Why is 50 Ω often chosen as the input impedance of antennas, whereas the free space impedance is 377 Ω?
0
Antenna's resistance: meaning and evaluation
3
Using open termination to intentionally reflect RF signal