I'd like to build a simple AM radio (so simple it will only receive a single AM channel).

What is the simplest way to build a single channel AM radio that will output to an 8ohm speaker? (e.g. 1030 AM)

My current thinking is along the following somewhat vague lines, but I'm hoping to make them more concrete.

Aside from the antenna, I would prefer to use "discrete" off the shelf components such as capacitors and inductors of particular values that I could plug into my breadboard.

Your basic strategy to use a piece of wire for the antenna, into a L-C resonant circuit tuned to the frequency of the desired station, amplify that, then connect to a speaker is on the right track but misses at least one important step. That is to detect the AM signal, or to demodulate the amplitude modulated radio signal to get the original audio signal.

After the demodulator, you should also add a stage to drive the 8 Ω speaker with. That will be a stage meant to produce power, not necessarily amplify the voltage. To skip this, you can make just a line level audio signal and feed it into some ordinary audio amplifier, or powered speaker like you would hook up to a PC sounds card. The powered speaker is really just a power amplifier and speaker in a single box.

The simplest AM detector is just a diode. The output of the diode effectively rides the peaks of the RF signal, and goes up and down with its amplitude. You set up the impedance driven by the diode such that the output decays slowly enough so that it doesn't change much in the gap between carrier cycles, but does change fast enough to follow the modulated signal. Fortunately this isn't too hard since there is a large frequency ratio from audio to carrier. If the highest audio frequency is 5 kHz and the carrier is 1 MHz, then you have 200:1 difference.

A even better way to make a detector is to use a bipolar transistor as emitter follower. You can think of this as a powered diode in this application:

This audio out signal can probably be fed directly into a PC "powered speaker".

Simplest possible AM receiver that outputs to an 8 ohm speaker: 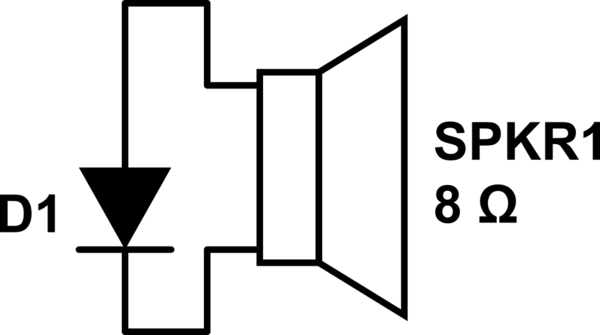 It is however, without a doubt, the simplest radio that meets your requirements. It works because the voice coil can pick up RF currents just like an antenna, and these currents will move the diaphragm. It will help to use a very cheap speaker, since these have worse shielding.

You will need to be quite close to the transmitter for it to work however, due to the poor sensitivity. And also far from other transmitters, because it pretty much has no selectivity. Being entirely passive and also being very insensitive, the speaker won't be very loud, and since speakers aren't really intended to be operated in this manner, I'm sure the audio fidelity will be horrible. It is, however, obviously maximally simple.

While not an especially good receiver, it is an instructive example, and it does work. It demonstrates that radios aren't magic, and electromagnetic radiation can interact with just about anything. The only thing you need to receive AM is a detector: anything that responds to current differently in one direction or another.

Some of the simplest AM radio receivers were based on the ZN414 - a radio on a single chip in a TO-92 package. (replaced by the MK484). 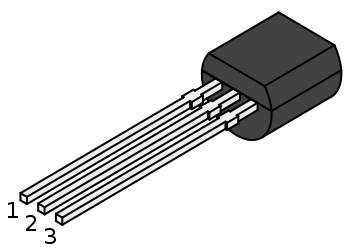 It is poorly suited to drive an 8\$\Omega\$ speaker directly (it won't be very loud) but you could add an LM386 amplifier as shown here.

If you really want to work with discrete transistors rather than ICs hiding in transistor packages, you could just follow up that tuned loopstick-capacitor circuit with a diode detector (a germanium such as a 1N34A or Schottky diode such as a BAT54 would be best) and an audio amplifier. The missing part of your list is the detector, which converts the RF envelope into audio.

This is the speaker variant of my crystal radio. 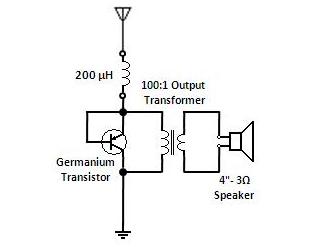 Output impedance of the order of a few hundred ohms necessitates use of a matching transformer for the speaker.

A power transformer, with its inherent thick conductors, is an ideal substitute for a low-loss output transformer.

Reception of the lone local 200kW 612kHz AM broadcast station, located 20km away, is quite good.

The circuit of my simple AM demodulator :

Not the answer you're looking for? Browse other questions tagged audio rf am or ask your own question.

2
Simple radio serial communication
10
How does an AM radio filter out only the desired frequency?
3
Simple AM radio - how to modify it so it can work without ferrite rod antenna?
1
Daisy chaining a headphone amplifier with a speaker amplifier
1
How to radiate a positive oscillating voltage?
2
AM radio wave LED indicator
2
Simple frequency-tunable spark generator?
0
How to turn on LED using RF as a catalyst?
9
Hearing only noise and ticking sound with simple AM radio - The art of electronics
1
BJT Amplifier Simulation