Peter Bennett's got a point about the minimum and maximum voltages that can be present at the inputs, but I'm not certain it's the problem here. First off, we can look at the behaviour of your op-amp. With no input, it's being driven to the rails, as it's called. Basically, an op-amp's maximum range is it's positive and negative supply voltage, less a small amount, referred to as it's headroom. For modern op-amps, the headroom is usually less than a volt. For older op-amps, like the 741, the headroom required for the internal circuitry is much more. This should be specified on the specification sheet, if you're curious. I recommend http://www.datasheetcatalog.com/ as a source for that, although you can always get datasheets at the manufacturer's website. That describes the output voltage you're seeing from the op-amp. Rail voltage less some amount of headroom, likely a volt or so. It doesn't describe why you're seeing it, though. For this, you'll need to learn about how an op-amp actually works, and where a real op-amp differs from it's ideal model.

While I'm not certain of what your electronics background is, it seems like you're expecting the output of your op-amp to behave something like \$v^+ - v^- = v_{out}\$. That's an okay mental model of the op-amp, but it's missing one element, the gain. A better mathematical model is \$K(v^+ - v^-) = v_{out}\$, where K is a number. A really big number. Like, 100,000 or so (it's in the spec-sheet. Look for the Gain-Bandwidth Product). A real op-amp can't output at a voltage outside the range of it's supply voltage, so it's being driven to the rails hard. What you can do (and I'll add some schematics later) is add negative feedback to the circuit, which decreases the gain to a more manageable level. For a straight difference, you want the gain to be 1.

Finally, we want to know why the op-amp is outputting a voltage at all. For that, you need to know even more about the non-idealities of op-amps. Basically, everything inside that puppy is transistors. If I remember the 741 schematic, you're looking at 14 or so BJTs. I think wikipedia has an article that shows the schematic, if you're so inclined. At the input of the 741 is what's called a differential amplifier. This takes the difference between the two inputs, and outputs the result, where it's later buffered, most likely. The problem is that this takes at least four BJT transistors, and every transistor's going to be different. This creates small little dc biases in the differential amplifier, so even if you were to connect the \$v^+\$ and \$v^-\$ pins together, you would still see the op-amp driven to the rails. With a gain of 100,000, even 1 microvolt of difference is a big error.

As an aside, the 741 is an eight-pin package. Check out the spec-sheet, and you'll see that two of them, if I recall, are labelled null offset. These pins are actually used to slightly offset the differential amplifier, removing that error in the output. Newer op-amps are a lot more precise, and don't need to offer that functionality anymore. I still wouldn't recommend nulling the op-amp without reducing that gain first, though.

I'm going to hit you with something big. 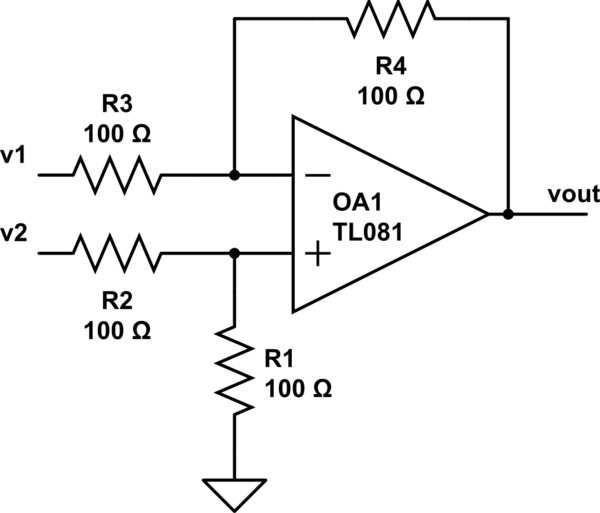 WHAM! I stole that diagram from http://www.electronics-tutorials.ws/opamp/opamp_5.html . Give that whole string of articles a read, it's really great. This is an op-amp circuit that can be used to take the difference of two inputs. It's a bit of a handful to analyze if you don't have much of an electronics background. From a quick glance in my old textbooks, the output of that circuit is something on the order of $$v_{out} = \frac{v_2*R_1(R_3+R_4) - v_1*R_4(R_1+R_2)}{R_3(R_1+R_2)}$$ This is a fairly elementary circuit, and you should be able to find it easily in any university or college-level textbook, or online. Basically, if you want your subtraction operation with a gain of 1, just make all the resistors the same (I recommend 10K resistors). The equation reduces to \$v_{out} = v_2 - v_1\$.

In short this is due to imperfections in the opamp that are naturally present. Opamp 741 has an in built offset voltage, that is present between the inverting and non inverting inputs. This small offset voltage when amplified by the open circuit gain of the opamp saturates the output voltage. Here is a nice description of the cause and also way to remove this offset voltage from your circuit. http://www.analog.com/static/imported-files/tutorials/MT-038.pdf

The 741 is designed to operate from +/- 15 volt supplies, and under those conditions, the inputs should not get within 2 - 3 volts of the supply pins. This doesn't leave much room for operation on a 5 volt supply!

However, you may get a sensible output if you connect the inputs together, and to a voltage divider holding them at 2.5 volts (no guarantees, however, as you're trying to use the thing well outside its design specs).

Either use higher bipolar supplies, or find an op-amp designed for use on a single 5 volt supply.

Your op amp is saturated at a maximum output value, plus you are operating well below recommended supply voltages.

There are some things wrong with your assumption. First, unconnected inputs are "floating", and if both inputs are floating, that certainly does not mean they are "the same".

Next, you are correct that the output of an open-loop op amp is the difference between the input terminals multiplied by a gain. The issue is that the open loop gain is very big-- usually about \$10^5\$, and in the ideal, \$\infty\$. When you multiply a very small number, say 1mV (which is not an unreasonable bias voltage for a 741), times \$\infty\$, the answer can be very big. \$1\,mV \times 10^5= 100V\$, and will saturate your output. You would probably see this behavior even if you grounded your inputs, instead of leaving them floating.

Not the answer you're looking for? Browse other questions tagged voltage operational-amplifier integrated-circuit or ask your own question.

0
Strange behavior with CA3130EZ op amp in follower configuration
4
DAC + op-amp buffer just keeps dying
-1
What happens to an op-amp with inputs and outputs connected to +V?
1
Calculating voltage at non-inverting input of the op-amp
1
Why does the 741 op-amp saturate to the top rail when inputs both grounded?
0
How to get the 741 op amp to work as a linear amplifier?
4
How op-amp stabilizes?
2
Op-Amp output inconsistent with theory