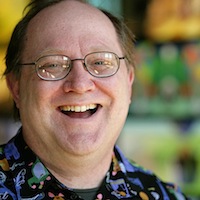 I'm a Software Engineer at Google where I work on machine learning planning systems.

From 2001-2015 I was the Pixar Tech Lead of the Data Management Group. My 50-year charter was to store and catalog all data and metadata related to the Studio's feature films. This system ("Templar") is in use to this day.

From 1997 to 2001 I lived in Beijing, China and was the Chief Software Architect at AsiaInfo, the company that built China's Internet. While there my software was used to grow the China Internet from 200K to 65M users. The last I heard they were at 350M+ users.

I studied computer science and worked in Texas for many years. I wrote a couple of computer books... the best one was in print for 20 years.

Feel free to drop me a line!